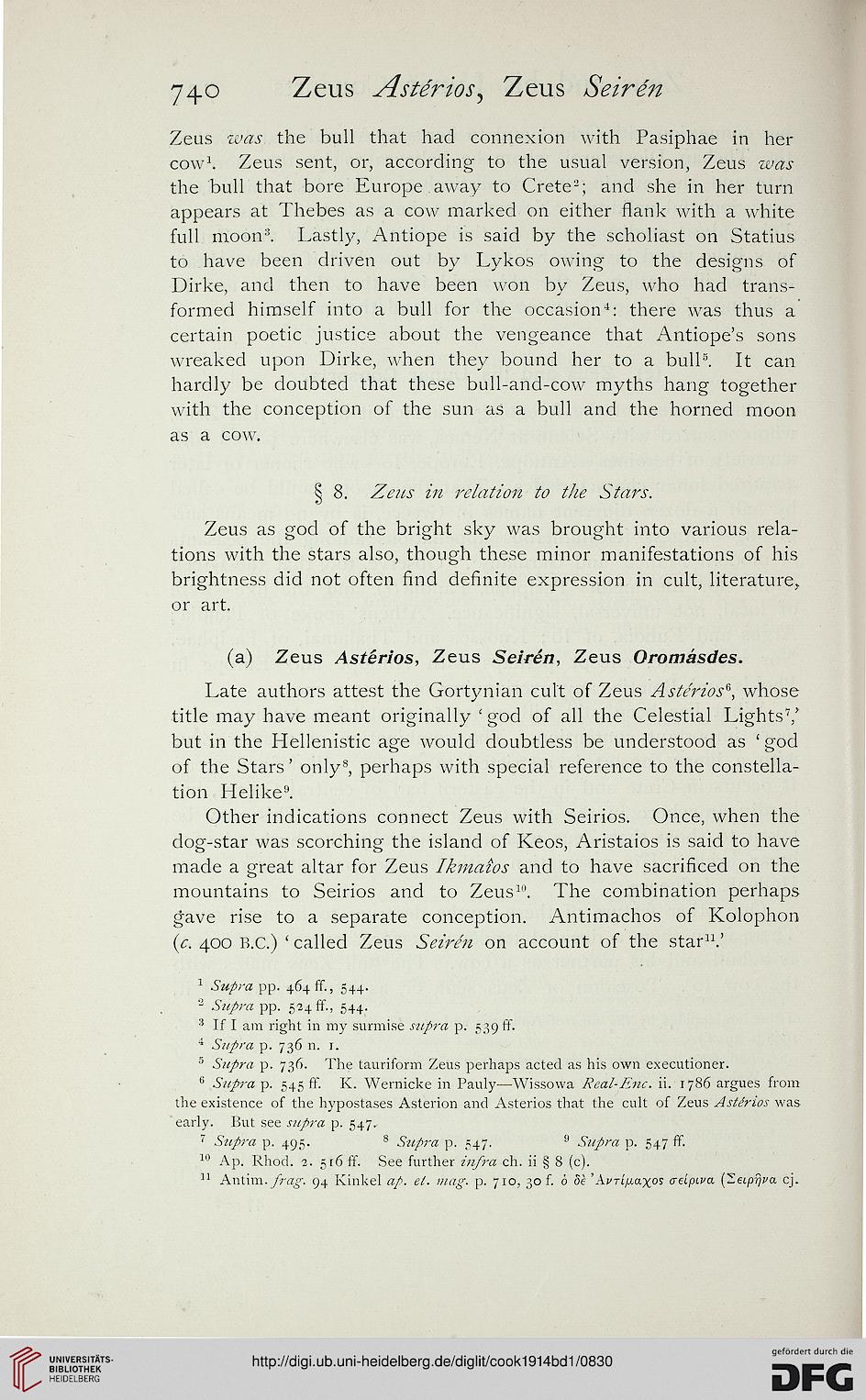 Zeus was the bull that had connexion with Pasiphae in her
cow1. Zeus sent, or, according to the usual version, Zeus was
the bull that bore Europe away to Crete2; and she in her turn
appears at Thebes as a cow marked on either flank with a white
full moon3. Lastly, Antiope is said by the scholiast on Statius
to have been driven out by Lykos owing to the designs of
Dirke, and then to have been won by Zeus, who had trans-
formed himself into a bull for the occasion4: there was thus a
certain poetic justice about the vengeance that Antiope's sons
wreaked upon Dirke, when they bound her to a bull5. It can
hardly be doubted that these bull-and-cow myths hang together
with the conception of the sun as a bull and the horned moon
as a cow.

Zeus as god of the bright sky was brought into various rela-
tions with the stars also, though these minor manifestations of his
brightness did not often find definite expression in cult, literature,
or art.

Late authors attest the Gortynian cult of Zeus Asterios6, whose
title may have meant originally ' god of all the Celestial Lights7/
but in the Hellenistic age would doubtless be understood as ' god
of the Stars' only8, perhaps with special reference to the constella-
tion Helike9.

Other indications connect Zeus with Seirios. Once, when the
dog-star was scorching the island of Keos, Aristaios is said to have
made a great altar for Zeus Ikmaios and to have sacrificed on the
mountains to Seirios and to Zeus10. The combination perhaps
gave rise to a separate conception. Antimachos of Kolophon
(c. 400 B.C.) ' called Zeus Seiren on account of the star11.'

5 Supra p. 736. The tauriform Zeus perhaps acted as his own executioner.

6 Supra p. 545 ff. K. Wernicke in Pauly—Wissowa Rcal-Enc. ii. 1786 argues from
the existence of the hypostases Asterion and Asterios that the cult of Zeus Asttrios was
early. But see supra p. 547.