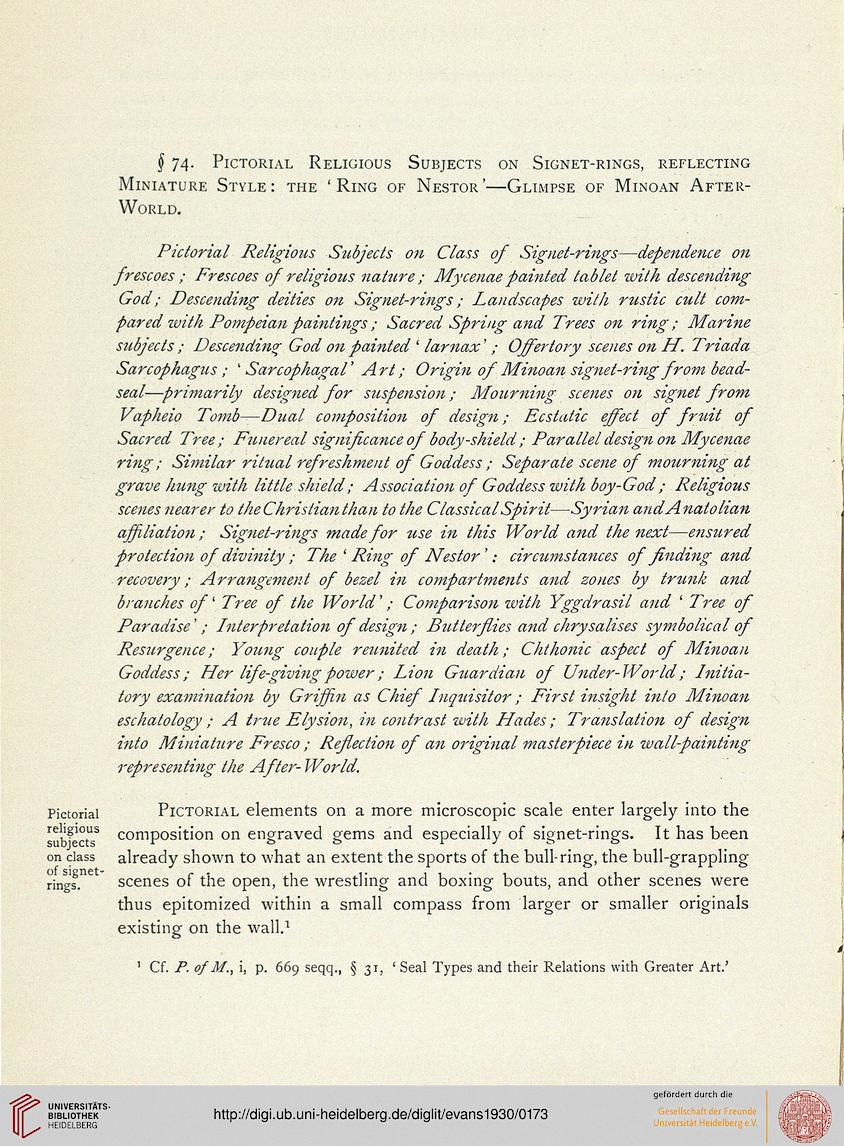 Information about OCR text
§ 74- Pictorial Religious Subjects on Signet-rings, reflecting
Miniature Style: the 'Ring of Nestor'—Glimpse of Minoan After-
World.

Pictorial Religious Subjects on Class of Signet-rings—dependence on
frescoes ; Frescoes of religious nature ; Mycenae painted tablet with descending
God; Descending deities on Signet-rings • Landscapes with rustic cult com-
pared with Pompeian paintings; Sacred Spring and Trees on ring; Marine
subjects ; Descending God on painted ' lamax'; Offertory scenes on H. Triada
Sarcophagus; ' Sarcophagal' Art; Origin of Minoan signet-ring from bead-
seal—primarily designed for suspension; Mourning scenes on signet from
Vapheio Tomb—Dual composition of design; Ecstatic effect of fruit of
Sacred Tree; Funereal significance ofbody-shield ; Parallel design on Mycenae
ring; Similar rittial refreshment of Goddess ; Separate scene of mourning at
grave hung with little shield; Association of Goddess with boy-God; Religious
scenes nearer to the Christian than to the Classical Spirit—Syrian and Anatolian
affiliation ; Signet-rings made for use in this World and the next—ensured
protection ofdivinity ; The 'Ring of Nestor': circumstances of finding and
recovery; Arrangement of bezel in compartments and zones by trunk and
branches of' Tree of the World'; Comparison with Yggdrasil and ' Tree of
Paradise'; Interpretation of design ; Butterflies and chrysalises symbolical of
Resurgence; Young couple reunited in death; Chthonic aspect of Minoan
Goddess; Her life-giving power; Lion Guardian of Under-World; hiitia-
tory examination by Griffin as Chief Inqtiisitor; First insight into Minoan
eschatology ; A true Elysion, in contrast with Hades; Translation of design
into Miniature Fresco ; Reflection of an original masterpiece in wall-painting
representing the After- World.

religious composition on engraved gems and especially of signet-rings. It has been
on class already shown to what an extent the sports of the bull-ring, the bull-grappling
scenes of the open, the wrestling and boxing bouts, and other scenes were
thus epitomized within a small compass from larger or smaller originals
existing on the wall.1