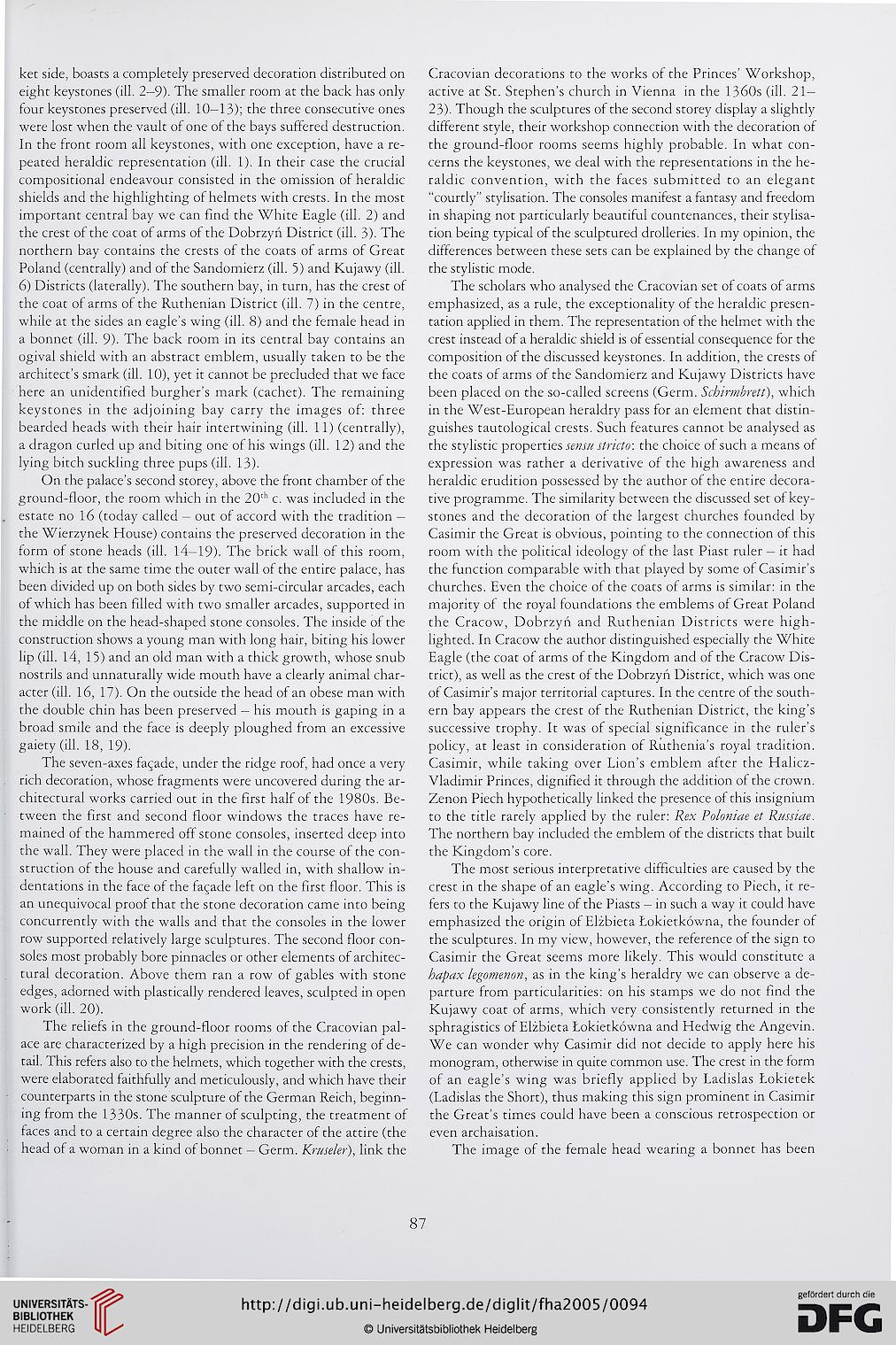 Information about OCR text
ket side, boasts a completely preserved decoration distributed on
eight keystones (ill. 2—9). The smaller room at the back has only
four keystones preserved (ill. 10—13); the three consecutive ones
were lost when the vault of one of the bays suffered destruction.
In the front room all keystones, with one exception, have a re-
peated heraldic representation (ill. 1). In their case the crucial
compositional endeavour consisted in the omission of heraldic
shields and the highlighting of helmets with crests. In the most
important central bay we can find the White Eagle (ill. 2) and
the crest of the coat of arms of the Dobrzyń District (ill. 3). The
northern bay contains the crests of the coats of arms of Great
Poland (centrally) and of the Sandomierz (ill. 5) and Kujawy (ill.
6) Districts (laterally). The Southern bay, in turn, has the crest of
the coat of arms of the Ruthenian District (ill. 7) in the centre,
while at the sides an eagle’s wing (ill. 8) and the female head in
a bonnet (ill. 9). The back room in its central bay contains an
ogival shield with an abstract emblem, usually taken to be the
architect’s smark (ill. 10), yet it cannot be precluded that we face
here an unidentified burghers mark (cachet). The remaming
keystones in the adjoining bay carry the images of: three
bearded heads with their hair intertwining (ill. 11) (centrally),
a dragon curled up and biting one of his wings (ill. 12) and the
lying bitch suckling three pups (ill. 13).

On the palace’s second storey, above the front chamber of the
ground-floor, the room which in the 20th c. was tncluded in the
estate no 16 (today called — out of accord with the tradition —
the Wierzynek House) contains the preserved decoration in the
form of stone heads (ill. 14—19). The brick wali of this room,
which is at the same time the outer wali of the entire pałace, has
been divided up on both sides by two semi-circular arcades, each
of which has been filled with two smaller arcades, supported in
the middle on the head-shaped stone consoles. The inside of the
construction shows a young man with long hair, biting his lower
lip (ill. 14, 15) and an old man with a thick growth, whose snub
nostrils and unnaturally wide mouth have a clearly animal char-
acter (ill. 16, 17). On the outside the head of an obese man with
the double chin has been preserved — his mouth is gaping in a
broad smile and the face is deeply ploughed from an excessive
gaiety (ill. 18, 19).

The seven-axes faęade, under the ridge roof, had once a very
rich decoration, whose fragments were uncovered during the ar-
chitectural works carried out in the first half of the 1980s. Be-
tween the first and second floor Windows the traces have re-
mained of the hammered off stone consoles, inserted deep into
the wali. They were placed in the wali in the course of the con-
struction of the house and carefully walled in, with shallow in-
dentations in the face of the faęade left on the first floor. This is
an unequivocal proof that the stone decoration came into being
concurrently with the walls and that the consoles in the lower
row supported relatively large sculptures. The second floor con-
soles most probably borę pinnacles or other elements of architec-
tural decoration. Above them ran a row of gables with stone
edges, adorned with plastically rendered leaves, sculpted in open
work (ill. 20).

The reliefs in the ground-floor rooms of the Cracovian pał-
ace are characterized by a high precision in the rendering of de-
tail. This refers also to the helmets, which together with the crests,
were elaborated faithfully and meticulously, and which have their
counterparts in the stone sculpture of the German Reich, beginn-
ing from the 1330s. The manner of sculpting, the treatment of
faces and to a certain degree also the character of the attire (the
head of a woman in a kind of bonnet - Germ. Kruseler), link the

Cracovian decorations to the works of the Princes’ Workshop,
active at St. Stephen’s church in Vienna in the 1360s (ill. 21—
23). Though the sculptures of the second storey display a słightly
different style, their workshop connection with the decoration of
the ground-floor rooms seems highly probable. In what con-
cerns the keystones, we deal with the representations in the he-
raldic convention, with the faces submitted to an elegant
“courtly” stylisation. The consoles manifest a fantasy and freedom
in shaping not particularly beautiful countenances, their stylisa-
tion being typical of the sculptured drolleries. In my opinion, the
differences between these sets can be explained by the change of
the stylistic modę.

The scholars who analysed the Cracovian set of coats of arms
emphasized, as a rule, the exceptionality of the heraldic presen-
tation applied in them. The representation of the helmet with the
crest instead of a heraldic shield is of essential consequence for the
composition of the discussed keystones. In addition, the crests of
the coats of arms of the Sandomierz and Kujawy Districts have
been placed on the so-called screens (Germ. Schirmbrett), which
in the West-European heraldry pass for an element that distin-
guishes tautological crests. Such features cannot be analysed as
the stylistic properties sensu stricto\ the choice of such a means of
expression was rather a derivative of the high awareness and
heraldic erudition possessed by the author of the entire decora-
tive programme. The similarity between the discussed set of key-
stones and the decoration of the largest churches founded by
Casimir the Great is obvious, pointing to the connection of this
room with the political ideology of the last Piast ruler — it had
the function comparable with that played by some of Casimirs
churches. Even the choice of the coats of arms is similar: in the
majority of the royal foundations the emblems of Great Poland
the Cracow, Dobrzyń and Ruthenian Districts were high-
lighted. In Cracow the author distinguished especially the White
Eagle (the coat of arms of the Kingdom and of the Cracow Dis-
trict), as well as the crest of the Dobrzyń District, which was one
of Casimirs major territorial captures. In the centre of the South-
ern bay appears the crest of the Ruthenian District, the king’s
successive trophy. It was of special significance in the ruleńs
policy, at least in consideration of Ruthenia’s royal tradition.
Casimir, while taking over Lion’s emblem after the Halicz-
Vladimir Princes, dignified it through the addition of the crown.
Zenon Piech hypothetically linked the presence of this insignium
to the title rarely applied by the ruler: Rex Poloniae et Russiae.
The northern bay included the emblem of the districts that built
the KingdonTs core.

The most serious interpretative difficulties are caused by the
crest in the shape of an eagle’s wing. According to Piech, it re-
fers to the Kujawy linę of the Piasts — in such a way it could have
emphasized the origin of Elżbieta Łokietkówna, the founder of
the sculptures. In my view, however, the reference of the sign to
Casimir the Great seems morę likely. This would constitute a
hapax legomenon, as in the king’s heraldry we can observe a de-
parture from particularities: on his stamps we do not find the
Kujawy coat of arms, which very consistently returned in the
sphragistics of Elżbieta Łokietkówna and Hedwig the Angevin.
We can wonder why Casimir did not decide to apply here his
monogram, otherwise in quite common use. The crest in the form
of an eagle’s wing was briefly applied by Ladislas Łokietek
(Ladislas the Short), thus making this sign prominent in Casimir
the Great’s times could have been a conscious retrospection or
even archaisation.

The image of the female head wearing a bonnet has been