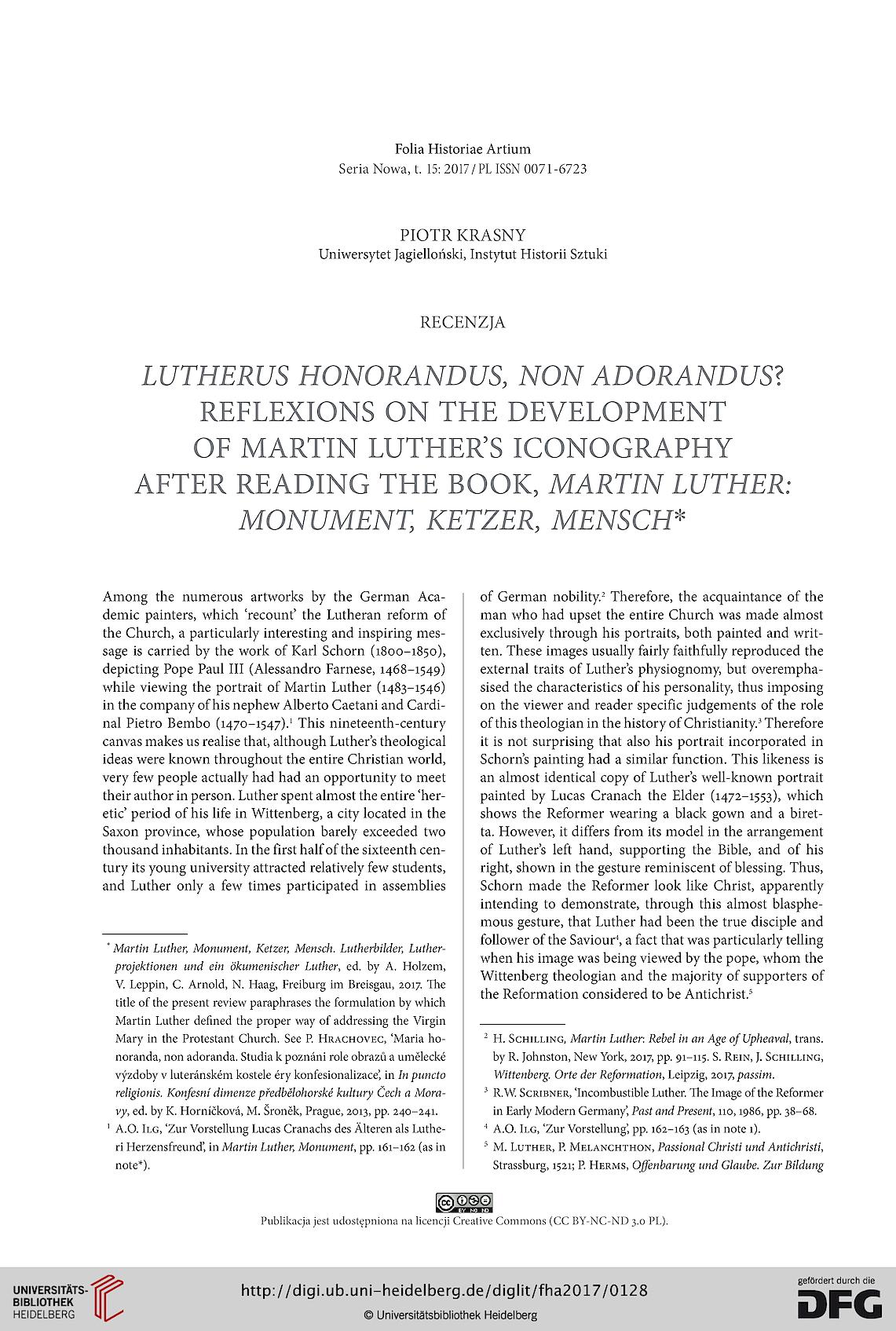 Among the numerous artworks by the German Aca-
demic painters, which ‘recount’ the Lutheran reform of
the Church, a particularly interesting and inspiring mes-
sage is carried by the work of Karl Schorn (1800-1850),
depicting Pope Paul III (Alessandro Farnese, 1468-1549)
while viewing the portrait of Martin Luther (1483-1546)
in the company of his nephew Alberto Caetani and Cardi-
nal Pietro Bembo (1470-1547).1 This nineteenth-century
canvas makes us realise that, although Luther’s theological
ideas were known throughout the entire Christian world,
very few people actually had had an opportunity to meet
their author in person. Luther spent almost the entire ‘her-
etic’ period of his life in Wittenberg, a city located in the
Saxon province, whose population barely exceeded two
thousand inhabitants. In the first half of the sixteenth cen-
tury its young university attracted relatively few students,
and Luther only a few times participated in assemblies

of German nobility.2 Therefore, the acquaintance of the
man who had upset the entire Church was made almost
exclusively through his portraits, both painted and writ-
ten. These images usually fairly faithfully reproduced the
external traits of Luther’s physiognomy, but overempha-
sised the characteristics of his personality, thus imposing
on the viewer and reader specific judgements of the role
of this theologian in the history of Christianity.3 Therefore
it is not surprising that also his portrait incorporated in
Schorns painting had a similar function. This likeness is
an almost identical copy of Luther’s well-known portrait
painted by Lucas Cranach the Elder (1472-1553), which
shows the Reformer wearing a black gown and a biret-
ta. However, it differs from its model in the arrangement
of Luther’s left hand, supporting the Bible, and of his
right, shown in the gesture reminiscent of blessing. Thus,
Schorn made the Reformer look like Christ, apparently
intending to demonstrate, through this almost blasphe-
mous gesture, that Luther had been the true disciple and
follower of the Saviour4, a fact that was particularly telling
when his image was being viewed by the pope, whom the
Wittenberg theologian and the majority of supporters of
the Reformation considered to be Antichrist.5