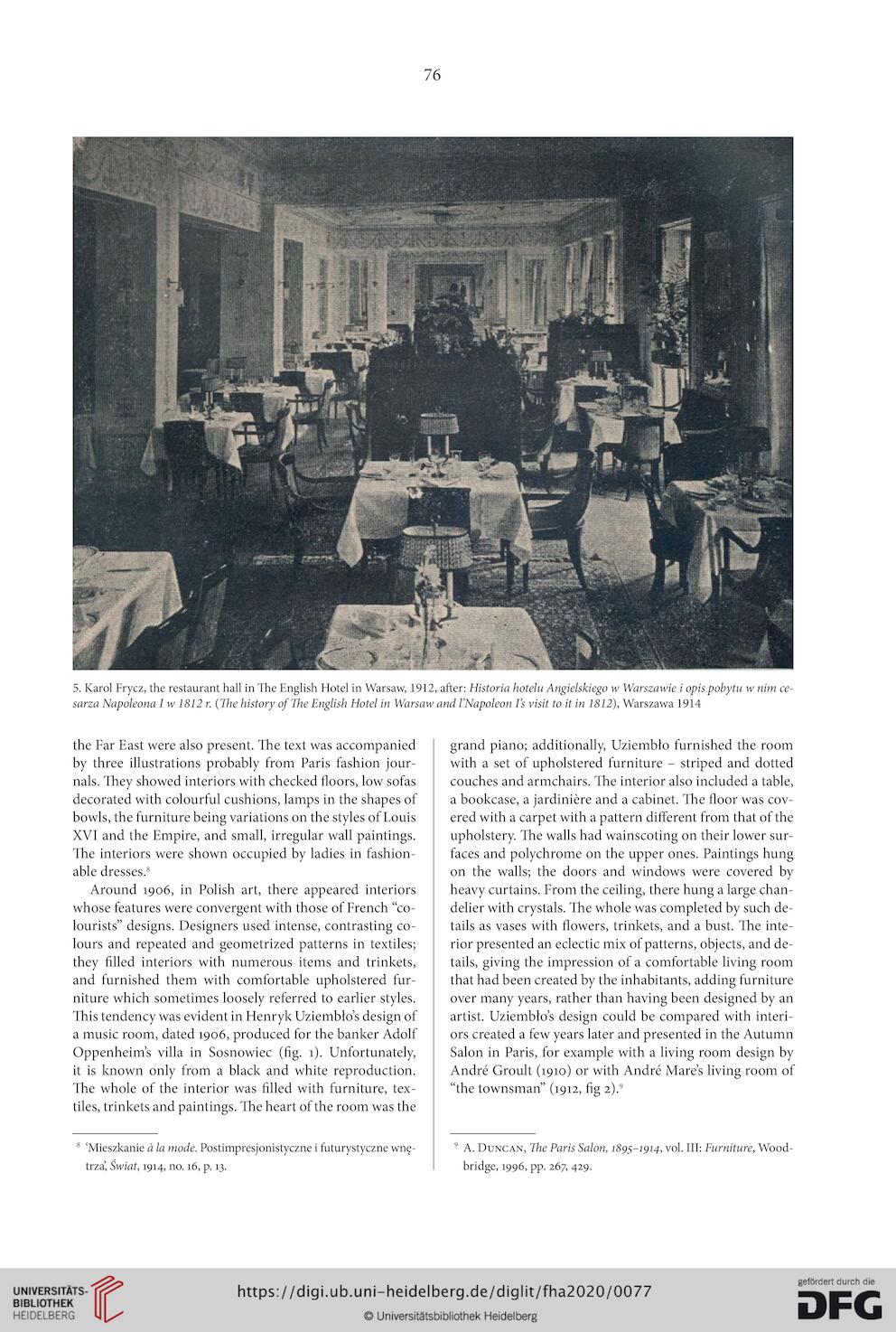 the Far East were also present. The text was accompanied
by three illustrations probably from Paris fashion jour-
nals. They showed interiors with checked floors, low sofas
decorated with colourful cushions, lamps in the shapes of
bowls, the furniture being variations on the styles of Eouis
XVI and the Empire, and small, irregular wall paintings.
The interiors were shown occupied by ladies in fashion-
able dresses.8
Around 1906, in Polish art, there appeared interiors
whose features were convergent with those of French “co-
lourists” designs. Designers used intense, contrasting co-
lours and repeated and geometrized patterns in textiles;
they filled interiors with numerous items and trinkets,
and furnished them with comfortable upholstered fur-
niture which sometimes loosely referred to earlier styles.
This tendency was evident in Henryk Uziemblo’s design of
a music room, dated 1906, produced for the banker Adolf
Oppenheims villa in Sosnowiec (fig. 1). Unfortunately,
it is known only from a black and white reproduction.
The whole of the interior was filled with furniture, tex-
tiles, trinkets and paintings. The heart of the room was the

grand piano; additionally, Uziemblo furnished the room
with a set of upholstered furniture - striped and dotted
couches and armchairs. The interior also included a table,
a bookcase, a jardinière and a cabinet. The floor was cov-
ered with a carpet with a pattern different from that of the
upholstery. The walls had wainscoting on their lower sur-
faces and polychrome on the upper ones. Paintings hung
on the walls; the doors and windows were covered by
heavy curtains. From the ceiling, there hung a large chan-
delier with crystals. The whole was completed by such de-
tails as vases with flowers, trinkets, and a bust. The inte-
rior presented an eclectic mix of patterns, objects, and de-
tails, giving the impression of a comfortable living room
that had been created by the inhabitants, adding furniture
over many years, rather than having been designed by an
artist. Uziemblo’s design could be compared with interi-
ors created a few years later and presented in the Autumn
Salon in Paris, for example with a living room design by
André Groult (1910) or with André Mares living room of
“the townsman” (1912, fig 2).9