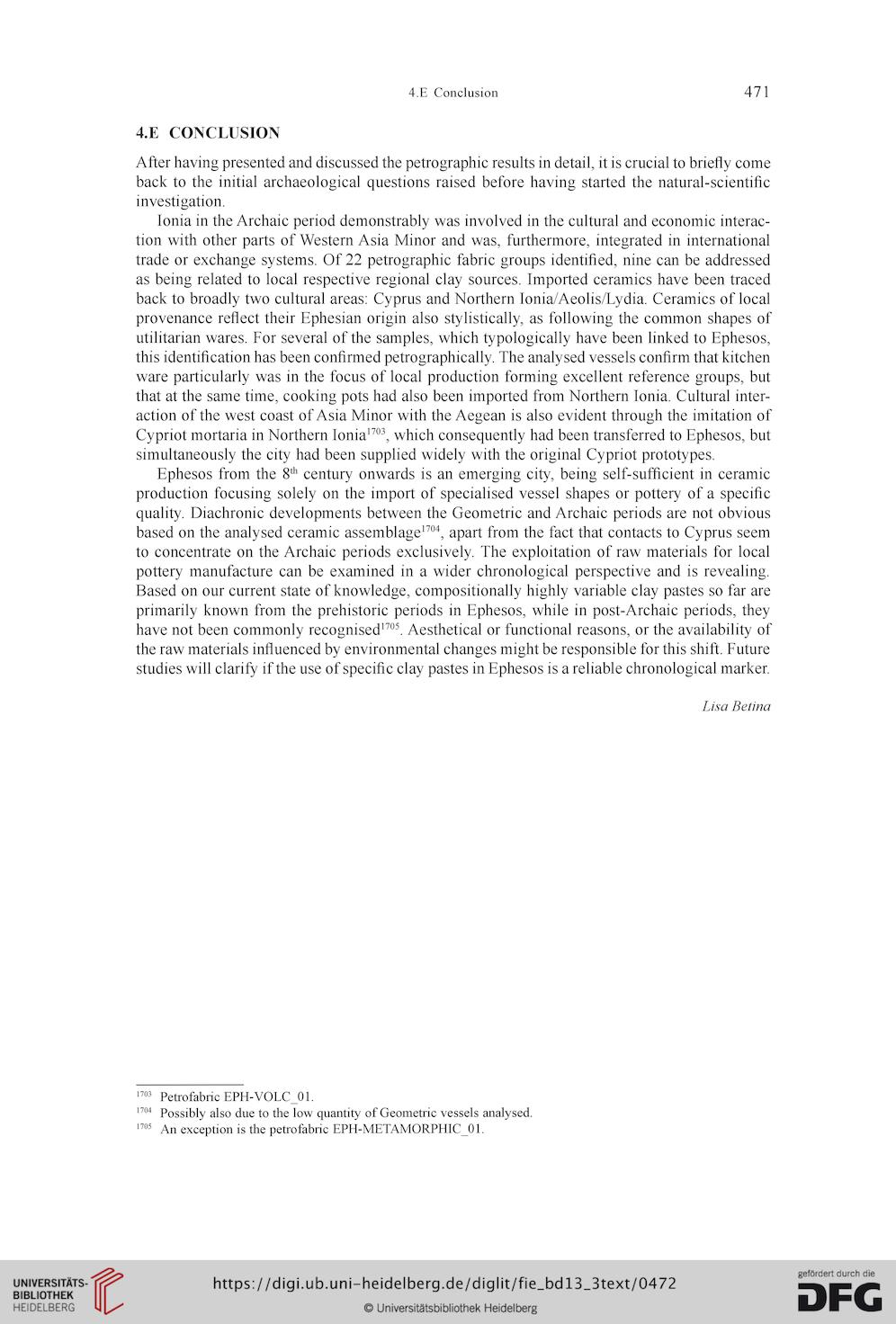 4.E CONCLUSION
After having presented and discussed the petrographic results in detail, it is crucial to briefly come
back to the initial archaeological questions raised before having started the natural-scientific
investigation.
Ionia in the Archaic period demonstrably was involved in the cultural and economic interac-
tion with other parts of Western Asia Minor and was, furthermore, integrated in international
trade or exchange Systems. Of 22 petrographic fabric groups identified, nine can be addressed
as being related to local respective regional clay sources. Imported ceramics have been traced
back to broadly two cultural areas: Cyprus and Northern lonia/Aeolis/Lydia. Ceramics of local
provenance reflect their Ephesian origin also stylistically, as following the common shapes of
utilitarian wares. For several of the samples, which typologically have been linked to Ephesos,
this identification has been confirmed petrographically. The analysed vessels confirm that kitchen
wäre particularly was in the focus of local production forming excellent reference groups, but
that at the same time, cooking pots had also been imported from Northern Ionia. Cultural inter-
action of the west coast of Asia Minor with the Aegean is also evident through the Imitation of
Cypriot mortaria in Northern Ionia1703, which consequently had been transferred to Ephesos, but
simultaneously the city had been supplied widely with the original Cypriot prototypes.
Ephesos from the 8th Century onwards is an emerging city, being self-sufficient in ceramic
production focusing solely on the Import of specialised vessel shapes or pottery of a specific
quality. Diachronie developments between the Geometrie and Archaic periods are not obvious
based on the analysed ceramic assemblage1704, apart from the fact that contacts to Cyprus seem
to concentrate on the Archaic periods exclusively. The exploitation of raw materials for local
pottery manufacture can be examined in a wider chronological perspective and is revealing.
Based on our current state of knowledge, compositionally highly variable clay pastes so far are
primarily known from the prehistoric periods in Ephesos, while in post-Archaic periods, they
have not been commonly recognised1705. Aesthetical or functional reasons, or the availability of
the raw materials influenced by environmental changes might be responsible for this shift. Future
studies will clarify if the use of specific clay pastes in Ephesos is a reliable chronological marker.
Lisa Betina

1703 Petrofabric EPH-VOLC 01.
1704 Possibly also due to the low quantity of Geometrie vessels analysed.
1705 An exception is the petrofabric EPH-METAMORPHIC Ol.