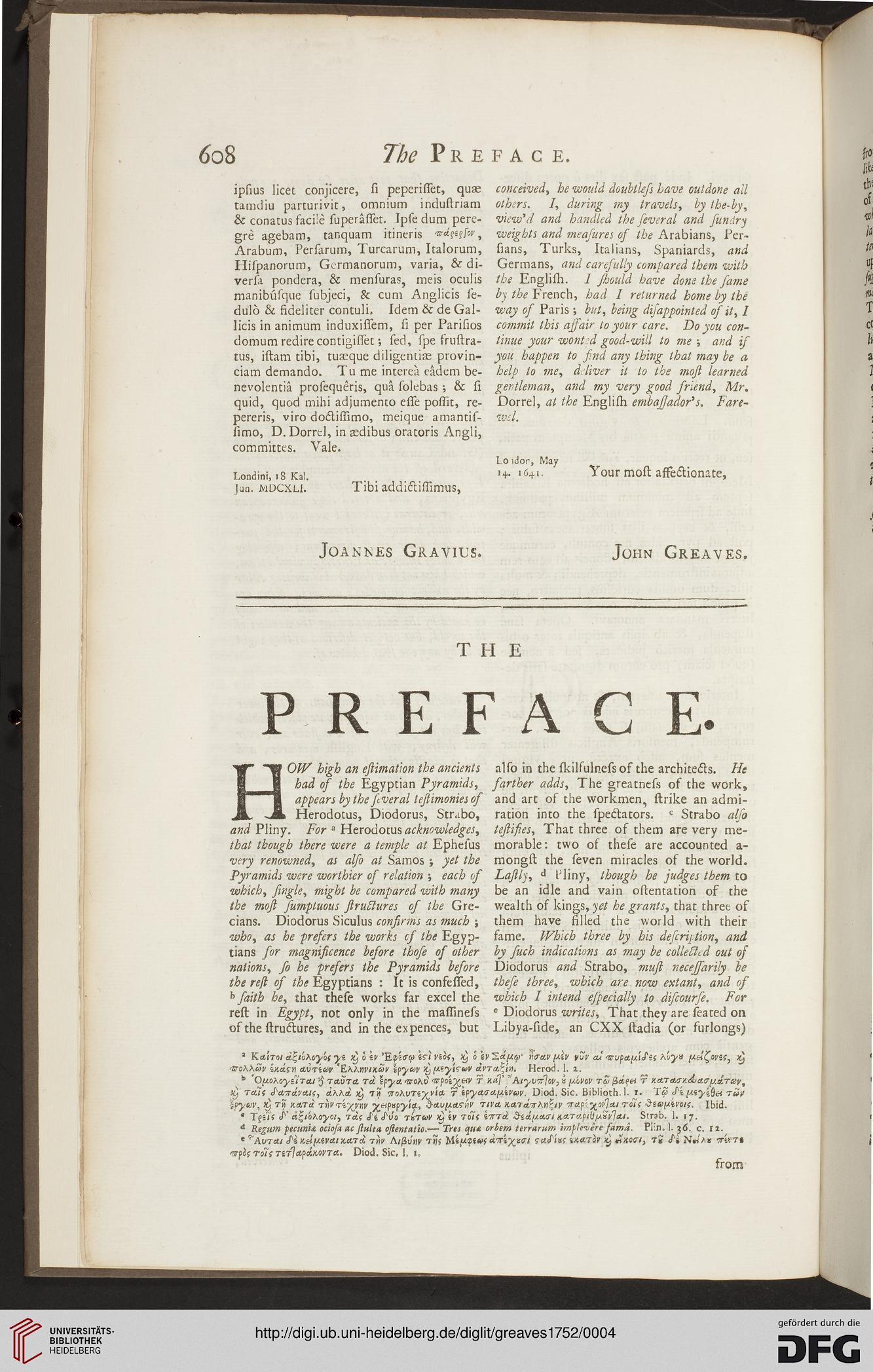 conceived, he would doubtless have outdone all
others. I, during my travels, by the-by,
view'd and handled the feveral and fundry
weights and measures of the Arabians, Per-
sians, Turks, Italians, Spaniards, and
Germans, and carefully compared them with
the English. 1 fhould have done the fame
by the French, had I returned home by the
way of Paris ; but, being disappointed of it, I
commit this affair to your care. Do you con-
tinue your wonted good-will to me -, and is
you happen to fnd any thing that may be a
help to me, deliver it to the moft learned
gentleman, and my very good friend, Mr.
Dorrel, at the English embajfador's. Fare-


OW high an esiimation the ancients
had of the Egyptian Pyramids,
appears by the fever al ieflimonies of
Herodotus, Diodorus, Strabo,
and Pliny. For a Herodotus acknowledges,
that though there were a temple at Ephesus
very renowned, as also at Sainos ; yet the
Pyramids were worthier of relation -, each of
which, fingle, might be compared with many
the moft fumptuous ftrutlures of the Gre-
cians. Diodorus Siculus consirms as much j
who, as he prefers the works cs the Egyp-
tians for magnisicence before thofe of other
nations, fo he presers the Pyramids before
the resi os the Egyptians : It is confessed,
h faith he, that these works far excel the
rest in Egypt, not only in the massiness
of the structures, and in the expences, but

also in the skilfulness of the architects. He
farther adds, The greatness of the work,
and art of the workmen, strike an admi-
ration into the spectators. c Strabo alfo
teflifies, That three of them are very me-
morable: two of these are accounted a-
mongst the seven miracles of the world.
Laslly, d Pliny, though he judges them to
be an idle and vain orientation of the
wealth of kings, yet he grants, that three os
them have rilled the world with their
fame. Which three by his definition, and
by fuch indications as may be collected out of
Diodorus and Strabo, muft necejfarily be
thefe three, which are now extant, and of
which I intend efpecially to difcourfe. For
e Diodorus writes, That they are seated on
Libya-side, an CXX stadia (or furlongs)