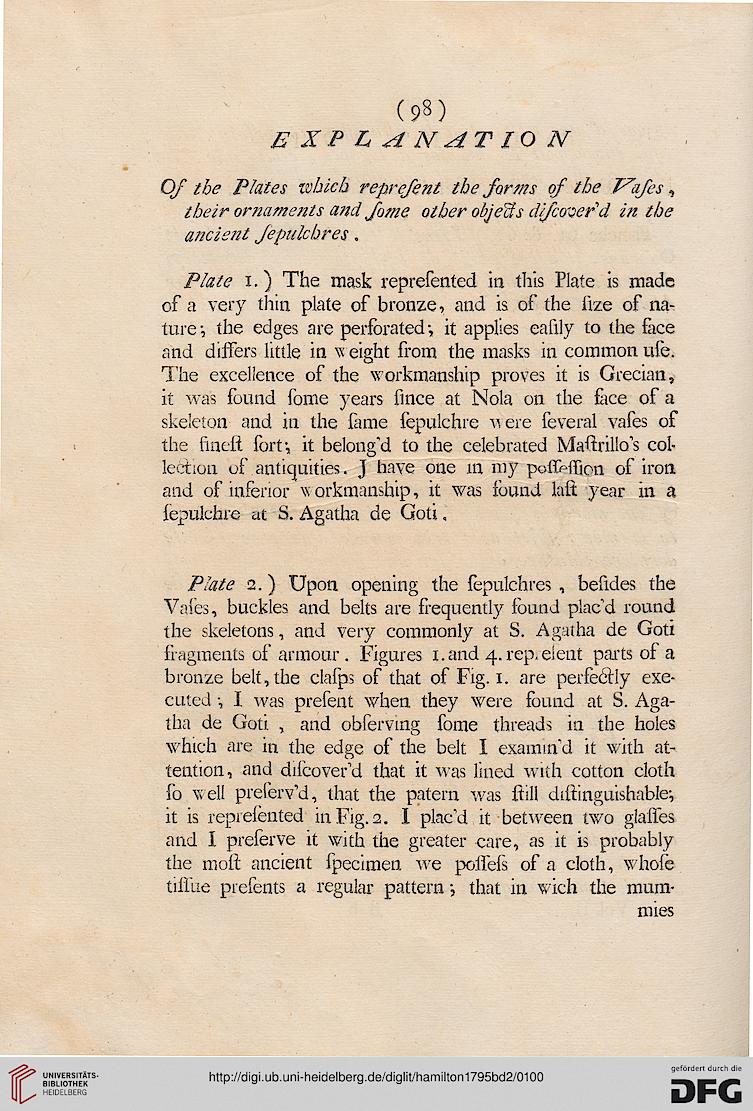 Information about OCR text
(9§)
E XP £ <d N <dT 10 N
Of the Plates which reprefent the forms of the P^afes,
their ornaments and fame other objesss di/CQver'd in the
ancient Jepulchres,
Plate i.) The mask represented in this Plate is made
of a very thin plate of bronze , and is of the size of na-
ture*, the edges are perforated-, it applies easily to the face
and diifers little in weight srom the masks in common use.
The excellence of the workmanship proves it is Grecian,
it was found some years smce at Nola on the face of a
skeleton and in the same sepulchre were several vases of
the finest sort-, it belonged to the celebrated Mastrillo's col
lection of antiquities. J have one in my potfcssion of iron
and of inferior workmanship, it was found last year in a
fepulchre at 8. Agatha de Goti,
Plate 2.) Upon opening the sepulchres , besides the
Vales, buckles and belts are frequently found plac d round
the skeletons, and very commonly at S. Agatha de Goti
fragments of armour. Figures i.and 4«rep.elent parts of a
bronze belt, the clasps of that of Fig. i. are perfectly exe-
cuted *, I was present when they were found at S. Aga-
tha de Goti , and obfervmg some threads in the holes
which are in the edge of the belt I exam in d it with at-
tention, and dilcover'd that it was lined with cotton cloth
so w ell prefer v'd, that the patera was still distinguishable-,
it is reprefented in Fig. 2. I plac cl it between two glasfes
and 1 preserve it with the greater care, as it is probably
the molt ancient specimen we possess of a cloth, whose
tillue prefents a regular pattern that in w ich the mum-
mies