Hamilton, William John
Researches in Asia Minor, Pontus, and Armenia: with some account of their antiquities and geology ; in two volumes (Band 1) — London, 1842 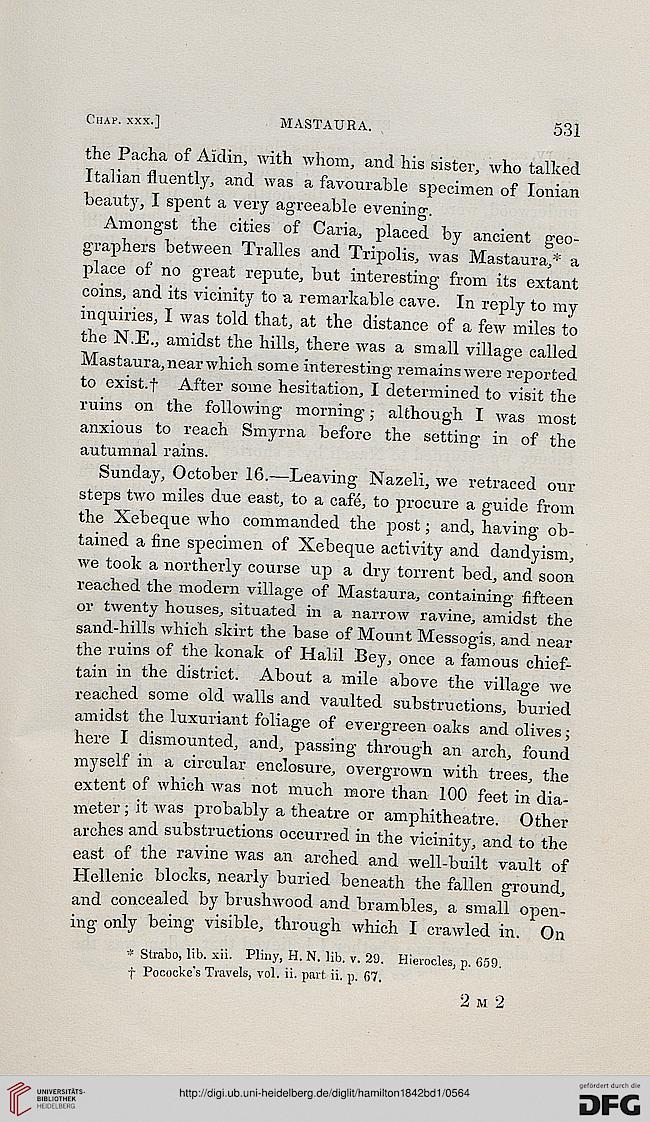 the Pacha of Aiclin, with whom, and his sister, who talked
Italian fluently, and was a favourable specimen of Ionian
beauty, I spent a very agreeable evening.

Amongst the cities of Caria, placed by ancient geo-
graphers between Tralles and Tripolis, was Mastaura,* a
place of no great repute, but interesting from its extant
coins, and its vicinity to a remarkable cave. In reply to my
inquiries, I was told that, at the distance of a few miles to
the N.E., amidst the hills, there was a small village called
Mastaura, near which some interesting remains were reported
to exist.f After some hesitation, I determined to visit the
ruins on the following morning; although I was most
anxious to reach Smyrna before the setting in of the
autumnal rains.

Sunday, October 16.—Leaving Nazeli, we retraced our
steps two miles due east, to a cafe, to procure a guide from
the Xebeque who commanded the post; and, having ob-
tained a fine specimen of Xebeque activity and dandyism,
we took a northerly course up a dry torrent bed, and soon
reached the modern village of Mastaura, containing fifteen
or twenty houses, situated in a narrow ravine, amidst the
sand-hills which skirt the base of Mount Messogis, and near
the ruins of the konak of Halil Bey, once a famous chief-
tain in the district. About a mile above the village we
reached some old walls and vaulted substructions, buried
amidst the luxuriant foliage of evergreen oaks and olives;
here I dismounted, and, passing through an arch, found
myself in a circular enclosure, overgrown with trees, the
extent of which was not much more than 100 feet in dia-
meter ; it was probably a theatre or amphitheatre. Other
arches and substructions occurred in the vicinity, and to the
east of the ravine was an arched and well-built vault of
Hellenic blocks, nearly buried beneath the fallen ground,
and concealed by brushwood and brambles, a small open-
ing only being visible, through which I crawled in. On