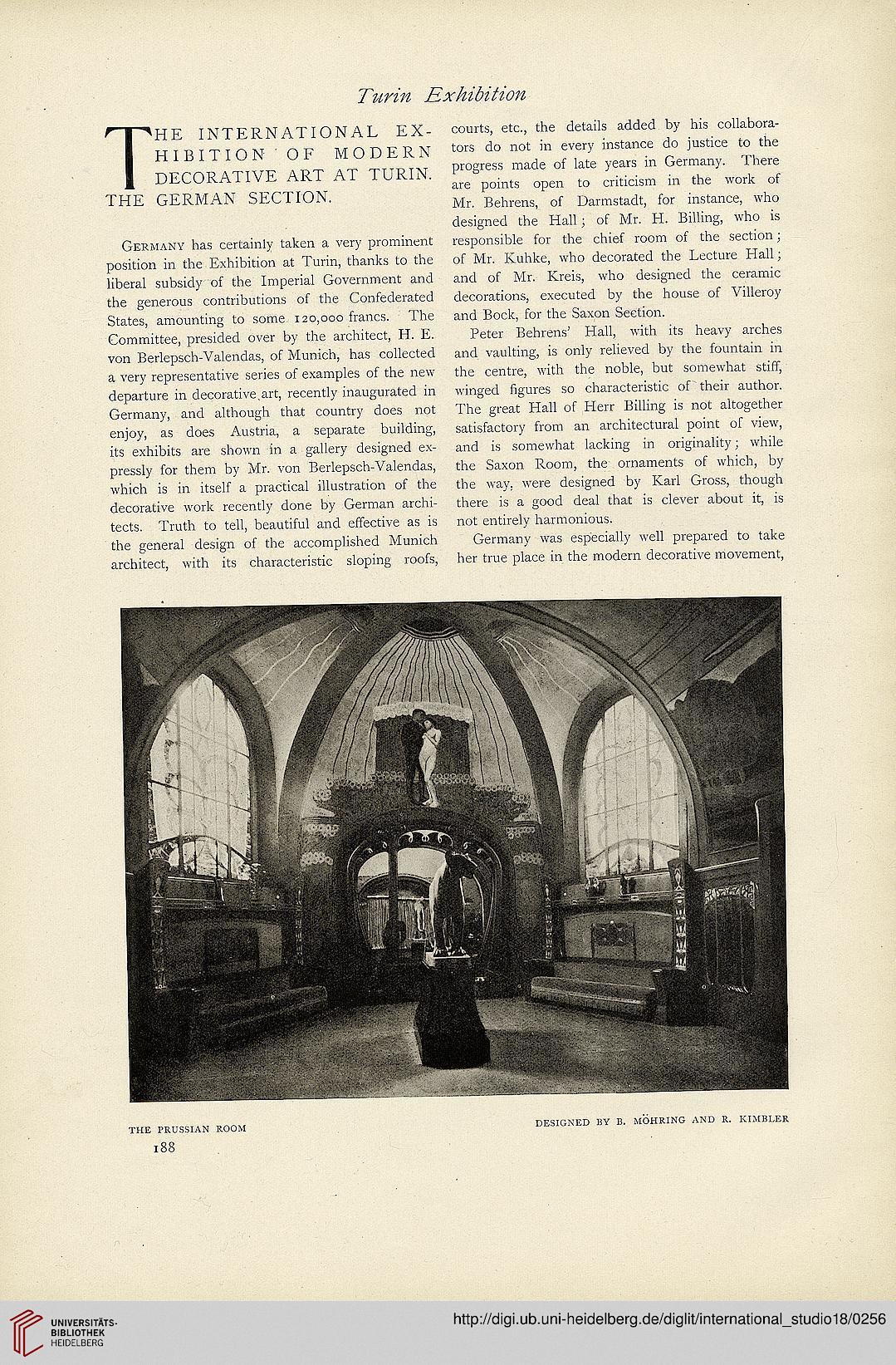 ^T^HE INTERNATIONAL EX-
] HIBITION OF MODERN
§ DECORATIVE ART AT TURIN.
THE GERMAN SECTION.
GERMANY has certainiy taken a very prominent
position in the Exhibition at Turin, thanks to the
liberal subsidy of the Imperial Government and
the generous contributions of the Confederated
States, amounting to some 120,000 francs. The
Committee, presided over by the architect, H. E.
von Beriepsch-Valendas, of Munich, has cohected
a very representative series of exampies of the new
departure in decorative art, recently inaugurated in
Germany, and although that country does not
enjoy, as does Austria, a separate buiiding,
its exhibits are shown in a gailery designed ex-
pressiy for them by Mr. von Berlepsch-Vaiendas,
which is in itself a practicai iilustration of the
decorative work recently done by German archi-
tects. Truth to teii, beautifui and effective as is
the generai design of the accompiished Munich
architect, with its characteristic sioping roofs,

courts, etc., the detaiis added by his coliabora-
tors do not in every instance do justice to the
progress made of late years in Germany. There
are points open to criticism in the work of
Mr. Behrens, of Darmstadt, for instance, who
designed the Hall; of Mr. H. Billing, who is
responsible for the chief room of the section;
of Mr. Kuhke, who decorated the Lecture Hall;
and of Mr. Kreis, who designed the ceramic
decorations, executed by the house of Villeroy
and Bock, for the Saxon Section.
Peter Behrens' Hall, with its heavy arches
and vaulting, is only relieved by the fountain in
the centre, with the noble, but somewhat stiff,
winged hgures so characteristic of their author.
The great Hall of Herr Billing is not altogether
satisfactory from an architectural point of view,
and is somewhat lacking in originality; while
the Saxon Room, the ornaments of which, by
the way, were designed by Karl Gross, though
there is a good deal that is clever about it, is
not entirely harmonious.
Germany was especially well prepared to take
her true place in the modern decorative movement,

DESIGNED BY B. MOHRING AND R. KIMBLER