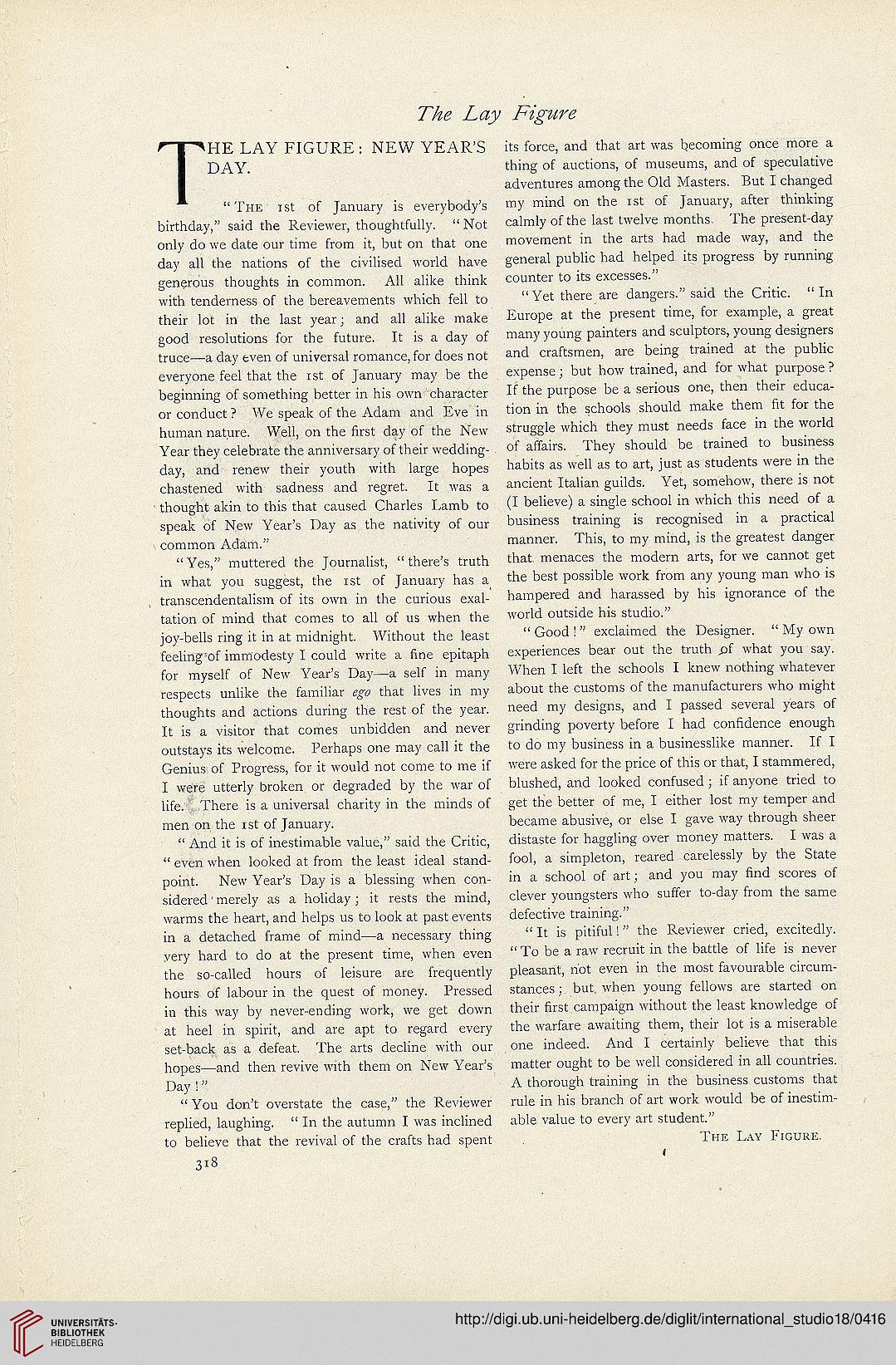 ^r^HE LAY FIGURE: NEW YEAR'S
] DAY.
"TnE ist of January is everybody's
birthday," said the Reviewer, thoughtfuHy. " Not
only do we date our time from it, but on that one
day ali the nations of the civiiised worid have
generous thoughts in common. Ali aiike think
with tenderness of the bereavements which feii to
their iot in the iast year; and aii alike make
good resolutions for the future. It is a day of
truce—a day even of universal romance, for does not
everyone feel that the ist of January may be the
beginning of something better in his own character
or conduct ? We speak of the Adam and Eve in
human nature. Weil, on the hrst day of the New
Year they celebrate the anniversary of their wedding-
day, and renew their youth with iarge hopes
chastened with sadness and regret. It was a
thought akin to this that caused Charies Lamb to
speak of New Year's Day as the nativity of our
comrnon Adam."
"Yes," muttered the Journaiist, "there's truth
in what you suggest, the ist of January has a
transcendentaiism of its own in the curious exai-
tation of mind that comes to ali of us when the
joy-beiis ring it in at midnight. Without the least
feeling of immodesty I couid write a hne epitaph
for myseif of New Year's Day—a seif in many
respects uniike the famiiiar that iives in my
thoughts and actions during the rest of the year.
It is a visitor that comes unbidden and never
outstays its weicome. Perhaps one may caii it the
Genius of Progress, for it would not come to me if
I were utterly broken or degraded by the war of
life. There is a universal charity in the minds of
men on the ist of January.
" And it is of inestimable value," said the Critic,
"evenwhen iookedatfrom theieast ideal stand-
point. New Year's Day is a biessing when con-
sidered merely as a holiday ; it rests the mind,
warms the heart, and heips us to look at past events
in a detached frame of mind—a necessary thing
very hard to do at the present time, when even
the so-caiied hours of ieisure are frequently
hours of labour in the quest of money. Pressed
in this way by never-ending work, we get down
at heei in spirit, and are apt to regard every
set-back as a defeat. The arts deciine with our
hopes—and then revive with them on New Year's
Day !"
"Youdon'toverstatethecase,"t:heR.eviewer
repiied, iaughing. " In the autumn I was inciined
to believe that the revival of the crafts had spent
3i3

its force, and that art was becoming once more a
thing of auctions, of museums, and of speculative
adventures among the Old Masters. But I changed
my mind on the ist of January, after thinking
caimiy of the iast tweive months. The present-day
movement in the arts had made way, and the
generai pubiic had heiped its progress by running
counter to its excesses."
"Yet there are dangers." said the Critic. "In
Europe at the present time, for exampie, a great
many young painters and scuiptors, young designers
and craftsmen, are being trained at the public
expense ; but how trained, and for what purpose ?
If the purpose be a serious one, then their educa-
tion in the schools should make them fit for the
struggie which they must needs face in the worid
of affairs. They should be trained to business
habits as weil as to art, just as students were in the
ancient Italian guiids. Yet, somehow, there is not
(I believe) a single school in which this need of a
business training is recognised in a practical
manner. This, to my mind, is the greatest danger
that. menaces the modern arts, for we cannot get
the best possible work frorn any young man who is
hampered and harassed by his ignorance of the
world outside his studio."
" Good ! " exclaimed the Designer. " My own
experiences bear out the truth ,pf what you say.
When I left the schools I knew nothing whatever
about the customs of the manufacturers who might
need my designs, and I passed several years of
grinding poverty before I had conhdence enough
to do my business in a businesslike manner. If I
were asked for the price of this or that, I stammered,
blushed, and looked confused; if anyone tried to
get the better of me, I either lost my temper and
became abusive, or else I gave way through sheer
distaste for haggling over money matters. I was a
fool, a simpleton, reared carelessly by the State
in a school of art; and you may hnd scores of
clever youngsters who suffer to-day from the same
defective training."
" It is pitiful!" the Reviewer cried, excitedly.
" To be a raw recruit in the battle of life is never
pleasant, not even in the most favourable circum-
stances; but when young fellows are started on
their first campaign without the least knowledge of
the warfare awaiting them, their lot is a miserable
one indeed. And I certainly believe that this
matter ought to be well considered in all countries.
A thorough training in the business customs that
rule in his branch of art work would be of inestim-
able value to every art student."
THE LAY FlGURE.
<