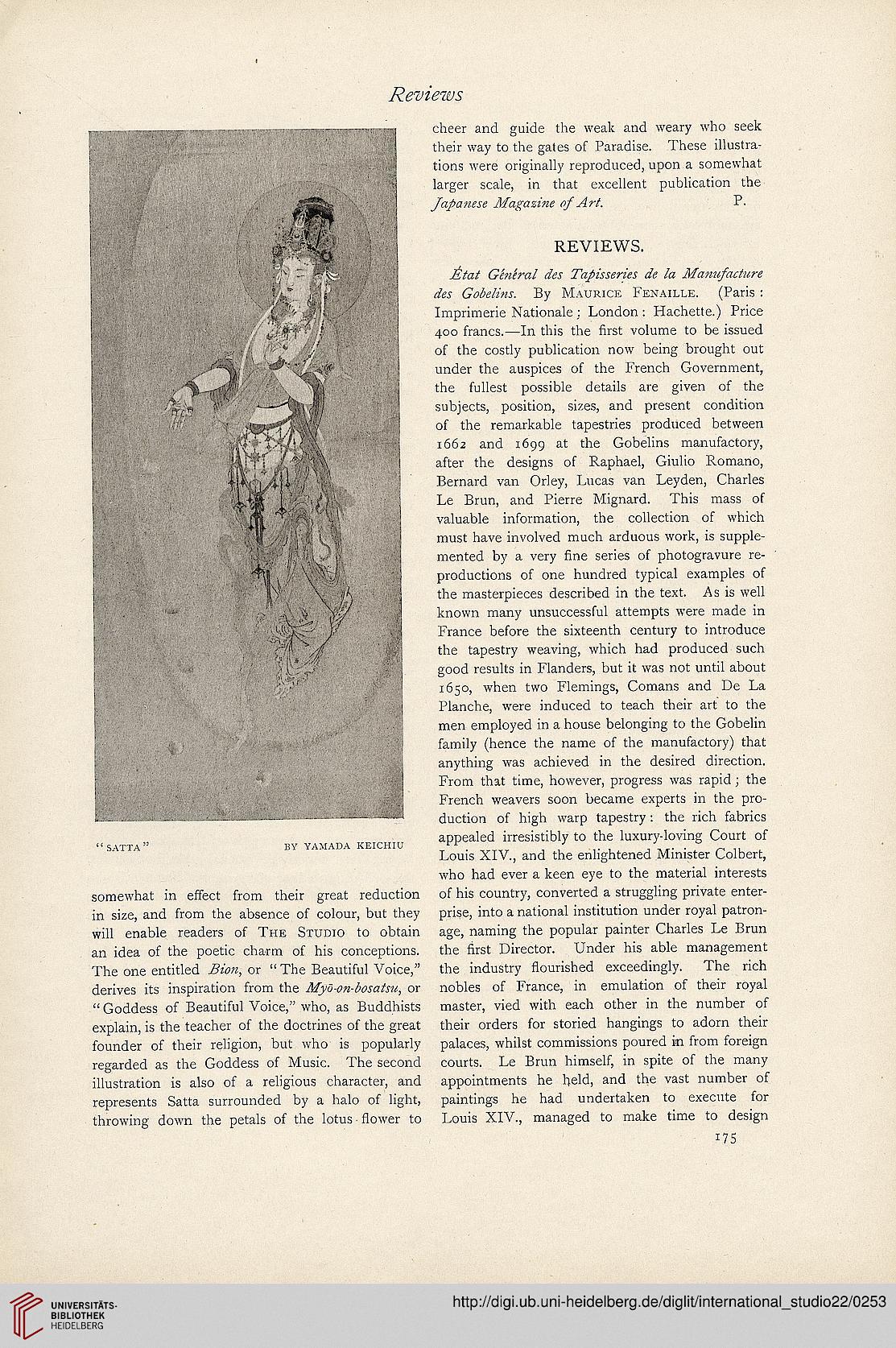 somewhat in effect from their great reduction
in size, and from the absence of colour, but they
wiil enable readers of THE STUDIO to obtain
an idea of the poetic charm of his conceptions.
The one entitled or " The Beautiful Voice,"
derives its inspiration from the or
"Goddess of Beautiful Voice," who, as Buddhists
explain, is the teacher of the doctrines of the great
founder of their religion, but who is popularly
regarded as the Goddess of Music. The second
illustration is also of a religious character, and
represents Satta surrounded by a halo of light,
throwing down the petals of the lotus ilower to

cheer and guide the weak and weary who seek
their way to the gates of Paradise. These illustra-
tions were originally reproduced, upon a somewhat
larger scale, in that excellent publication the
P.
REVIEWS.
CiAww/ /a jVawz/hYY'MTT?
By MAURICE FENAILLE. (Paris :
Imprimerie Nationale : London : Hachette.) Price
400 francs.—In this the first volume to be issued
of the costly publication now being brought out
under the auspices of the French Government,
the fullest possible details are given of the
subjects, position, sizes, and present condition
of the remarkable tapestries produced between
1662 and 1699 at the Gobelins manufactory,
after the designs of Raphael, Giulio Romano,
Bernard van Orley, Lucas van Leyden, Charles
Le Brun, and Pierre Mignard. This mass of
valuable information, the collection of which
must have involved much arduous work, is supple-
mented by a very fine series of photogravure re-
productions of one hundred typical examples of
the masterpieces described in the text. As is well
known many unsuccessful attempts were made in
France before the sixteenth century to introduce
the tapestry weaving, which had produced such
good results in Flanders, but it was not until about
1650, when two Flemings, Comans and De La
Planche, were induced to teach their art to the
men employed in a house belonging to the Gobelin
family (hence the name of the manufactory) that
anything was achieved in the desired direction.
From that time, however, progress was rapid; the
French weavers soon became experts in the pro-
duction of high warp tapestry : the rich fabrics
appealed irresistibly to the luxury-loving Court of
Louis XIV., and the enlightened Minister Colbert,
who had ever a keen eye to the material interests
of his country, converted a struggling private enter-
prise, into a national institution under royal patron-
age, naming the popular painter Charles Le Brun
the first Director. Under his able management
the industry flourished exceedingly. The rich
nobles of France, in emulation of their royal
master, vied with each other in the number of
their orders for storied hangings to adorn their
palaces, whilst commissions poured in from foreign
courts. Le Brun himself, in spite of the many
appointments he held, and the vast number of
paintings he had undertaken to execute for
Louis XIV., managed to make time to design
175