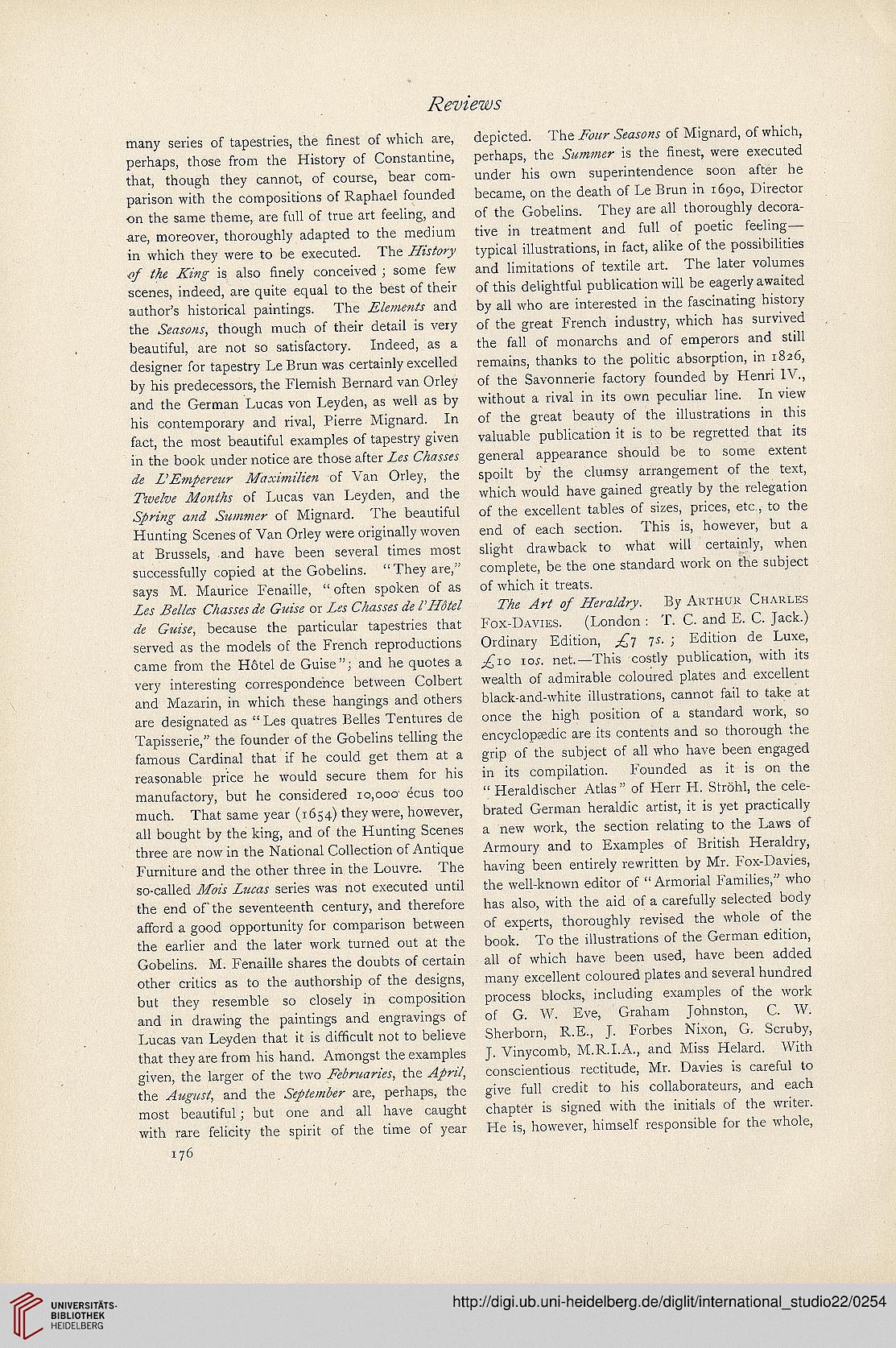 many series of tapestries, the finest of which are,
perhaps, those from the History of Constantine,
that, though they cannot, of course, bear com-
parison with the compositions of Raphael founded
on the same theme, are full of true art feeling, and
are, moreover, thoroughly adapted to the medium
in which they were to be executed. The ZfZAyrr
^ is also finely conceived ; some few
scenes, indeed, are quite equal to the best of their
author's historical paintings. The ZZ-WTzZ and
the though much of their detail is very
beautiful, are not so satisfactory. Indeed, as a
designer for tapestry Le Brun was certainly excelled
by his predecessors, the Flemish Bernard van Orley
and the German Lucas von Leyden, as well as by
his contemporary and rival, Pierre Mignard. In
fact, the most beautiful examples of tapestry given
in the book under notice are those after Z&f
<Z Z'Z77^5<?7^M7- of Van Orley, the
ZhWw ZZ7;Z/Z of Lucas van Leyden, and the
of Mignard. The beautiful
Hunting Scenes of Van Orley were originally woven
at Brussels, and have been several times most
successfully copied at the Gobelins. "They are,"
says M. Maurice Fenaille, " often spoken of as
Z^ Z?<ZZr Z<? C^Zg or Z^j CZa.MM Zs /'ZZZ/
Zs G^Zf, because the particular tapestries that
served as the models of the French reproductions
came from the Hotel de Guise"; and he quotes a
very interesting correspondence between Colbert
and Mazarin, in which these hangings and others
are designated as "Les quatres Belles Tentures de
Tapisserie," the founder of the Gobelins telling the
famous Cardinal that if he could get them at a
reasonable price he would secure them for his
manufactory, but he considered 10,000 ecus too
much. That same year (1654) they were, however,
all bought by the king, and of the Hunting Scenes
three are now in the National Collection of Antique
Furniture and the other three in the Louvre. The
so-called ZZZ Z^rw series was not executed until
the end of the seventeenth century, and therefore
afford a good opportunity for comparison between
the earlier and the later work turned out at the
Gobelins. M. Fenaille shares the doubts of certain
other critics as to the authorship of the designs,
but they resemble so closely in composition
and in drawing the paintings and engravings of
Lucas van Leyden that it is difficult not to believe
that they are from his hand. Amongst the examples
given, the larger of the two the
the and the are, perhaps, the
most beautiful; but one and all have caught
with rare felicity the spirit of the time of year
176

depicted. The Zlw?* of Mignard, of which,
perhaps, the is the finest, were executed
under his own superintendence soon after he
became, on the death of Le Brun in 1690, Director
of the Gobelins. They are all thoroughly decora-
tive in treatment and full of poetic feeling—
typical illustrations, in fact, alike of the possibilities
and limitations of textile art. The later volumes
of this delightful publication will be eagerly awaited
by all who are interested in the fascinating history
of the great French industry, which has survived
the fall of monarchs and of emperors and still
remains, thanks to the politic absorption, in 1826,
of the Savonnerie factory founded by Henri IV.,
without a rival in its own peculiar line. In view
of the great beauty of the illustrations in this
valuable publication it is to be regretted that its
general appearance should be to some extent
spoilt by the clumsy arrangement of the text,
which would have gained greatly by the relegation
of the excellent tables of sizes, prices, etc, to the
end of each section. This is, however, but a
slight drawback to what will certainly, when
complete, be the one standard work on the subject
of which it treats.
Z%g <?/* ZZyaZZy. By ARTHUR CHARLES
Fox-DAViES. (London : T. C. and E. C. Jack.)
Ordinary Edition, ^7 7^. ; Edition de Luxe,
roy. net.—This costly publication, with its
wealth of admirable coloured plates and excellent
black-and-white illustrations, cannot fail to take at
once the high position of a standard work, so
encyclopaedic are its contents and so thorough the
grip of the subject of all who have been engaged
in its compilation. Founded as it is on the
" Heraldischer Atlas " of Herr H. Strohl, the cele-
brated German heraldic artist, it is yet practically
a new work, the section relating to the Laws of
Armoury and to Examples of British Heraldry,
having been entirely rewritten by Mr. Fox-Davies,
the well-known editor of "Armorial Families," who
has also, with the aid of a carefully selected body
of experts, thoroughly revised the whole of the
book. To the illustrations of the German edition,
all of which have been used, have been added
many excellent coloured plates and several hundred
process blocks, including examples of the work
of G. W. Eve, Graham Johnston, C. W.
Sherborn, R.E., J. Forbes Nixon, G. Scruby,
J. Vinycomb, M.R.I.A., and Miss Helard. With
conscientious rectitude, Mr. Davies is careful to
give full credit to his collaborateurs, and each
chapter is signed with the initials of the writer.
He is, however, himself responsible for the whole,