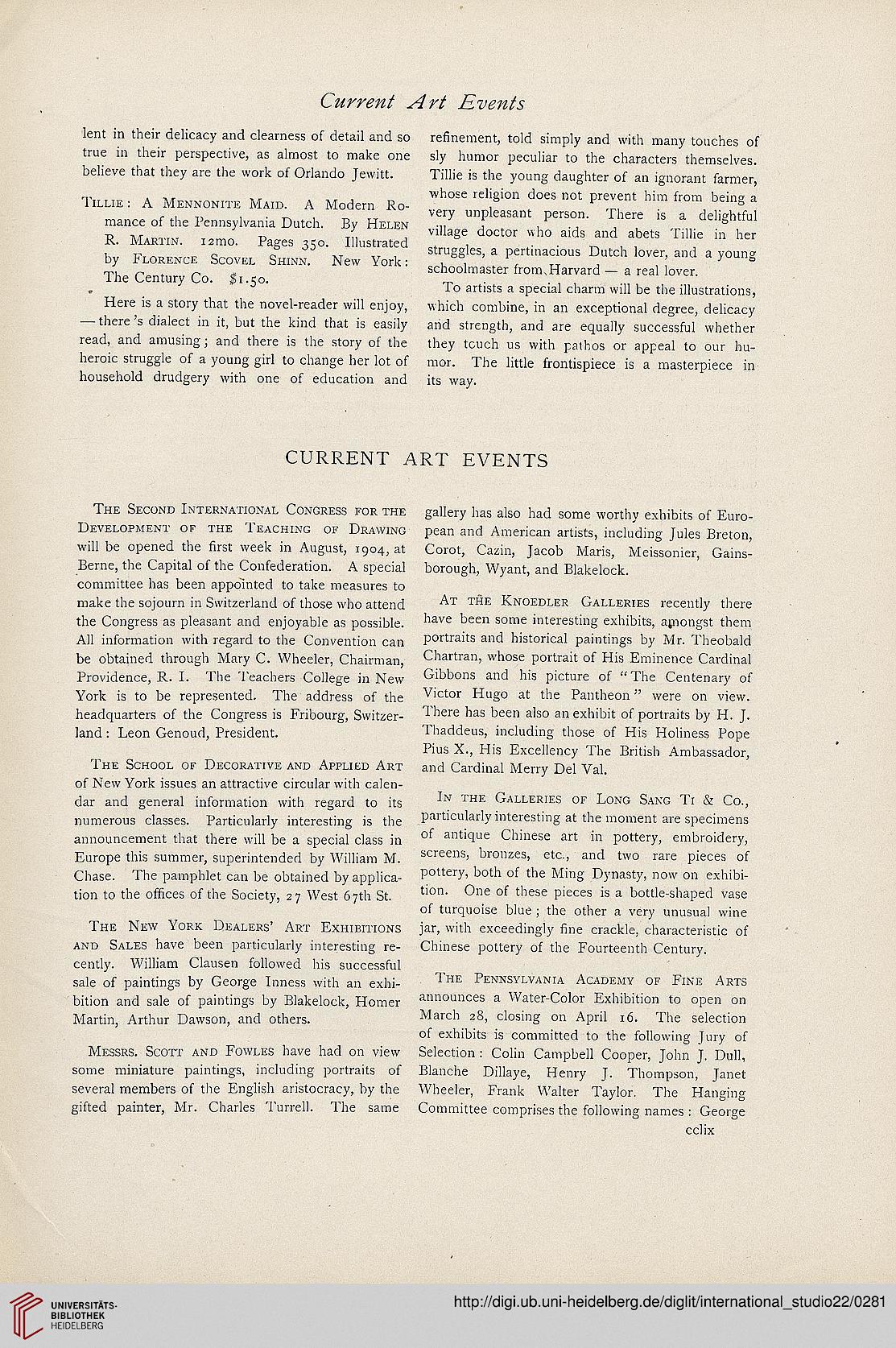 lent in their delicacy and clearness of detail and so
true in their perspective, as almost to make one
believe that they are the work of Orlando Jewitt.
TiLLiE: A MENNONtTE MAID. A Modern Ro-
mance of the Pennsylvania Dutch. By HELEN
R. MARTIN. i2mo. Pages 350. Illustrated
by FLORENCE ScovEL SHINN. New York:
The Century Co. %i.go.
Here is a story that the novel-reader will enjoy,
— there's dialect in it, but the kind that is easily
read, and amusing; and there is the story of the
heroic struggle of a young girl to change her lot of
household drudgery with one of education and

refinement, told simply and with many touches of
sly humor peculiar to the characters themselves.
Tillie is the young daughter of an ignorant farmer,
whose religion does not prevent him from being a
very unpleasant person. There is a delightful
village doctor who aids and abets Tillie in her
struggles, a pertinacious Dutch lover, and a young
schoolmaster from Harvard — a real lover.
To artists a special charm will be the illustrations,
which combine, in an exceptional degree, delicacy
and strength, and are equally successful whether
they touch us with pathos or appeal to our hu-
mor. The little frontispiece is a masterpiece in
its way.

THE SECOND INTERNATIONAL CONGRESS FOR THE
DEVELOPMENT OF THE TEACHING OF DRAWING
will be opened the first week in August, 1904, at
Berne, the Capital of the Confederation. A special
committee has been appointed to take measures to
make the sojourn in Switzerland of those who attend
the Congress as pleasant and enjoyable as possible.
All information with regard to the Convention can
be obtained through Mary C. Wheeler, Chairman,
Providence, R. 1. The Teachers College in New
York is to be represented. The address of the
headquarters of the Congress is Fribourg, Switzer-
land : Leon Genoud, President.
THE SCHOOL OF DECORATIVE AND APPLIED ART
of New York issues an attractive circular with calen-
dar and general information with regard to its
numerous classes. Particularly interesting is the
announcement that there will be a special class in
Europe this summer, superintended by William M.
Chase. The pamphlet can be obtained by applica-
tion to the offices of the Society, 27 West 67th St.
THE NEW YORK DEALERS' ART EXHIBITIONS
AND SALES have been particularly interesting re-
cently. William Clausen followed his successful
sale of paintings by George Inness with an exhi-
bition and sale of paintings by Blakelock, Homer
Martin, Arthur Dawson, and others.
MESSRS. Scon- AND FowLES have had on view
some miniature paintings, including portraits of
several members of the English aristocracy, by the
gifted painter, Mr. Charles Turrell. The same

gallery has also had some worthy exhibits of Euro-
pean and American artists, including Jules Breton,
Corot, Cazin, Jacob Maris, Meissonier, Gains-
borough, Wyant, and Blakelock.
AT THE KNOEDLER GALLERIES recently there
have been some interesting exhibits, apiongst them
portraits and historical paintings by Mr. Theobald
Chartran, whose portrait of His Eminence Cardinal
Gibbons and his picture of " The Centenary of
Victor Hugo at the Pantheon" were on view.
There has been also an exhibit of portraits by H. J.
Thaddeus, including those of His Holiness Pope
Pius X., His Excellency The British Ambassador,
and Cardinal Merry Del Val.
IN THE GALLERIES OF LONG S.ANG Tl & Co.,
particularly interesting at the moment are specimens
of antique Chinese art in pottery, embroidery,
screens, bronzes, etc., and two rare pieces of
pottery, both of the Ming Dynasty, now on exhibi-
tion. One of these pieces is a bottle-shaped vase
of turquoise blue ; the other a very unusual wine
jar, with exceedingly fine crackle, characteristic of
Chinese pottery of the Fourteenth Century.
THE PENNSYLVANIA ACADEMY OF FlNE ARTS
announces a Water-Color Exhibition to open on
March 28, closing on April 16. The selection
of exhibits is committed to the following Jury of
Selection : Colin Campbell Cooper, John J. Dull,
Blanche Dillaye, Henry J. Thompson, Janet
Wheeler, Frank Walter Taylor. The Hanging
Committee comprises the following names : George
cclix