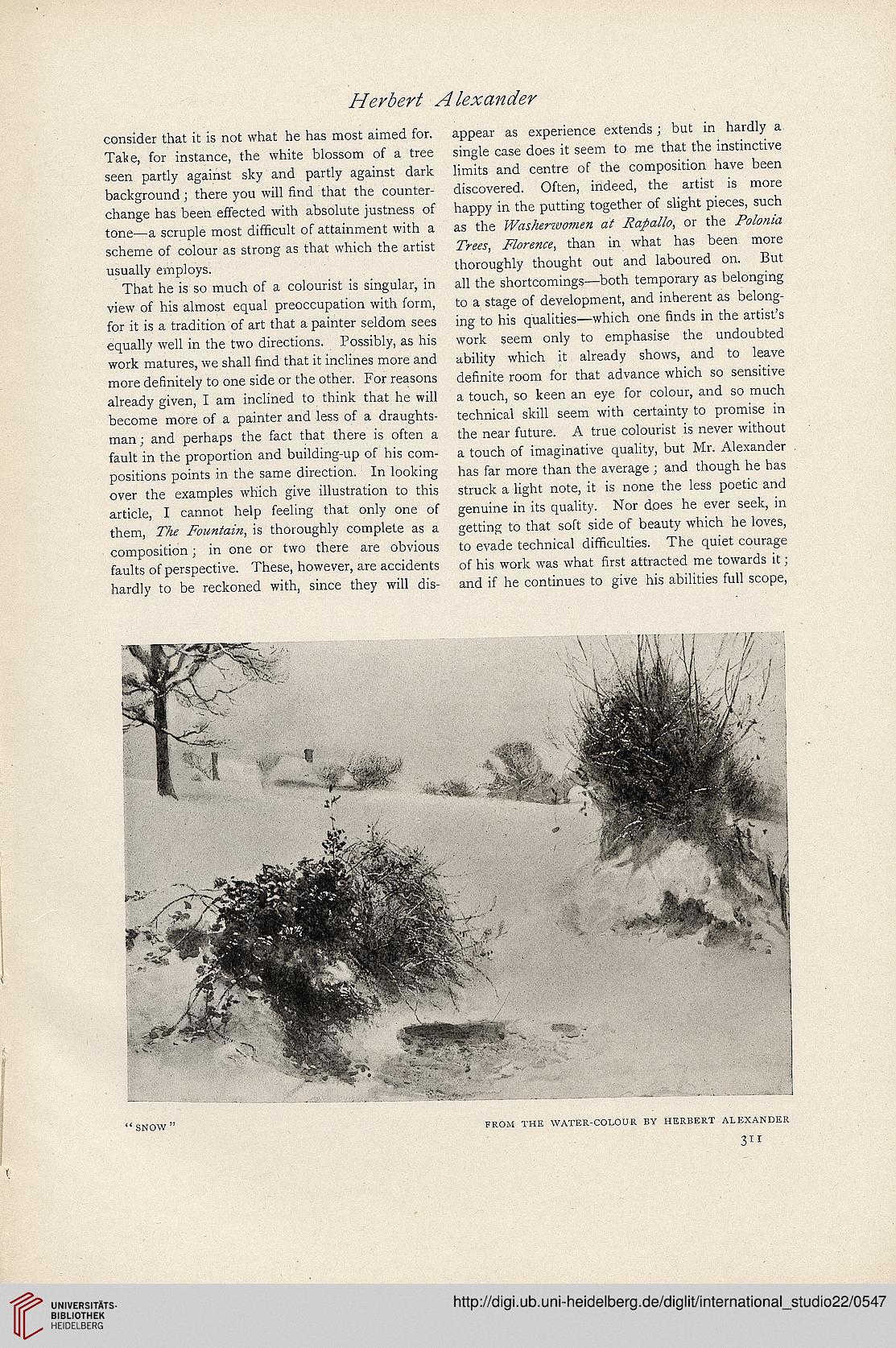 consider that it is not what he has most aimed for.
Take, for instance, the white blossom of a tree
seen partly against sky and partly against dark
background; there you wiil Snd that the counter-
change has been effected with absolute justness of
tone—a scruple most difficult of attainment with a
scheme of colour as strong as that which the artist
usually employs.
That he is so much of a colourist is singular, in
view of his almost equal preoccupation with form,
for it is a tradition of art that a painter seldom sees
equally well in the two directions. Possibly, as his
work matures, we shall And that it inclines more and
more definitely to one side or the other. For reasons
already given, I am inclined to think that he will
become more of a painter and less of a draughts-
man; and perhaps the fact that there is often a
fault in the proportion and building-up of his com-
positions points in the same direction. In looking
over the examples which give illustration to this
article, I cannot help feeling that only one of
them, AvMTzAwz, is thoroughly complete as a
composition; in one or two there are obvious
faults of perspective. These, however, are accidents
hardly to be reckoned with, since they will dis-

appear as experience extends; but in hardly a
single case does it seem to me that the instinctive
limits and centre of the composition have been
discovered. Often, indeed, the artist is more
happy in the putting together of slight pieces, such
as the IFlM/%g7'!W77^73 <z2 or the TWwz/lz
YkgM, than in what has been more
thoroughly thought out and laboured on. But
all the shortcomings—both temporary as belonging
to a stage of development, and inherent as belong-
ing to his qualities—which one finds in the artist's
work seem only to emphasise the undoubted
ability which it already shows, and to leave
definite room for that advance which so sensitive
a touch, so keen an eye for colour, and so much
technical skill seem with certainty to promise in
the near future. A true colourist is never without
a touch of imaginative quality, but Mr. Alexander
has far more than the average ; and though he has
struck a light note, it is none the less poetic and
genuine in its quality. Nor does he ever seek, in
getting to that soft side of beauty which he loves,
to evade technical difficulties. The quiet courage
of his work was what first attracted me towards it;
and if he continues to give his abilities full scope,