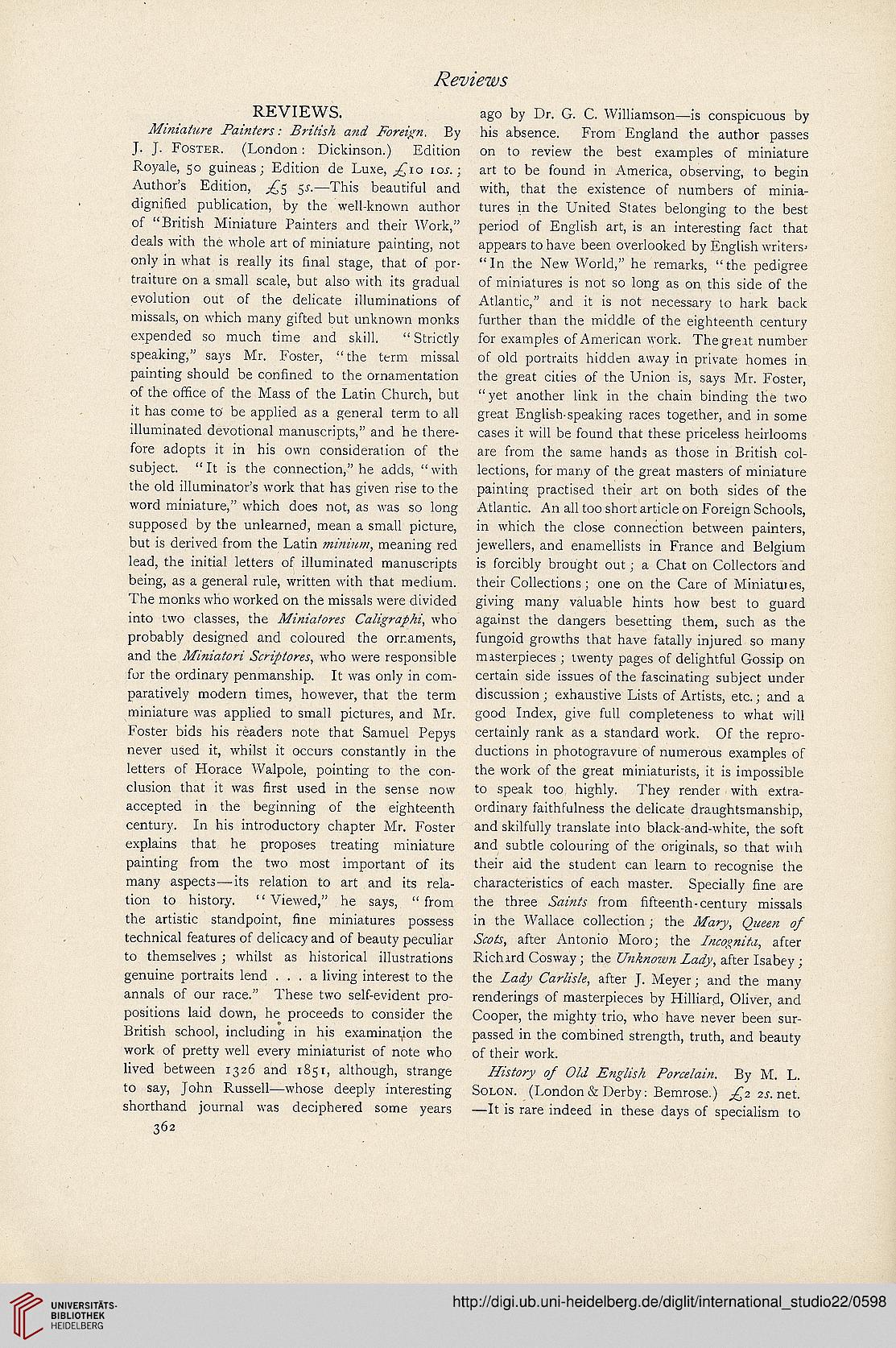 REVIEWS.
.- ZH/AA aM<^ Zh^rJ^. By
J. J. FOSTER. (London: Dickinson.) Edition
Royale, go guineas; Edition de Luxe, ^ro tor.;
Author's Edition, gr.—This beautiful and
dignified publication, by the well-known author
of "British Miniature Painters and their Work,"
deals with the whole art of miniature painting, not
only in what is really its final stage, that of por-
traiture on a small scale, but also with its gradual
evolution out of the delicate illuminations of
missals, on which many gifted but unknown monks
expended so much time and skill. " Strictly
speaking," says Mr. Foster, "the term missal
painting should be confined to the ornamentation
of the office of the Mass of the Latin Church, but
it has come to be applied as a general term to all
illuminated devotional manuscripts," and he there-
fore adopts it in his own consideration of the
subject. " It is the connection," he adds, " with
the old illuminator's work that has given rise to the
word miniature," which does not, as was so long
supposed by the unlearned, mean a small picture,
but is derived from the Latin meaning red
lead, the initial letters of illuminated manuscripts
being, as a general rule, written with that medium.
The monks who worked on the missals were divided
into two classes, the CaZ^a^Az', who
probably designed and coloured the ornaments,
and the AZ'zzz'a/aH .SHy/Vaf-M, who were responsible
for the ordinary penmanship. It was only in com-
paratively modern times, however, that the term
miniature was applied to small pictures, and Mr.
Foster bids his readers note that Samuel Pepys
never used it, whilst it occurs constantly in the
letters of Horace Walpole, pointing to the con-
clusion that it was first used in the sense now
accepted in the beginning of the eighteenth
century. In his introductory chapter Mr. Foster
explains that he proposes treating miniature
painting from the two most important of its
many aspects—its relation to art and its rela-
tion to history. '' Viewed," he says, " from
the artistic standpoint, fine miniatures possess
technical features of delicacy and of beauty peculiar
to themselves ; whilst as historical illustrations
genuine portraits lend ... a living interest to the
annals of our race." These two self-evident pro-
positions laid down, he proceeds to consider the
British school, including in his examination the
work of pretty well every miniaturist of note who
lived between rg26 and r8gr, although, strange
to say, John Russell—whose deeply interesting
shorthand journal was deciphered some years
362

ago by Dr. G. C. Williamson—is conspicuous by
his absence. From England the author passes
on to review the best examples of miniature
art to be found in America, observing, to begin
with, that the existence of numbers of minia-
tures in the United States belonging to the best
period of English art, is an interesting fact that
appears to have been overlooked by English writers'
"In the New World," he remarks, "the pedigree
of miniatures is not so long as on this side of the
Atlantic," and it is not necessary to hark back
further than the middle of the eighteenth century
for examples of American work. The great number
of old portraits hidden away in private homes in
the great cities of the Union is, says Mr. Foster,
"yet another link in the chain binding the two
great English-speaking races together, and in some
cases it will be found that these priceless heirlooms
are from the same hands as those in British col-
lections, for many of the great masters of miniature
painting practised their art on both sides of the
Atlantic. An all too short article on Foreign Schools,
in which the close connection between painters,
jewellers, and enamellists in France and Belgium
is forcibly brought out; a Chat on Collectors and
their Collections; one on the Care of Miniatures,
giving many valuable hints how best to guard
against the dangers besetting them, such as the
fungoid growths that have fatally injured so many
masterpieces ; twenty pages of delightful Gossip on
certain side issues of the fascinating subject under
discussion ; exhaustive Lists of Artists, etc.; and a
good Index, give full completeness to what will
certainly rank as a standard work. Of the repro-
ductions in photogravure of numerous examples of
the work of the great miniaturists, it is impossible
to speak too highly. They render with extra-
ordinary faithfulness the delicate draughtsmanship,
and skilfully translate into black-and-white, the soft
and subtle colouring of the originals, so that wiih
their aid the student can learn to recognise the
characteristics of each master. Specially fine are
the three Za/aZv from fifteenth-century missals
in the Wallace collection; the AZary, (ZiW/z
.SlraA, after Antonio Moro; the Zwa^Aa, after
Richard Cosway; the ZZzAzzawzz ZazZy, after Isabey ;
the Za<Zy Car/AA, after J. Meyer; and the many
renderings of masterpieces by Hilliard, Oliver, and
Cooper, the mighty trio, who have never been sur-
passed in the combined strength, truth, and beauty
of their work.
ZfAZazy a/ ZAZ Z*72gVAA Zaz-^Az/a. By M. L.
SoLON. (London & Derby :Bemrose.) ^(22^. net.
—It is rare indeed in these days of specialism to