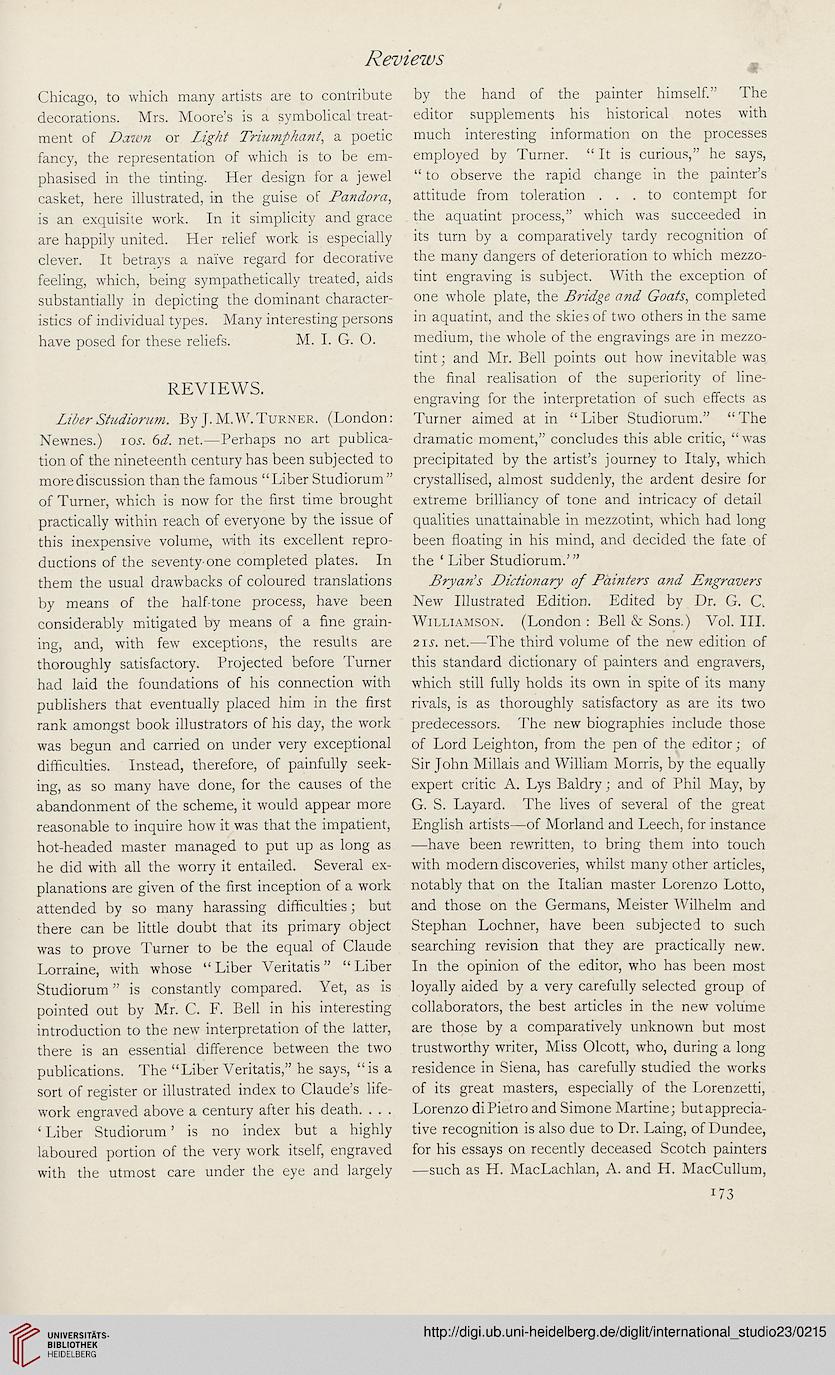 Chicago, to which many artists are to contribute
decorations. Mrs. Moore’s is a symbolical treat-
ment of Dawn or Light Triumphant, a poetic
fancy, the representation of which is to be em-
phasised in the tinting. Her design for a jewel
casket, here illustrated, in the guise of Pandora,
is an exquisite work. In it simplicity and grace
are happily united. Her relief work is especially
clever. It betrays a naive regard for decorative
feeling, which, being sympathetically treated, aids
substantially in depicting the dominant character-
istics of individual types. Many interesting persons
have posed for these reliefs. M. I. G. O.
REVIEWS.
Liber Studiorum. ByJ.M.W.Turner. (London:
Newnes.) io.r. 6d. net.—Perhaps no art publica-
tion of the nineteenth century has been subjected to
more discussion than the famous “Liber Studiorum ”
of Turner, which is now for the first time brought
practically within reach of everyone by the issue of
this inexpensive volume, with its excellent repro-
ductions of the seventy-one completed plates. In
them the usual drawbacks of coloured translations
by means of the half-tone process, have been
considerably mitigated by means of a fine grain-
ing, and, with few exceptions, the results are
thoroughly satisfactory. Projected before Turner
had laid the foundations of his connection with
publishers that eventually placed him in the first
rank amongst book illustrators of his day, the work
was begun and carried on under very exceptional
difficulties. Instead, therefore, of painfully seek-
ing, as so many have done, for the causes of the
abandonment of the scheme, it would appear more
reasonable to inquire how it was that the impatient,
hot-headed master managed to put up as long as
he did with all the worry it entailed. Several ex-
planations are given of the first inception of a work
attended by so many harassing difficulties; but
there can be little doubt that its primary object
was to prove Turner to be the equal of Claude
Lorraine, with whose “ Liber Veritatis ” “ Liber
Studiorum ” is constantly compared. Yet, as is
pointed out by Mr. C. F. Bell in his interesting
introduction to the new interpretation of the latter,
there is an essential difference between the two
publications. The “Liber Veritatis,” he says, “is a
sort of register or illustrated index to Claude’s life-
work engraved above a century after his death. . . .
‘ Liber Studiorum ’ is no index but a highly
laboured portion of the very work itself, engraved
with the utmost care under the eye and largely

by the hand of the painter himself.” The
editor supplements his historical notes with
much interesting information on the processes
employed by Turner. “ It is curious,” he says,
“ to observe the rapid change in the painter’s
attitude from toleration ... to contempt for
the aquatint process,” which was succeeded in
its turn by a comparatively tardy recognition of
the many dangers of deterioration to which mezzo-
tint engraving is subject. With the exception of
one whole plate, the B7-idge and Goats, completed
in aquatint, and the skies of two others in the same
medium, the whole of the engravings are in mezzo-
tint; and Mr. Bell points out how inevitable was
the final realisation of the superiority of line-
engraving for the interpretation of such effects as
Turner aimed at in “Liber Studiorum.” “The
dramatic moment,” concludes this able critic, “ was
precipitated by the artist’s journey to Italy, which
crystallised, almost suddenly, the ardent desire for
extreme brilliancy of tone and intricacy of detail
qualities unattainable in mezzotint, which had long
been floating in his mind, and decided the fate of
the ‘ Liber Studiorum.’ ”
Bryan’s Dictionary of Painters and Engravers
New Illustrated Edition. Edited by Dr. G. C,
Williamson. (London : Bell & Sons.) Vol. III.
2i5. net.—The third volume of the new edition of
this standard dictionary of painters and engravers,
which still fully holds its own in spite of its many
rivals, is as thoroughly satisfactory as are its two
predecessors. The new biographies include those
of Lord Leighton, from the pen of the editor; of
Sir John Millais and William Morris, by the equally
expert critic A. Lys Baldry; and of Phil May, by
G. S. Layard. The lives of several of the great
English artists—of Morland and Leech, for instance
—have been rewritten, to bring them into touch
with modern discoveries, whilst many other articles,
notably that on the Italian master Lorenzo Lotto,
and those on the Germans, Meister Wilhelm and
Stephan Lochner, have been subjected to such
searching revision that they are practically new.
In the opinion of the editor, who has been most
loyally aided by a very carefully selected group of
collaborators, the best articles in the new volume
are those by a comparatively unknown but most
trustworthy writer, Miss Olcott, who, during a long
residence in Siena, has carefully studied the works
of its great masters, especially of the Lorenzetti,
Lorenzo diPietro and Simone Martine; butapprecia-
tive recognition is also due to Dr. Laing, of Dundee,
for his essays on recently deceased Scotch painters
—such as H. MacLachlan, A. and H. MacCullum,
173