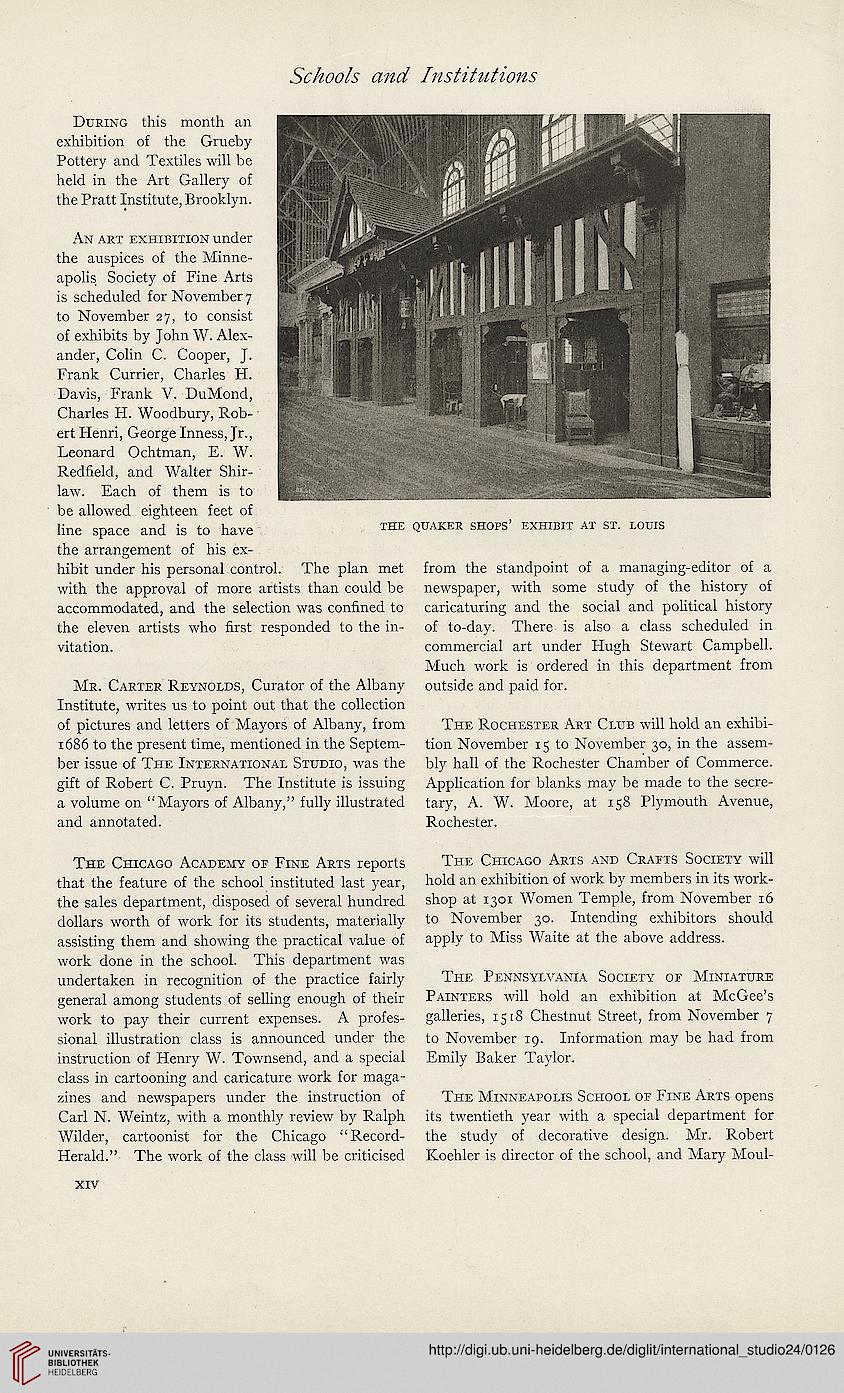 
During this month an
exhibition of the Grueby
Pottery and Textiles will be
held in the Art Gallery of
the Pratt Institute, Brooklyn.
An art exhibition under
the auspices of the Minne-
apolis Society of Fine Arts
is scheduled for November 7
to November 27, to consist
of exhibits by John W. Alex-
ander, Colin C. Cooper, J.
Frank Currier, Charles H.
Davis, Frank V. DuMond,
Charles H. Woodbury, Rob-
ert Henri, George Inness, Jr.,
Leonard Ochtman, E. W.
Redfield, and Walter Shir-
law. Each of them is to
be allowed eighteen feet of
line space and is to have
the arrangement of his ex-
hibit under his personal control. The plan met
with the approval of more artists than could be
accommodated, and the selection was confined to
the eleven artists who first responded to the in-
vitation.
Mr. Carter Reynolds, Curator of the Albany
Institute, writes us to point out that the collection
of pictures and letters of Mayors of Albany, from
1686 to the present time, mentioned in the Septem-
ber issue of The International Studio, was the
gift of Robert C. Pruyn. The Institute is issuing
a volume on “Mayors of Albany,” fully illustrated
and annotated.

from the standpoint of a managing-editor of a
newspaper, with some study of the history of
caricaturing and the social and political history
of to-day. There is also a class scheduled in
commercial art under Hugh Stewart Campbell.
Much work is ordered in this department from
outside and paid for.
The Rochester Art Club will hold an exhibi-
tion November 15 to November 30, in the assem-
bly hall of the Rochester Chamber of Commerce.
Application for blanks may be made to the secre-
tary, A. W. Moore, at 158 Plymouth Avenue,
Rochester.

The Chicago Academy of Fine Arts reports
that the feature of the school instituted last year,
the sales department, disposed of several hundred
dollars worth of work for its students, materially
assisting them and showing the practical value of
work done in the school. This department was
undertaken in recognition of the practice fairly
general among students of selling enough of their
work to pay their current expenses. A profes-
sional illustration class is announced under the
instruction of Henry W. Townsend, and a special
class in cartooning and caricature work for maga-
zines and newspapers under the instruction of
Carl N. Weintz, with a monthly review by Ralph
Wilder, cartoonist for the Chicago “Record-
Herald.” The work of the class will be criticised

The Chicago Arts and Crafts Society will
hold an exhibition of work by members in its work-
shop at 1301 Women Temple, from November 16
to November 30. Intending exhibitors should
apply to Miss Waite at the above address.
The Pennsylvania Society of Miniature
Painters will hold an exhibition at McGee’s
galleries, 1518 Chestnut Street, from November 7
to November 19. Information may be had from
Emily Baker Taylor.
The Minneapolis School of Fine Arts opens
its twentieth year with a special department for
the study of decorative design. Mr. Robert
Koehler is director of the school, and Mary Moul-