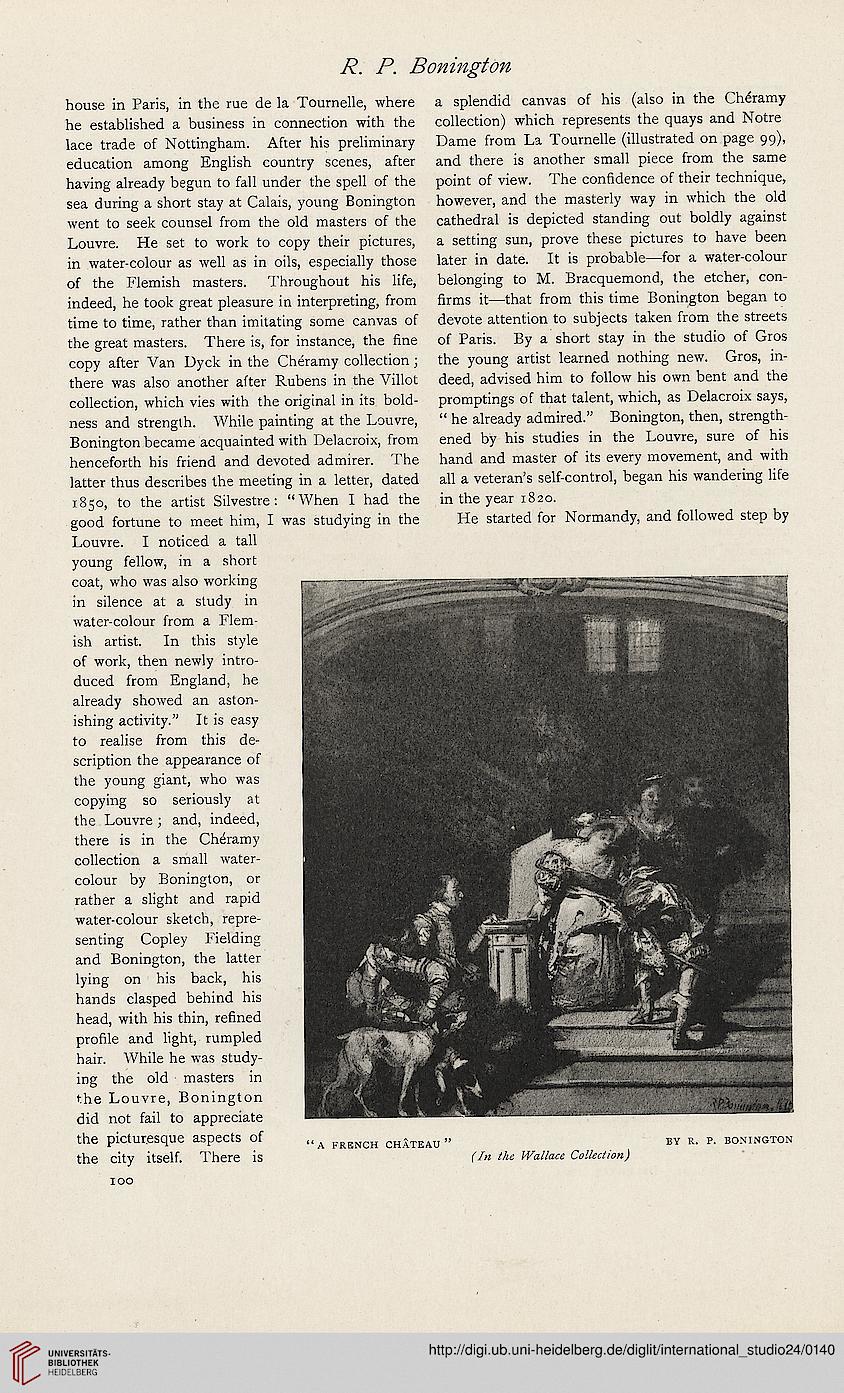 house in Paris, in the rue de la Tournelle, where
he established a business in connection with the
lace trade of Nottingham. After his preliminary
education among English country scenes, after
having already begun to fall under the spell of the
sea during a short stay at Calais, young Bonington
went to seek counsel from the old masters of the
Louvre. He set to work to copy their pictures,
in water-colour as well as in oils, especially those
of the Flemish masters. Throughout his life,
indeed, he took great pleasure in interpreting, from
time to time, rather than imitating some canvas of
the great masters. There is, for instance, the fine
copy after Van Dyck in the Cheramy collection ;
there was also another after Rubens in the Villot
collection, which vies with the original in its bold-
ness and strength. While painting at the Louvre,
Bonington became acquainted with Delacroix, from
henceforth his friend and devoted admirer. The
latter thus describes the meeting in a letter, dated
1850, to the artist Silvestre: “When I had the
good fortune to meet him, I was studying in the
Louvre. I noticed a tall
young fellow, in a short
coat, who was also working
in silence at a study in
water-colour from a Flem-
ish artist. In this style
of work, then newly intro-
duced from England, he
already showed an aston-
ishing activity.” It is easy
to realise from this de-
scription the appearance of
the young giant, who was
copying so seriously at
the Louvre ; and, indeed,
there is in the Cheramy
collection a small water-
colour by Bonington, or
rather a slight and rapid
water-colour sketch, repre-
senting Copley Fielding
and Bonington, the latter
lying on his back, his
hands clasped behind his
head, with his thin, refined
profile and light, rumpled
hair. While he was study-
ing the old masters in
the Louvre, Bonington
did not fail to appreciate
the picturesque aspects of
the city itself. There is

a splendid canvas of his (also in the Cheramy
collection) which represents the quays and Notre
Dame from La Tournelle (illustrated on page 99),
and there is another small piece from the same
point of view. The confidence of their technique,
however, and the masterly way in which the old
cathedral is depicted standing out boldly against
a setting sun, prove these pictures to have been
later in date. It is probable—for a water-colour
belonging to M. Bracquemond, the etcher, con-
firms it—that from this time Bonington began to
devote attention to subjects taken from the streets
of Paris. By a short stay in the studio of Gros
the young artist learned nothing new. Gros, in-
deed, advised him to follow his own bent and the
promptings of that talent, which, as Delacroix says,
“ he already admired.” Bonington, then, strength-
ened by his studies in the Louvre, sure of his
hand and master of its every movement, and with
all a veteran’s self-control, began his wandering life
in the year T820.
He started for Normandy, and followed step by

(In the Wallace Collection)