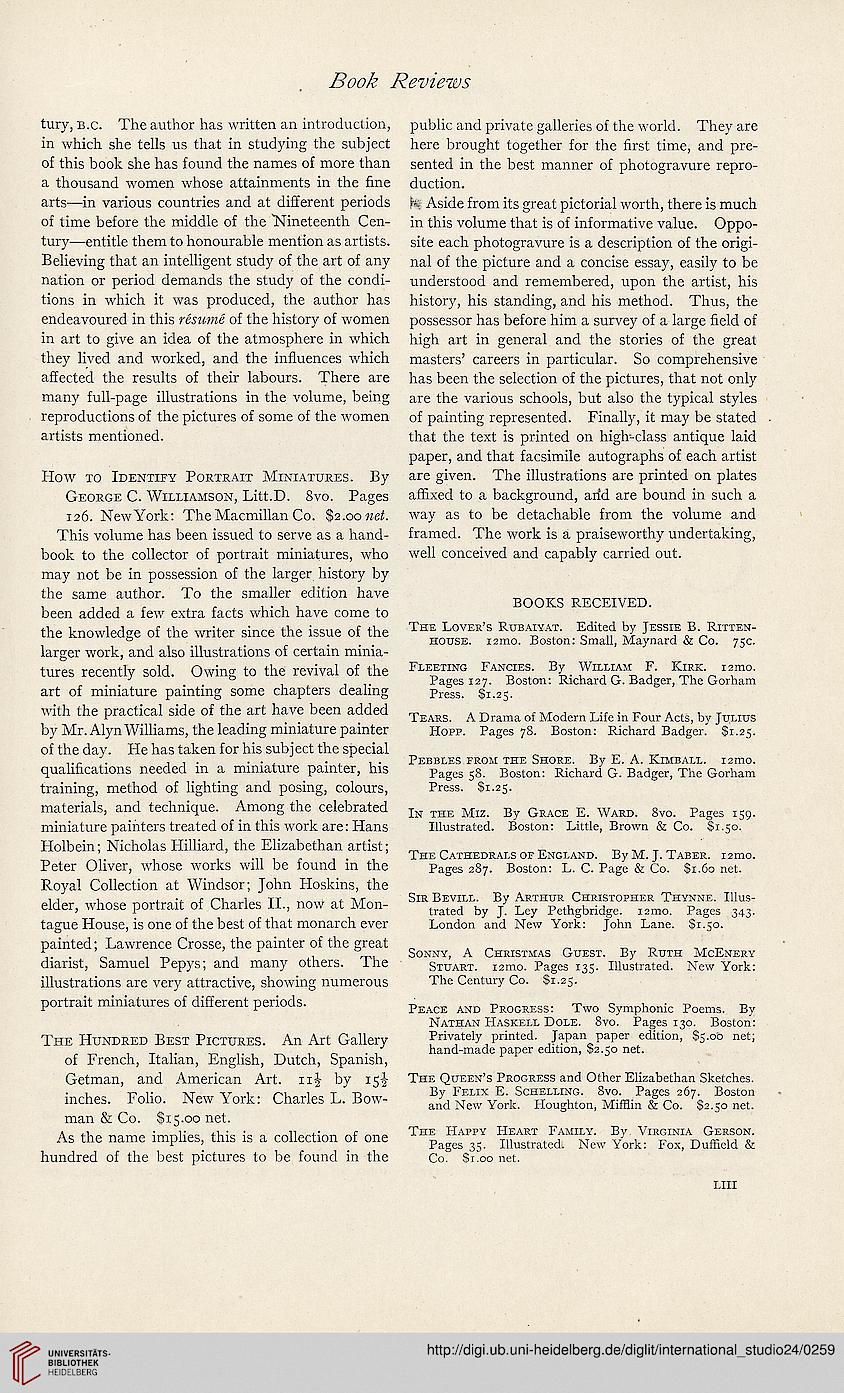 tury, b.c. The author has written an introduction,
in which she tells us that in studying the subject
of this book she has found the names of more than
a thousand women whose attainments in the fine
arts—in various countries and at different periods
of time before the middle of the Nineteenth Cen-
tury—entitle them to honourable mention as artists.
Believing that an intelligent study of the art of any
nation or period demands the study of the condi-
tions in which it was produced, the author has
endeavoured in this resume of the history of women
in art to give an idea of the atmosphere in which
they lived and worked, and the influences which
affected the results of their labours. There are
many full-page illustrations in the volume, being
reproductions of the pictures of some of the women
artists mentioned.
How xo Identify Portrait Miniatures. By
George C. Williamson, Litt.D. 8vo. Pages
126. New York: The Macmillan Co. $2.00 net.
This volume has been issued to serve as a hand-
book to the collector of portrait miniatures, who
may not be in possession of the larger history by
the same author. To the smaller edition have
been added a few extra facts which have come to
the knowledge of the writer since the issue of the
larger work, and also illustrations of certain minia-
tures recently sold. Owing to the revival of the
art of miniature painting some chapters dealing
with the practical side of the art have been added
by Mr. Alyn Williams, the leading miniature painter
of the day. He has taken for his subject the special
qualifications needed in a miniature painter, his
training, method of lighting and posing, colours,
materials, and technique. Among the celebrated
miniature painters treated of in this work are: Hans
Holbein; Nicholas Hilliard, the Elizabethan artist;
Peter Oliver, whose works will be found in the
Royal Collection at Windsor; John Hoskins, the
elder, whose portrait of Charles II., now at Mon-
tague House, is one of the best of that monarch ever
painted; Lawrence Crosse, the painter of the great
diarist, Samuel Pepys; and many others. The
illustrations are very attractive, showing numerous
portrait miniatures of different periods.
The Hundred Best Pictures. An Art Gallery
of French, Italian, English, Dutch, Spanish,
Getman, and American Art. nj by 151-
inches. Folio. New York: Charles L. Bow-
man & Co. $15.00 net.
As the name implies, this is a collection of one
hundred of the best pictures to be found in the

public and private galleries of the world. They are
here brought together for the first time, and pre-
sented in the best manner of photogravure repro-
duction.
N Aside from its great pictorial worth, there is much
in this volume that is of informative value. Oppo-
site each photogravure is a description of the origi-
nal of the picture and a concise essay, easily to be
understood and remembered, upon the artist, his
history, his standing, and his method. Thus, the
possessor has before him a survey of a large field of
high art in general and the stories of the great
masters’ careers in particular. So comprehensive
has been the selection of the pictures, that not only
are the various schools, but also the typical styles
of painting represented. Finally, it may be stated
that the text is printed on high-class antique laid
paper, and that facsimile autographs of each artist
are given. The illustrations are printed on plates
affixed to a background, arid are bound in such a
way as to be detachable from the volume and
framed. The work is a praiseworthy undertaking,
well conceived and capably carried out.
BOOKS RECEIVED.
The Lover’s Rubaiyat. Edited by Jessie B. Ritten-
house. i2mo. Boston: Small, Maynard & Co. 75c.
Fleeting Fancies. By William F. Kirk. i2mo.
Pages 127. Boston: Richard G. Badger, The Gorham
Press. $1.25.
Tears. A Drama of Modern Life in Four Acts, by Julius
Hopp. Pages 78. Boston: Richard Badger. $1.25.
Pebbles from the Shore. By E. A. Kimball. i2mo.
Pages 58. Boston: Richard G. Badger, The Gorham
Press. $1.25.
In the Miz. By Grace E. Ward. 8vo. Pages 159.
Illustrated. Boston: Little, Brown & Co. $1.50.
The Cathedrals of England. By M. J. Taber. i2mo.
Pages 287. Boston: L. C. Page & Co. $1.60 net.
Sir Bevill. By Arthur Christopher Thynne. Illus-
trated by J. Ley Pethgbridge. i2mo. Pages 343.
London and New York: John Lane. Si.50.
Sonny, A Christmas Guest. By Ruth McEnery
Stuart. i2mo. Pages 135. Illustrated. New York:
The Century Co. $1.25.
Peace and Progress: Two Symphonic Poems. By
Nathan Haskell Dole. 8vo. Pages 130. Boston:
Privately printed. Japan paper edition, $5.00 net;
hand-made paper edition, $2.50 net.
The Queen’s Progress and Other Elizabethan Sketches.
By Felix E. Schelling. 8vo. Pages 267. Boston
and New York. Houghton, Mifflin & Co. $2.50 net.
The Happy Heart Family. By Virginia Gerson.
Pages 35. Illustrated. New York: Fox, Duffield &
Co. $1.00 net.