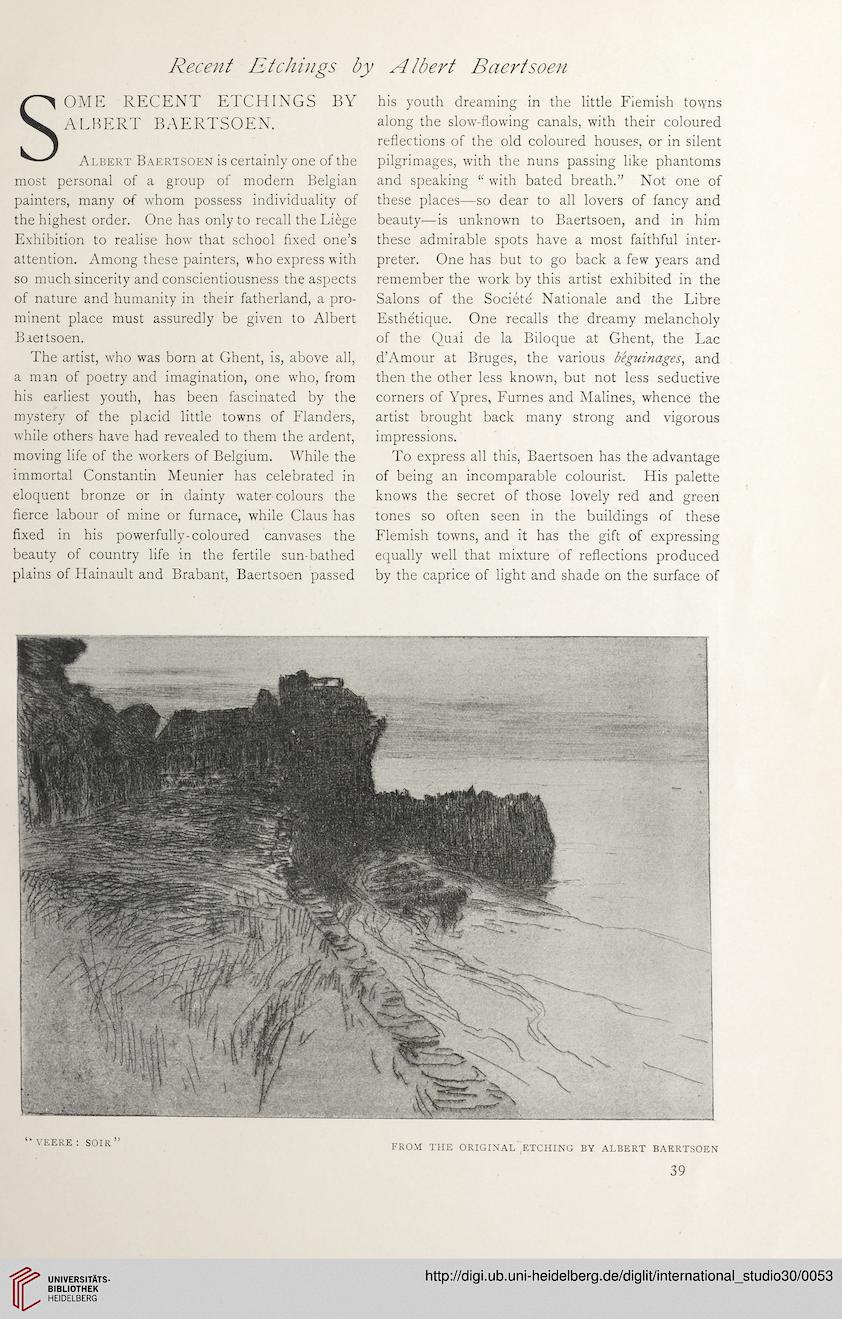 SOME RECENT ETCHINGS BY
ALBERT BAERTSOEN.
Albert Baertsoen is certainly one of the
most personal of a group of modern Belgian
painters, many of whom possess individuality of
the highest order. One has only to recall the Liege
Exhibition to realise how that school fixed one’s
attention. Among these painters, who express with
so much sincerity and conscientiousness the aspects
of nature and humanity in their fatherland, a pro-
minent place must assuredly be given to Albert
Baertsoen.
The artist, wrho was born at Ghent, is, above all,
a man of poetry and imagination, one w7ho, from
his earliest youth, has been fascinated by the
mystery of the placid little towns of Flanders,
while others have had revealed to them the ardent,
moving life of the workers of Belgium. While the
immortal Constantin Meunier has celebrated in
eloquent bronze or in dainty water colours the
fierce labour of mine or furnace, while Claus has
fixed in his powerfully-coloured canvases the
beauty of country life in the fertile sun-bathed
plains of Hainault and Brabant, Baertsoen passed

his youth dreaming in the little Flemish to\yns
along the slow-flowing canals, with their coloured
reflections of the old coloured houses, or in silent
pilgrimages, with the nuns passing like phantoms
and speaking “ with bated breath.” Not one of
these places—so dear to all lovers of fancy and
beauty—is unknown to Baertsoen, and in him
these admirable spots have a most faithful inter-
preter. One has but to go back a few years and
remember the work by this artist exhibited in the
Salons of the Societe Nationale and the Libre
Esthetique. One recalls the dreamy melancholy
of the Quai de la Biloque at Ghent, the Lac
d’Amour at Bruges, the various beguinages, and
then the other less known, but not less seductive
corners of Ypres, Furnes and Malines, whence the
artist brought back many strong and vigorous
impressions.
To express all this, Baertsoen has the advantage
of being an incomparable colourist. His palette
knows the secret of those lovely red and green
tones so often seen in the buildings of these
Flemish towns, and it has the gift of expressing
equally well that mixture of reflections produced
by the caprice of light and shade on the surface of

FROM THE ORIGINAL‘ ETCHING BY ALBERT BAERTSOEN