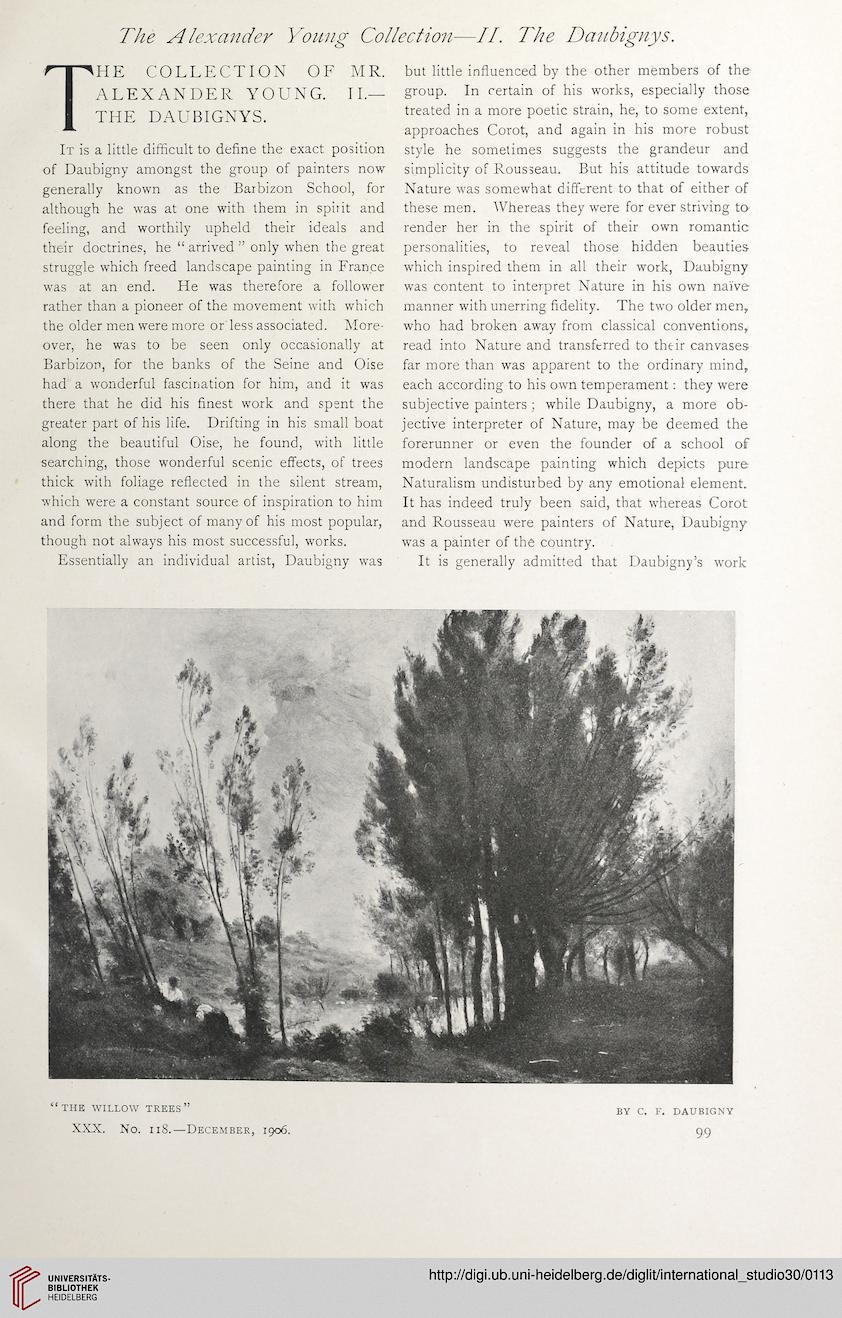 Hinweise zum OCR-Text
The A lex under Young Collection—II. The Daubignys.

The collection of mr.
ALEXANDER YOUNG. II.—
THE DAUBIGNYS.
It is a little difficult to define the exact position
of Daubigny amongst the group of painters now
generally known as the Barbizon School, for
although he was at one with them in spit it and
feeling, and worthily upheld their ideals and
their doctrines, he “ arrived ” only when the great
struggle which freed landscape painting in France
was at an end. He was therefore a follower
rather than a pioneer of the movement with which
the older men were more or'less associated. More-
over, he was to be seen only occasionally at
Barbizon, for the banks of the Seine and Oise
had a wonderful fascination for him, and it was
there that he did his finest work and spent the
greater part of his life. Drifting in his small boat
along the beautiful Oise, he found, with little
searching, those wonderful scenic effects, of trees
thick with foliage reflected in the silent stream,
which were a constant source of inspiration to him
and form the subject of many of his most popular,
though not always his most successful, works.
Essentially an individual artist, Daubigny was

but little influenced by the other members of the
group. In certain of his works, especially those
treated in a more poetic strain, he, to some extent,
approaches Corot, and again in his more robust
style he sometimes suggests the grandeur and
simplicity of Rousseau. But his attitude towards
Nature was somewhat different to that of either of
these men. Whereas they were for ever striving to
render her in the spirit of their own romantic
personalities, to reveal those hidden beauties
which inspired them in all their work, Daubigny
was content to interpret Nature in his own naive
manner with unerring fidelity. The two older men,
who had broken away from classical conventions,
read into Nature and transferred to their canvases
far more than was apparent to the ordinary mind,
each according to his own temperament: they were
subjective painters; while Daubigny, a more ob-
jective interpreter of Nature, may be deemed the
forerunner or even the founder of a school of
modern landscape painting which depicts pure
Naturalism undisturbed by any emotional element.
It has indeed truly been said, that whereas Corot
and Rousseau were painters of Nature, Daubigny
was a painter of the country.
It is generally admitted that Daubigny’s work