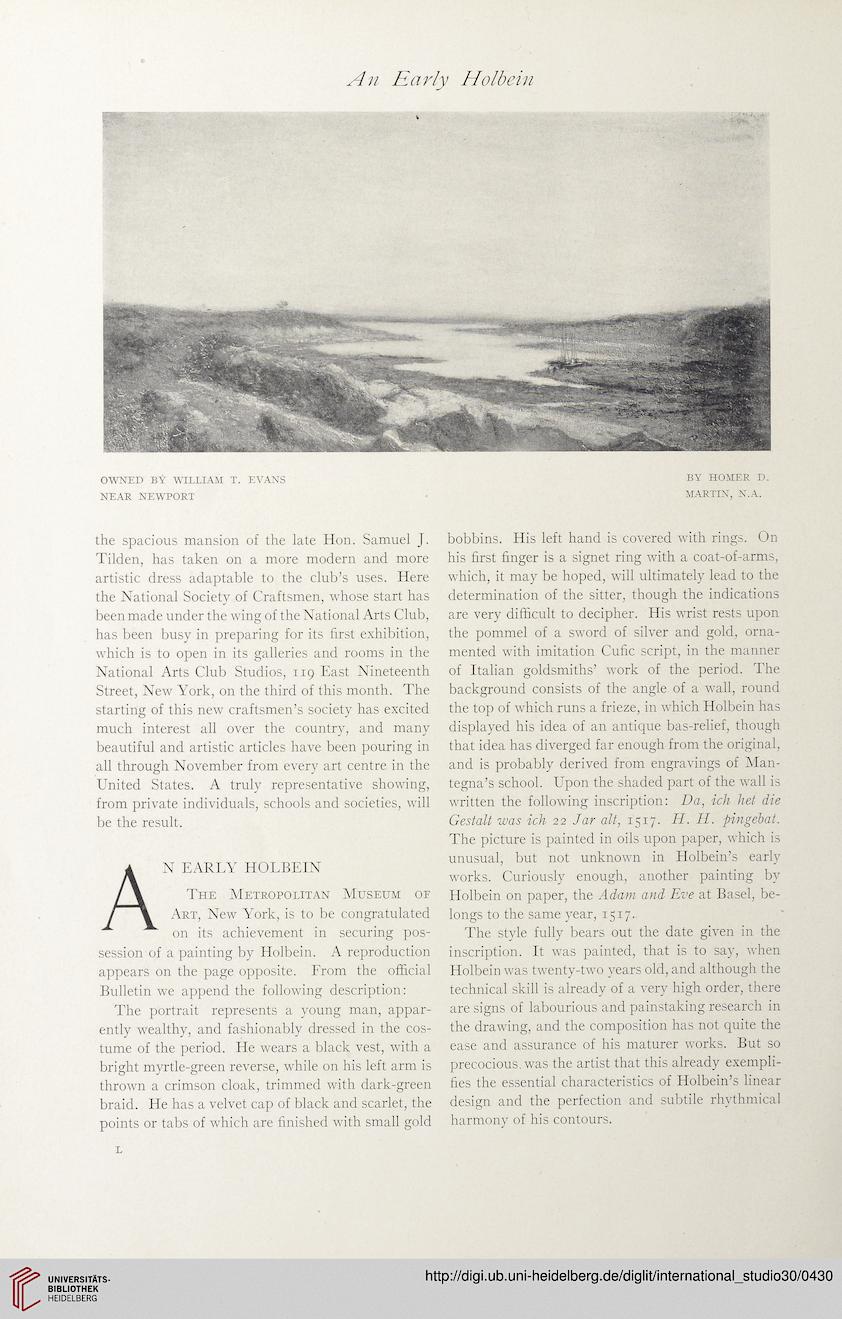 the spacious mansion of the late Hon. Samuel J.
Tilden, has taken on a more modern and more
artistic dress adaptable to the club’s uses. Here
the National Society of Craftsmen, whose start has
been made under the wing of the National Arts Club,
has been busy in preparing for its first exhibition,
which is to open in its galleries and rooms in the
National Arts Club Studios, 119 East Nineteenth
Street, New York, on the third of this month. The
starting of this new craftsmen’s society has excited
much interest all over the country, and many
beautiful and artistic articles have been pouring in
all through November from every art centre in the
United States. A truly representative showing,
from private individuals, schools and societies, will
be the result.
N EARLY HOLBEIN
The Metropolitan Museum of
Art, New York, is to be congratulated
on its achievement in securing pos-
session of a painting by Holbein. A reproduction
appears on the page opposite. From the official
Bulletin we append the following description:
The portrait represents a young man, appar-
ently wealthy, and fashionably dressed in the cos-
tume of the period. He wears a black vest, with a
bright myrtle-green reverse, while on his left arm is
thrown a crimson cloak, trimmed with dark-green
braid. He has a velvet cap of black and scarlet, the
points or tabs of which are finished with small gold

bobbins. His left hand is covered with rings. On
his first finger is a signet ring with a coat-of-arms,
which, it may be hoped, will ultimately lead to the
determination of the sitter, though the indications
are very difficult to decipher. His wrist rests upon
the pommel of a sword of silver and gold, orna-
mented with imitation Cufic script, in the manner
of Italian goldsmiths’ work of the period. The
background consists of the angle of a wall, round
the top of which runs a frieze, in which Holbein has
displayed his idea of an antique bas-relief, though
that idea has diverged far enough from the original,
and is probably derived from engravings of Man-
tegna’s school. Upon the shaded part of the wall is
written the following inscription: Da, ich het die
Gestalt was ich 22 Jar alt, 1517. H. H. pingebat.
The picture is painted in oils upon paper, which is
unusual, but not unknown in Holbein’s early
works. Curiously enough, another painting by
Holbein on paper, the Adam and Eve at Basel, be-
longs to the same year, 1517.
The style fully bears out the date given in the
inscription. It was painted, that is to say, when
Holbein was twenty-two years old, and although the
technical skill is already of a very high order, there
are signs of labourious and painstaking research in
the drawing, and the composition has not quite the
ease and assurance of his maturer works. But so
precocious, was the artist that this already exempli-
fies the essential characteristics of Holbein’s linear
design and the perfection and subtile rhythmical
harmony of his contours.