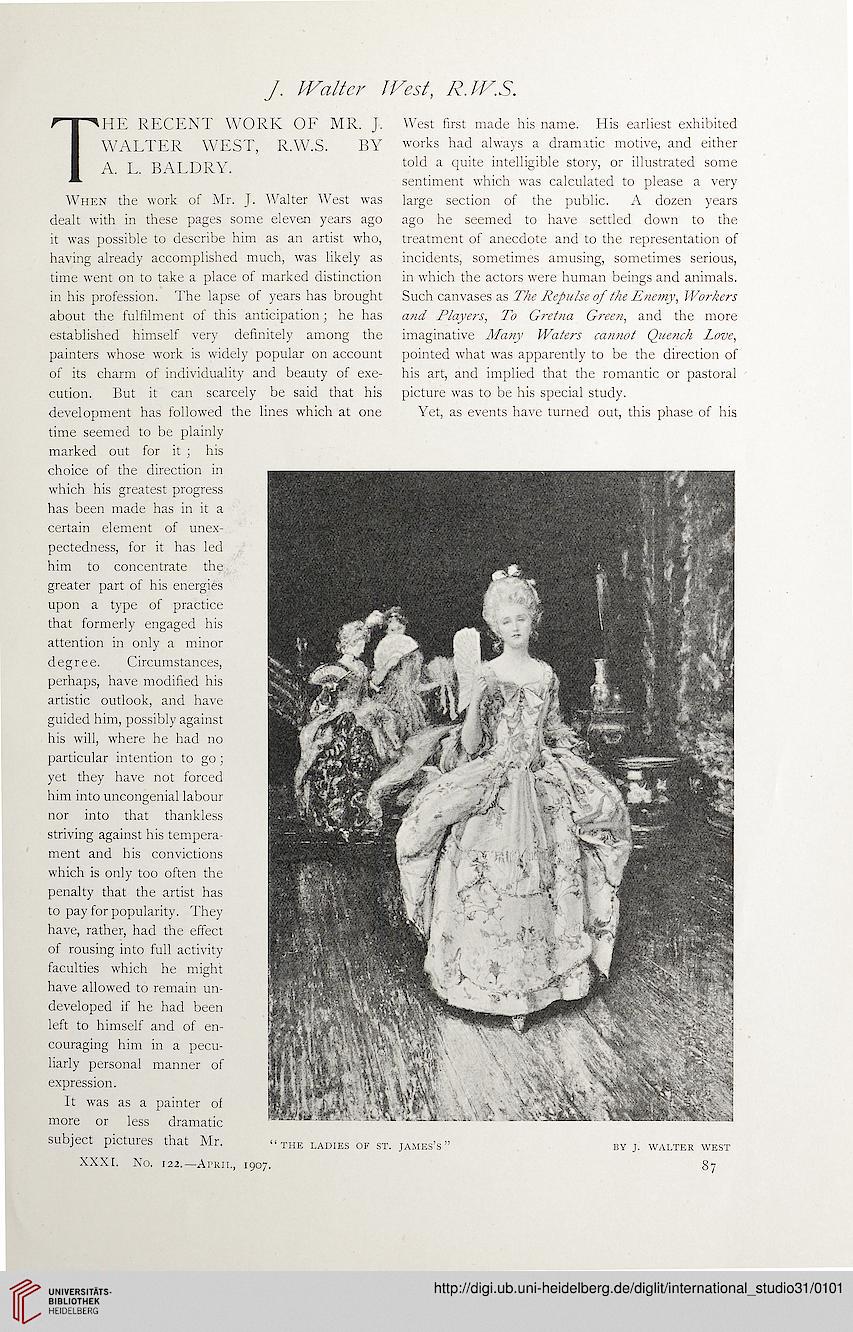 When the work of Mr. J. Walter West was
dealt with in these pages some eleven years ago
it was possible to describe him as an artist who,
having already accomplished much, was likely as
time went on to take a place of marked distinction
in his profession. The lapse of years has brought
about the fulfilment of this anticipation; he has
established himself very definitely among the
painters whose work is widely popular on account
of its charm of individuality and beauty of exe-
cution. But it can scarcely be said that his
development has followed the lines which at one
time seemed to be plainly
marked out for it ; his
choice of the direction in
which his greatest progress
has been made has in it a
certain element of unex-
pectedness, for it has led
him to concentrate the
greater part of his energies
upon a type of practice
that formerly engaged his
attention in only a minor
degree. Circumstances,
perhaps, have modified his
artistic outlook, and have
guided him, possibly against
his will, where he had no
particular intention to go ;
yet they have not forced
him into uncongenial labour
nor into that thankless
striving against his tempera-
ment and his convictions
which is only too often the
penalty that the artist has
to pay for popularity. They
have, rather, had the effect
of rousing into full activity
faculties which he might
have allowed to remain un-
developed if he had been
left to himself and of en-
couraging him in a pecu-
liarly personal manner of
expression.
It was as a painter of
more or less dramatic
subject pictures that Mr.

West first made his name. His earliest exhibited
works had always a dramatic motive, and either
told a quite intelligible story, or illustrated some
sentiment which was calculated to please a very
large section of the public. A dozen years
ago he seemed to have settled down to the
treatment of anecdote and to the representation of
incidents, sometimes amusing, sometimes serious,
in which the actors wrere human beings and animals.
Such canvases as The Repulse of the Enemy, Workers
and Players, To Gretna Green, and the more
imaginative Many Waters cannot Quench Love,
pointed what was apparently to be the direction of
his art, and implied that the romantic or pastoral
picture was to be his special study.
Yet, as events have turned out, this phase of his

“the ladies of st. james’s”