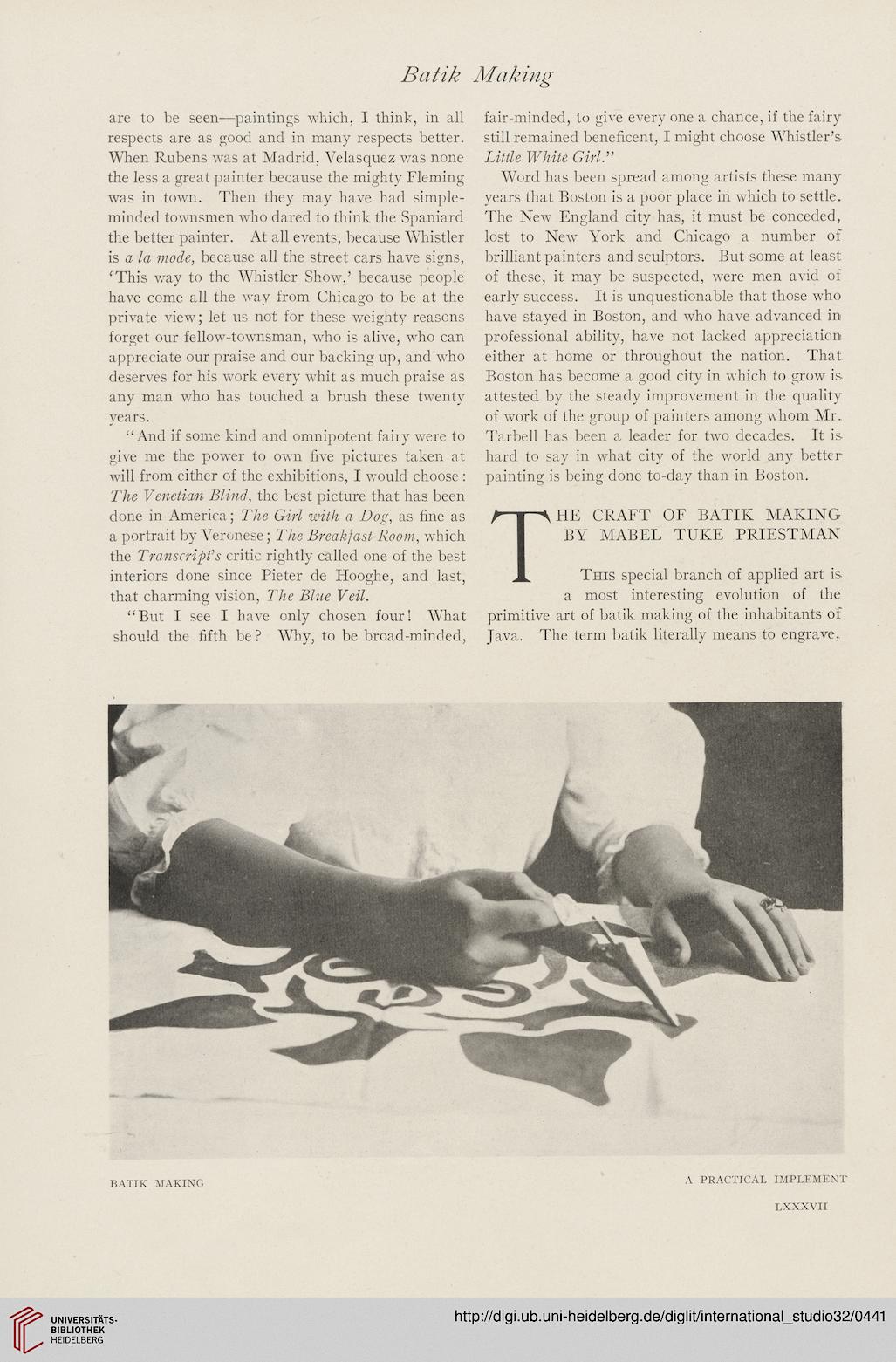 are to be seen—paintings which, I think, in all
respects are as good and in many respects better.
When Rubens was at Madrid, Velasquez was none
the less a great painter because the mighty Fleming
was in town. Then they may have had simple-
minded townsmen who dared to think the Spaniard
the better painter. At all events, because Whistler
is a la mode, because all the street cars have signs,
‘This way to the Whistler Show,’ because people
have come all the way from Chicago to be at the
private view; let us not for these weighty reasons
forget our fellow-townsman, who is alive, who can
appreciate our praise and our backing up, and who
deserves for his work every whit as much praise as
any man who has touched a brush these twenty
years.

“And if some kind and omnipotent fairy were to
give me the power to own five pictures taken at
will from either of the exhibitions, I would choose :
The Venetian Blind, the best picture that has been
done in America; The Girl with a Dog, as fine as
a portrait by Veronese; The Breakjast-Room, which
the Transcript’s critic rightly called one of the best
interiors done since Pieter de Hooghe, and last,
that charming vision, The Blue Veil.

“But I see I have only chosen four! What
should the fifth be ? Why, to be broad-minded,

fair-minded, to give every one a chance, if the fairy
still remained beneficent, I might choose Whistler’s
Little White Girl.”

Word has been spread among artists these many
years that Boston is a poor place in which to settle.
The New England city has, it must be conceded,
lost to New York and Chicago a number of
brilliant painters and sculptors. But some at least
of these, it may be suspected, were men avid of
early success. It is unquestionable that those who
have stayed in Boston, and who have advanced in
professional ability, have not lacked appreciation
either at home or throughout the nation. That
Boston has become a good city in which to grow is
attested by the steady improvement in the quality
of work of the group of painters among whom Mr.
Tarbell has been a leader for two decades. It is
hard to say in what city of the world any better
painting is being done to-day than in Boston.

The craft of batik making

This special branch of applied art is
a most interesting evolution of the
primitive art of batik making of the inhabitants of
Java. The term batik literally means to engrave.