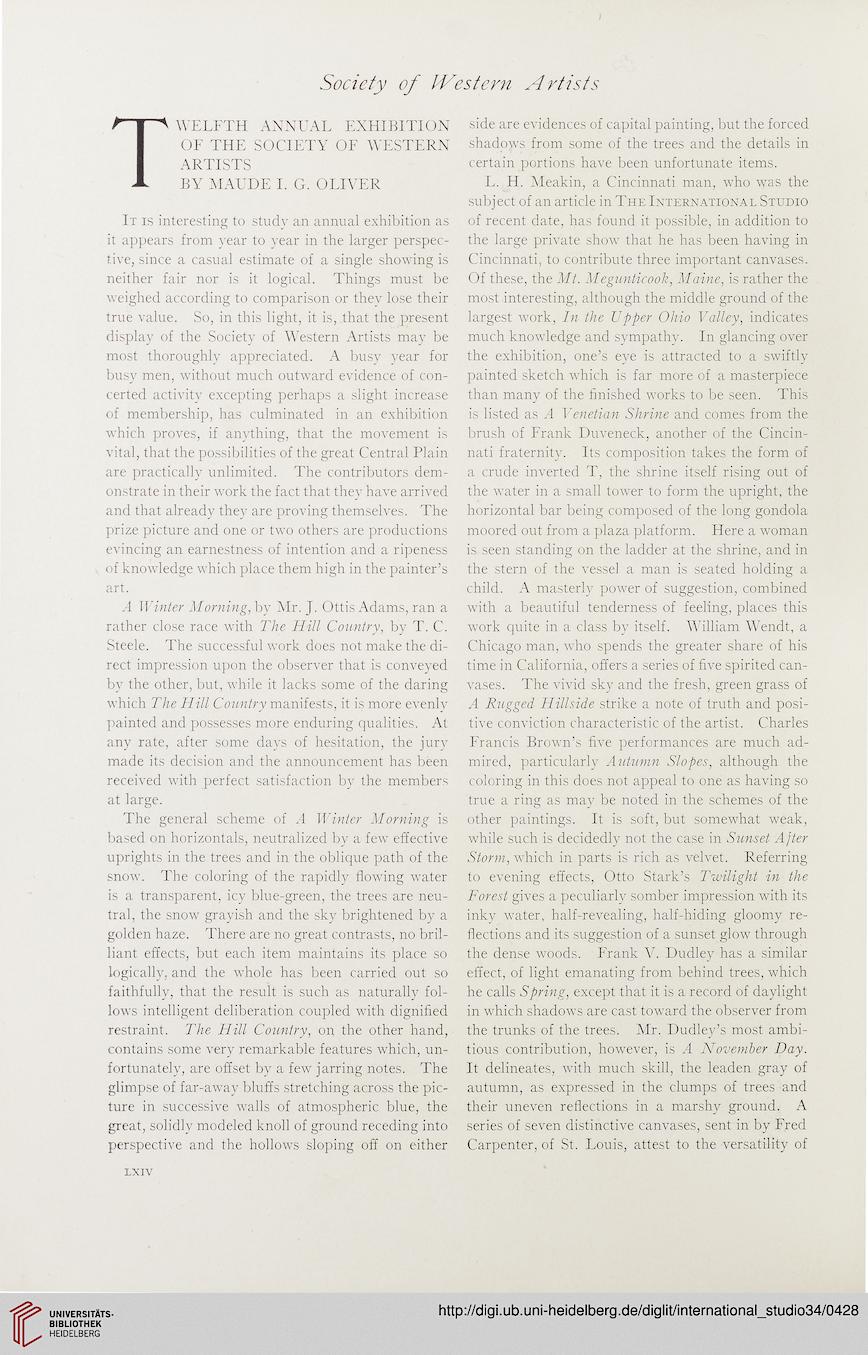 Twelfth annual exhibition
OF THE SOCIETY OF WESTERN
ARTISTS
BY MAUDE I. G. OLIVER
It is interesting to study an annual exhibition as
it appears from year to year in the larger perspec-
tive, since a casual estimate of a single showing is
neither fair nor is it logical. Things must be
weighed according to comparison or they lose their
true value. So, in this light, it is, that the present
display of the Society of Western Artists may be
most thoroughly appreciated. A busy year for
busy men, without much outward evidence of con-
certed activity excepting perhaps a slight increase
of membership, has culminated in an exhibition
which proves, if anything, that the movement is
vital, that the possibilities of the great Central Plain
are practically unlimited. The contributors dem-
onstrate in their work the fact that they have arrived
and that already they are proving themselves. The
prize picture and one or two others are productions
evincing an earnestness of intention and a ripeness
of knowledge which place them high in the painter’s
art.
A Winter Morning, by Mr. J. Ottis Adams, ran a
rather close race with The Hill Country, by T. C.
Steele. The successful work does not make the di-
rect impression upon the observer that is conveyed
by the other, but, while it lacks some of the daring
which The TIill Country manifests, it is more evenlv
painted and possesses more enduring qualities. At
any rate, after some days of hesitation, the jury
made its decision and the announcement has been
received with perfect satisfaction by the members
at large.
The general scheme of A Winter Morning is
based on horizontals, neutralized by a few effective
uprights in the trees and in the oblique path of the
snow. The coloring of the rapidly flowing water
is a transparent, icy blue-green, the trees are neu-
tral, the snow grayish and the sky brightened by a
golden haze. There are no great contrasts, no bril-
liant effects, but each item maintains its place so
logically, and the whole has been carried out so
faithfully, that the result is such as naturally fol-
lows intelligent deliberation coupled with dignified
restraint. The Hill Country, on the other hand,
contains some very remarkable features which, un-
fortunately, are offset by a few jarring notes. The
glimpse of far-away bluffs stretching across the pic-
ture in successive walls of atmospheric blue, the
great, solidly modeled knoll of ground receding into
perspective and the hollows sloping off on either

side are evidences of capital painting, but the forced
shadows from some of the trees and the details in
certain portions have been unfortunate items.
L. H. Meakin, a Cincinnati man, who was the
subject of an article in The International Studio
of recent date, has found it possible, in addition to
the large private show that he has been having in
Cincinnati, to contribute three important canvases.
Of these, the Mt. Megunticooh, Maine, is rather the
most interesting, although the middle ground of the
largest work, In the Upper Ohio Valley, indicates
much knowledge and sympathy. In glancing over
the exhibition, one’s eye is attracted to a swiftly
painted sketch which is far more of a masterpiece
than many of the finished works to be seen. This
is listed as A Venetian Shrine and comes from the
brush of Frank Duveneck, another of the Cincin-
nati fraternity. Its composition takes the form of
a crude inverted T, the shrine itself rising out of
the water in a small tower to form the upright, the
horizontal bar being composed of the long gondola
moored out from a plaza platform. Here a woman
is seen standing on the ladder at the shrine, and in
the stern of the vessel a man is seated holding a
child. A masterly power of suggestion, combined
with a beautiful tenderness of feeling, places this
work quite in a class by itself. William Wendt, a
Chicago man, who spends the greater share of his
time in California, offers a series of five spirited can-
vases. The vivid sky and the fresh, green grass of
A Rugged Hillside strike a note of truth and posi-
tive conviction characteristic of the artist. Charles
Francis Brown’s five performances are much ad-
mired, particularly Autumn Slopes, although the
coloring in this does not appeal to one as having so
true a ring as may be noted in the schemes of the
other paintings. It is soft, but somewhat weak,
while such is decidedly not the case in Sunset After
Storm, which in parts is rich as velvet. Referring
to evening effects, Otto Stark’s Twilight in the
Forest gives a peculiarly somber impression with its
inky water, half-revealing, half-hiding gloomy re-
flections and its suggestion of a sunset glow through
the dense woods. Frank A'. Dudley has a similar
effect, of light emanating from behind trees, which
he calls Spring, except that it is a record of daylight
in which shadows are cast toward the observer from
the trunks of the trees. Mr. Dudley’s most ambi-
tious contribution, however, is A November Day.
It delineates, with much skill, the leaden gray of
autumn, as expressed in the clumps of trees and
their uneven reflections in a marshy ground. A
series of seven distinctive canvases, sent in by Fred
Carpenter, of St. Louis, attest to the versatility of