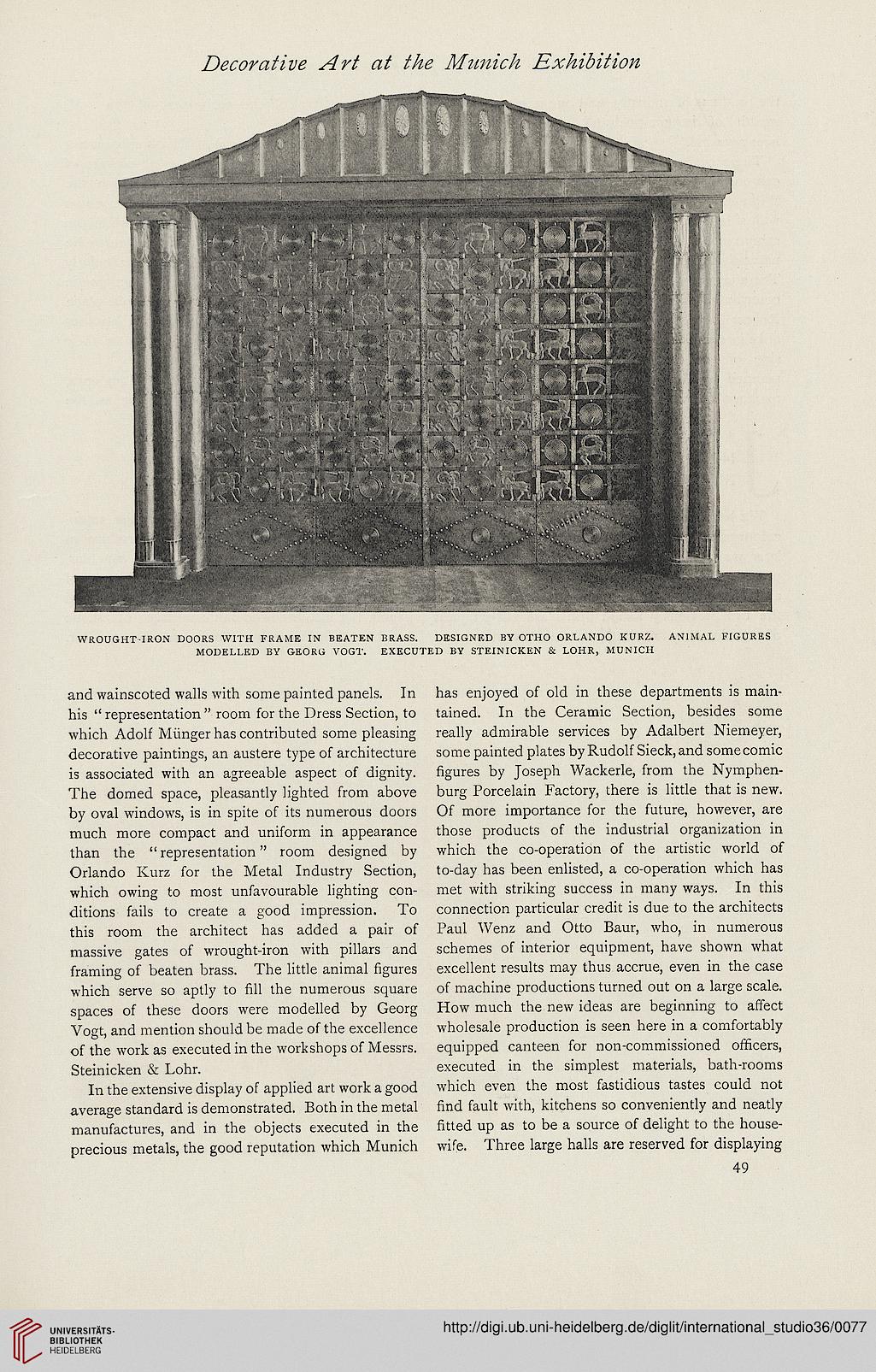 and wainscoted walts with some painted paneis. In
his " representation " room for the Dress Section, to
which Adoif Miinger has contributed some pieasing
decorative paintings, an austere type of architecture
is associated with an agreeabie aspect of dignity.
The domed space, pleasantiy lighted from above
by ova) windows, is in spite of its numerous doors
much more compact and uniform in appearance
than the " representation" room designed by
Orlando Kurz for the Metal Industry Section,
which owing to most unfavourabie lighting con-
ditions fails to create a good impression. To
this room the architect has added a pair of
massive gates of wrought-iron with pillars and
framing of beaten brass. The little animal hgures
which serve so aptly to hll the numerous square
spaces of these doors were modelled by Georg
Vogt, and mention should be made of the excellence
of the work as executed in the workshops of Messrs.
Steinicken & Lohr.
In the extensive display of applied art work a good
average standard is demonstrated. Both in the metal
manufactures, and in the objects executed in the
precious metals, the good reputation which Munich

has enjoyed of old in these departments is main-
tained. In the Ceramic Section, besides some
really admirable services by Adalbert Niemeyer,
some painted plates by Rudolf Sieck, and somecomic
hgures by Joseph Wackerle, from the Nymphen-
burg Porcelain Factory, there is little that is new.
Of more importance for the future, however, are
those products of the industrial organization in
which the co-operation of the artistic world of
to-day has been enlisted, a co-operation which has
met with striking success in many ways. In this
connection particular credit is due to the architects
Paul Wenz and Otto Baur, who, in numerous
schemes of interior equipment, have shown what
excellent results may thus accrue, even in the case
of machine productions turned out on a large scale.
How much the new ideas are beginning to affect
wholesale production is seen here in a comfortably
equipped canteen for non-commissioned ofhcers,
executed in the simplest materials, bath-rooms
which even the most fastidious tastes could not
hnd fault with, kitchens so conveniently and neatly
htted up as to be a source of delight to the house-
wife. Three large halls are reserved for displaying
49