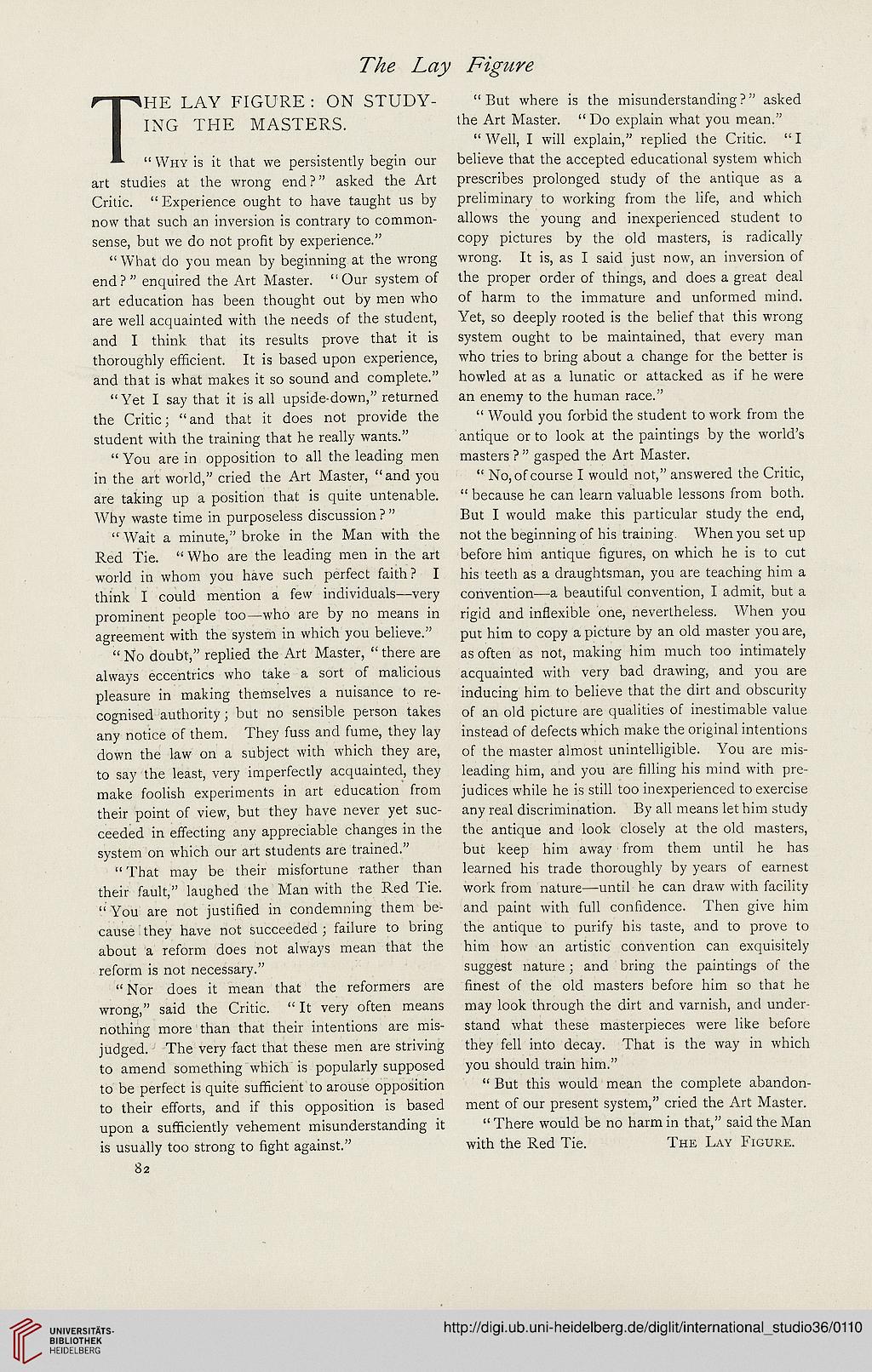 r-T-SIIE LAY FIGURE : ON STUDY-
ING THE MASTERS.
H- " WnY is it that we persistently begin our
art studies at the wrong end?" asked the Art
Critic. " Experience ought to have taught us by
now that such an inversion is contrary to common-
sense, but we do not proht by experience."
" What do you mean by beginning at the wrong
end?" enquired the Art Master. "Our system of
art education has been thought out by men who
are weli acquainted with the needs of the student,
and I think that its resuits prove that it is
thoroughiy efficient. It is based upon experience,
and that is what makes it so sound and compiete."
" Yet I say that it is aii upside-down," returned
the Critic; "and that it does not provide the
student with the training that he reaily wants."
" You are in opposition to ail the leading men
in the art world," cried the Art Master, "and you
are taking up a position that is quite untenabie.
Why waste time in purposeiess discussion ? "
" Wait a minute," broke in the Man with the
Red Tie. "Who are the ieading men in the art
worid in whom you have such perfect faith? I
think I couid mention a few individuais—very
prominent people too—who are by no means in
agreement with the system in which you beiieve."
" No doubt," repiied the Art Master, " there are
always eccentrics who take a sort of malicious
pieasure in making themseives a nuisance to re-
cognised authority; but no sensible person takes
any notice of them. They fuss and fume, they iay
down the iaw on a subject with which they are,
to say the least, very imperfectiy acquainted, they
make fooiish experiments in art education from
their point of view, but they have never yet suc-
ceeded in effecting any appreciable changes in the
system on which our art students are trained."
" That may be their misfortune rather than
their fauit," iaughed the Man with the Red Tie.
" You are not justifred in condemning them be-
cause they have not succeeded ; failure to bring
about a reform does not aiways mean that the
reform is not necessary."
"Nor does it mean that the reformers are
wrong," said the Critic. " It very often means
nothing more than that their intentions are mis-
judged. The very fact that these men are striving
to amend something which is popuiarly supposed
to be perfect is quite sufhcient to arouse opposition
to their efforts, and if this opposition is based
upon a sufHciently vehement misunderstanding it
is usualiy too strong to hght against."
82

" But where is the misunderstanding ?" asked
the Art Master. "Do explain what you mean."
" Well, I will explain," replied the Critic. " I
believe that the accepted educational system which
prescribes prolonged study of the antique as a
preliminary to working from the life, and which
allows the young and inexperienced student to
copy pictures by the old masters, is radically
wrong. It is, as I said just now, an inversion of
the proper order of things, and does a great deal
of harm to the immature and unformed mind.
Yet, so deeply rooted is the belief that this wrong
system ought to be maintained, that every man
who tries to bring about a change for the better is
howled at as a lunatic or attacked as if he were
an enemy to the human race."
" Would you forbid the student to work from the
antique or to look at the paintings by the world's
masters ? " gasped the Art Master.
" No,ofcourse I would not," answered the Critic,
" because he can learn valuable lessons from both.
But I would make this particular study the end,
not the beginning of his training When you set up
before him antique hgures, on which he is to cut
his teeth as a draughtsman, you are teaching him a
convention—a beautiful convention, I admit, but a
rigid and inHexible one, nevertheless. When you
put him to copy a picture by an old master you are,
as often as not, making him much too intimately
acquainted with very bad drawing, and you are
inducing him to believe that the dirt and obscurity
of an old picture are qualities of inestimable value
instead of defects which rnake the original intentions
of the master almost unintelligible. You are mis-
leading him, and you are hlling his mind with pre-
judices while he is still too inexperienced to exercise
any real discrimination. By all means let him study
the antique and look closely at the old masters,
but keep him away from them until he has
learned his trade thoroughly by years of earnest
work from nature—until he can draw with facility
and paint with full conhdence. Then give him
the antique to purify his taste, and to prove to
him how an artistic convention can exquisitely
suggest nature; and bring the paintings of the
hnest of the old masters before him so that he
may look through the dirt and varnish, and under-
stand what these masterpieces were like before
they fell into decay. That is the way in which
you should train him."
" But this would mean the complete abandon-
ment of our present system," cried the Art Master.
" There would be no harm in that," said the Man
with the Red Tie. THE LAY FiGURE.