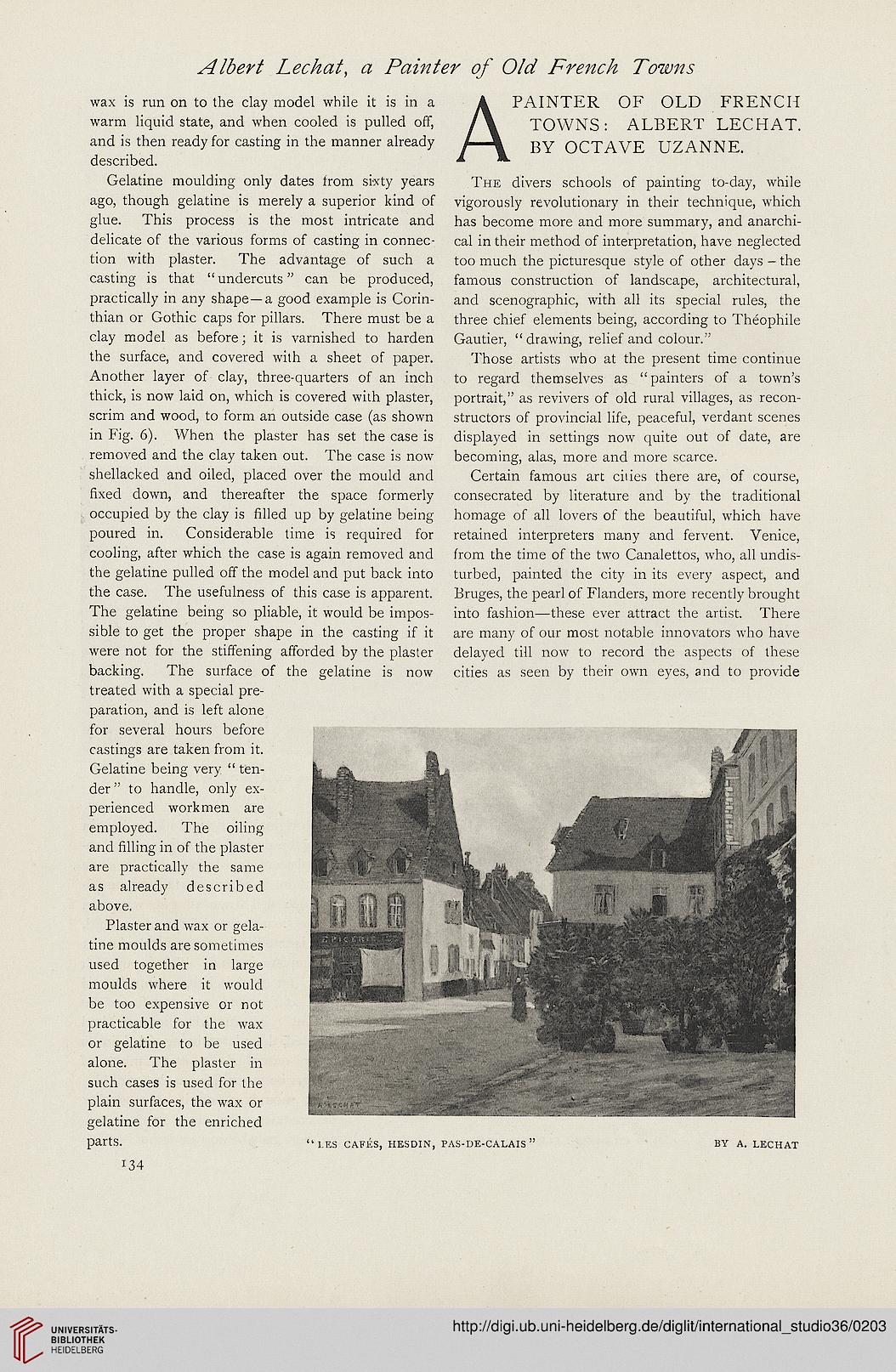 wax is run on to the clay model while it is in a
warm liquid state, and when cooled is pulled oH*,
and is then ready for casting in the manner already
described.
Gelatine moulding only dates trom sixty years
ago, though gelatine is merely a superior kind of
glue. This process is the most intricate and
delicate of the various forms of casting in connec-
tion with plaster. The advantage of such a
casting is that "undercuts" can he produced,
practically in any shape—a good example is Corin-
thian or Gothic caps for pillars. There must be a
clay model as before; it is varnished to harden
the surface, and covered with a sheet of paper.
Another layer of c!ay, three-quarters of an inch
thick, is now laid on, which is covered with plaster,
scrim and wood, to form an outside case (as shown
in Fig. 6). When the plaster has set the case is
removed and the clay taken out. The case is now
shellacked and oiled, placed over the mould and
hxed down, and thereafter the space formerly
occupied by the clay is hlled up by gelatine being
poured in. Considerable time is required for
cooling, after which the case is again removed and
the gelatine pulled off the model and put back into
the case. The usefulness of this case is apparent.
The gelatine being so pliable, it would be impos-
sible to get the proper shape in the casting if it
were not for the stiffening aHorded by the plaster
backing. The surface of the gelatine is now
treated with a special pre-
paration, and is left alone
for several hours before
castings are taken from it.
Gelatine being very " ten-
der" to handle, only ex-
perienced workmen are
employed. The oiling
and hlling in of the plaster
are practically the same
as already described
above.
Plaster and wax or gela-
tine moulds are sometimes
used together in large
moulds where it would
be too expensive or not
practicable for the wax
or gelatine to be used
alone. The plaster in
such cases is used for the
plain surfaces, the wax or
gelatine for the enriched
parts.

A PAINTER OF OLD FRENCII
/\ TOWNS: ALBERT LECHAT.
\ BY OCTAVE UZANNE.
TnE divers schools of painting to-day, while
vigorously revolutionary in their technique, which
has become more and more summary, and anarchi-
cal in their method of interpretation, have neglected
too much the picturesque style of other days - the
famous construction of landscape, architectural,
and scenographic, with all its special rules, the
three chief elements being, according to Theophile
Gautier, " drawing, relief and colour."
Those artists who at the present time continue
to regard themselves as "painters of a town's
portrait," as revivers of old rural villages, as recon-
structors of provincial life, peaceful, verdant scenes
displayed in settings now quite out of date, are
becoming, alas, more and more scarce.
Certain famous art cities there are, of course,
consecrated by literature and by the traditional
homage of all lovers of the beautiful, which have
retained interpreters many and fervent. Venice,
from the time of the two Canalettos, who, all undis-
turbed, painted the city in its every aspect, and
Bruges, the pearl of Flanders, more recently brought
into fashion—these ever attract the artist. There
are many of our most notable innovators who have
delayed till now to record the aspects of these
cities as seen by their own eyes, and to provide