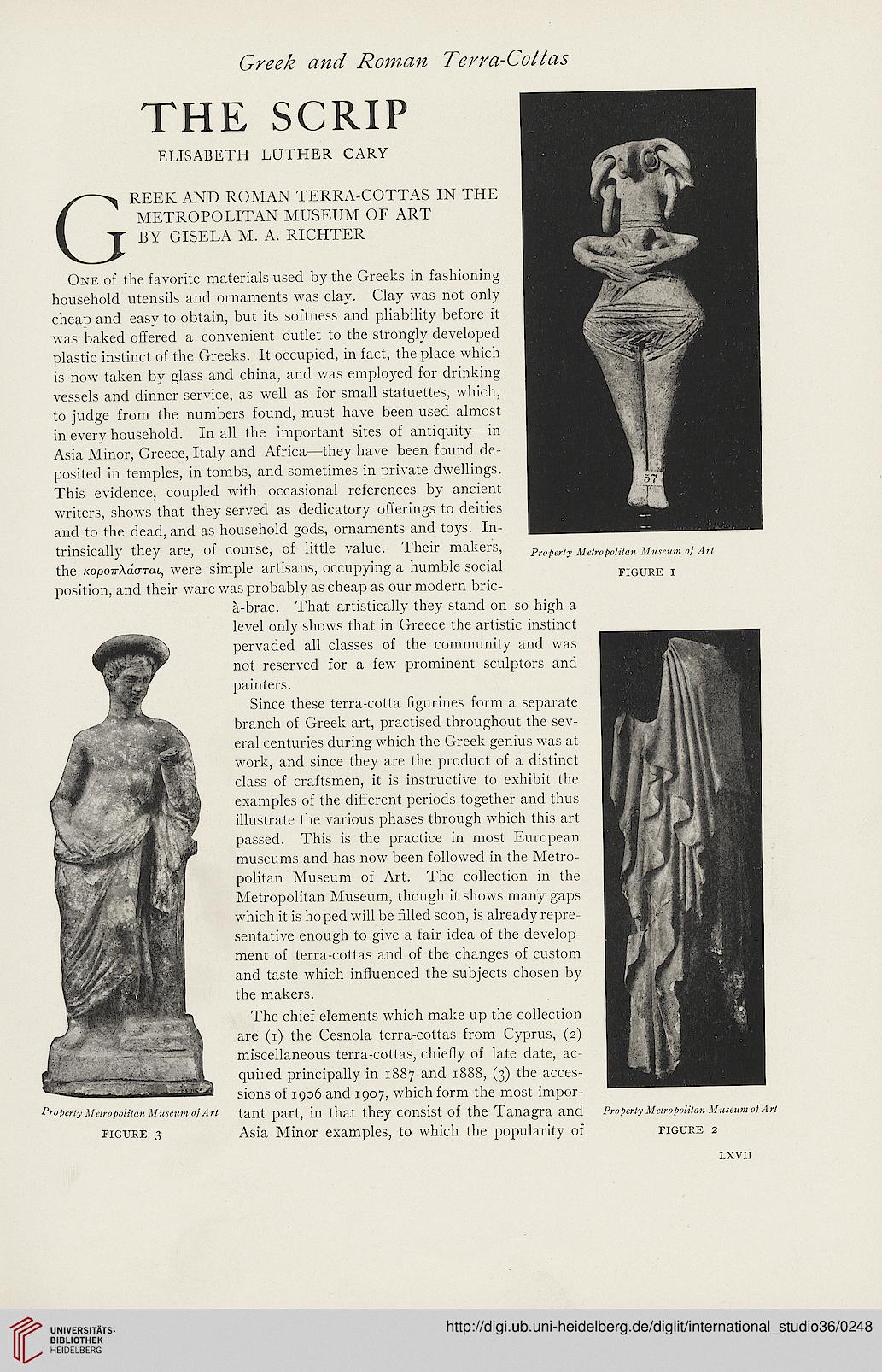 REEK AND ROMAN TERRA-COTTAS IN THE
METROPOLITAN MUSEUM OF ART
BY GISELA M. A. RICHTER

ONE of the favorite materials used by the Greeks in fashioning
household utensils and ornaments was clay. Clay was not only
cheap and easy to obtain, but its softness and pliability before it
was baked oSered a convenient outlet to the strongly developed
plastic instinct of the Greeks. It occupied, in fact, the place which
is now taken by glass and china, and was employed for drinking
vessels and dinner service, as well as for small statuettes, which,
to judge from the numbers found, must have been used almost
in every household. In all the important sites of antiquity—in
Asia Minor, Greece, Italy and Africa—they have been found de-
posited in temples, in tombs, and sometimes in private dwellings.
This evidence, coupled with occasional references by ancient
writers, shows that they served as dedicatory offerings to deities
and to the dead, and as household gods, ornaments and toys. In-
trinsically they are, of course, of little value. Their makers,
the Kopon-A.do-Tctt, were simple artisans, occupying a humble social
position, and their ware was probably as cheap as our modern bric-
a-brac. That artistically they stand on so high a
level only shows that in Greece the artistic instinct
pervaded all classes of the community and was
not reserved for a few prominent sculptors and
painters.
Since these terra-cotta figurines form a separate
branch of Greek art, practised throughout the sev-
eral centuries during which the Greek genius was at
work, and since they are the product of a distinct
class of craftsmen, it is instructive to exhibit the
examples of the different periods together and thus
illustrate the various phases through which this art
passed. This is the practice in most European
museums and has now been followed in the Metro-
politan Museum of Art. The collection in the
Metropolitan Museum, though it shows many gaps
which it is hoped will be fiHed soon, is already repre-
sentative enough to give a fair idea of the develop-
ment of terra-cottas and of the changes of custom
and taste which induenced the subjects chosen by
the makers.
The chief elements which make up the collection
are (i) the Cesnola terra-cottas from Cyprus, (2)
miscellaneous terra-cottas, chieHy of late date, ac-
quited principally in 1887 and 1888, (3) the acces-
sions of 1906 and 1907, which form the most impor-
tant part, in that they consist of the Tanagra and
FiGURE 3 Asia Minor examples, to which the popularity of