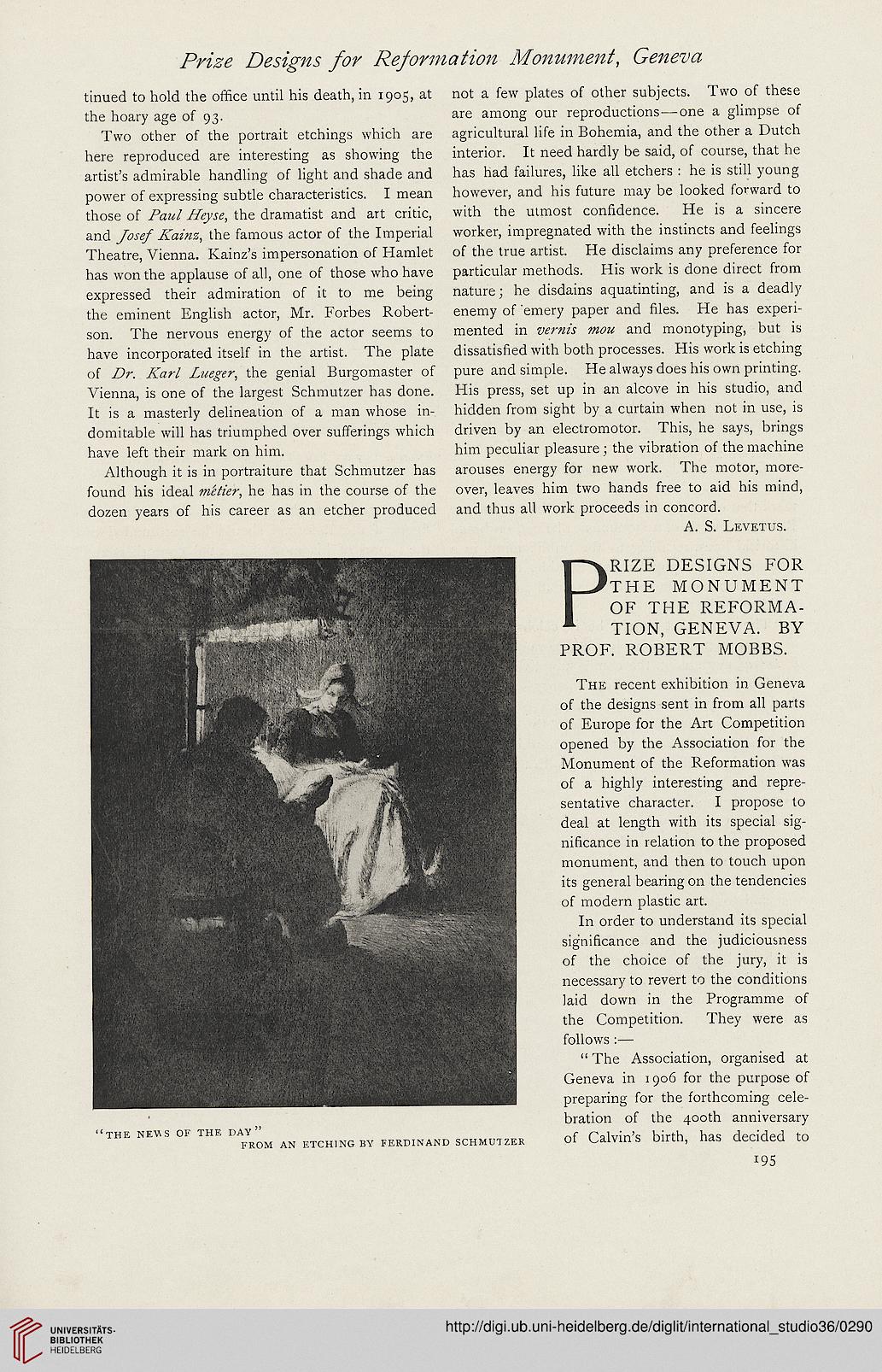 tinued to hold the odice untii his death, in 1905, at
the hoary age of 93.
Two other of the portrait etchings which are
here reproduced are interesting as showing the
artist's admirabie handling of light and shade and
power of expressing subtie characteristics. I mean
those of Aw/ the dramatist and art critic,
and the famous actor of the Imperial
Theatre, Vienna. Kainz's impersonation of Hamiet
has won the applause of aH, one of those who have
expressed their admiration of it to me being
the eminent English actor, Mr. Forbes Robert-
son. The nervous energy of the actor seems to
have incorporated itself in the artist. The plate
of Zb*. AI27-/ the geniai Burgomaster of
Vienna, is one of the largest Schmutzer has done.
It is a masterly delineation of a man whose in-
domitable will has triumphed over sufferings which
have left their mark on him.
Although it is in portraiture that Schmutzer has
found his ideal 77^/Kt7*, he has in the course of the
dozen years of his career as an etcher produced

not a few plates of other subjects. Two of these
are arnong our reproductions—one a glimpse of
agricultural life in Bohemia, and the other a Dutch
interior. It need hardly be said, of course, that he
has had failures, like all etchers : he is still young
however, and his future may be looked forward to
with the utmost conhdence. He is a sincere
worker, impregnated with the instincts and feelings
of the true artist. He disclaims any preference for
particular methods. His work is done direct from
nature; he disdains aquatinting, and is a deadly
enemy of emery paper and files. He has experi-
mented in W7*%M 7777777 and monotyping, but is
dissatished with both processes. His work is etching
pure and simpie. He always does his own printing.
His press, set up in an alcove in his studio, and
hidden from sight by a curtain when not in use, is
driven by an electromotor. This, he says, brings
him peculiar pieasure ; the vibration of the machine
arouses energy for new work. The motor, more-
over, leaves him two hands free to aid his mind,
and thus all work proceeds in concord.
A. S. LEVETUS.


"THE NEWS OF THE DAY"
FROM AN ETCHtNG BY FERDINAND SCHMUTZER

T"*^RIZE DESIGNS FOR
LFTHE MONUMENT
OF THE REFORMA-
* TION, GENEVA. BY
PROF. ROBERT MOBBS.
THE recent exhibition in Geneva
of the designs sent in from all parts
of Europe for the Art Competition
opened by the Association for the
Monument of the Reformation was
of a highly interesting and repre-
sentative character. I propose to
deal at length with its special sig-
nihcance in relation to the proposed
monument, and then to touch upon
its general bearing on the tendencies
of modern plastic art.
In order to understand its special
signihcance and the judiciousness
of the choice of the jury, it is
necessary to revert to the conditions
laid down in the Programme of
the Competition. They were as
follows :—
" The Association, organised at
Geneva in < 906 for the purpose of
preparing for the forthcoming cele-
bration of the 400th anniversary
of Calvin's birth, has decided to