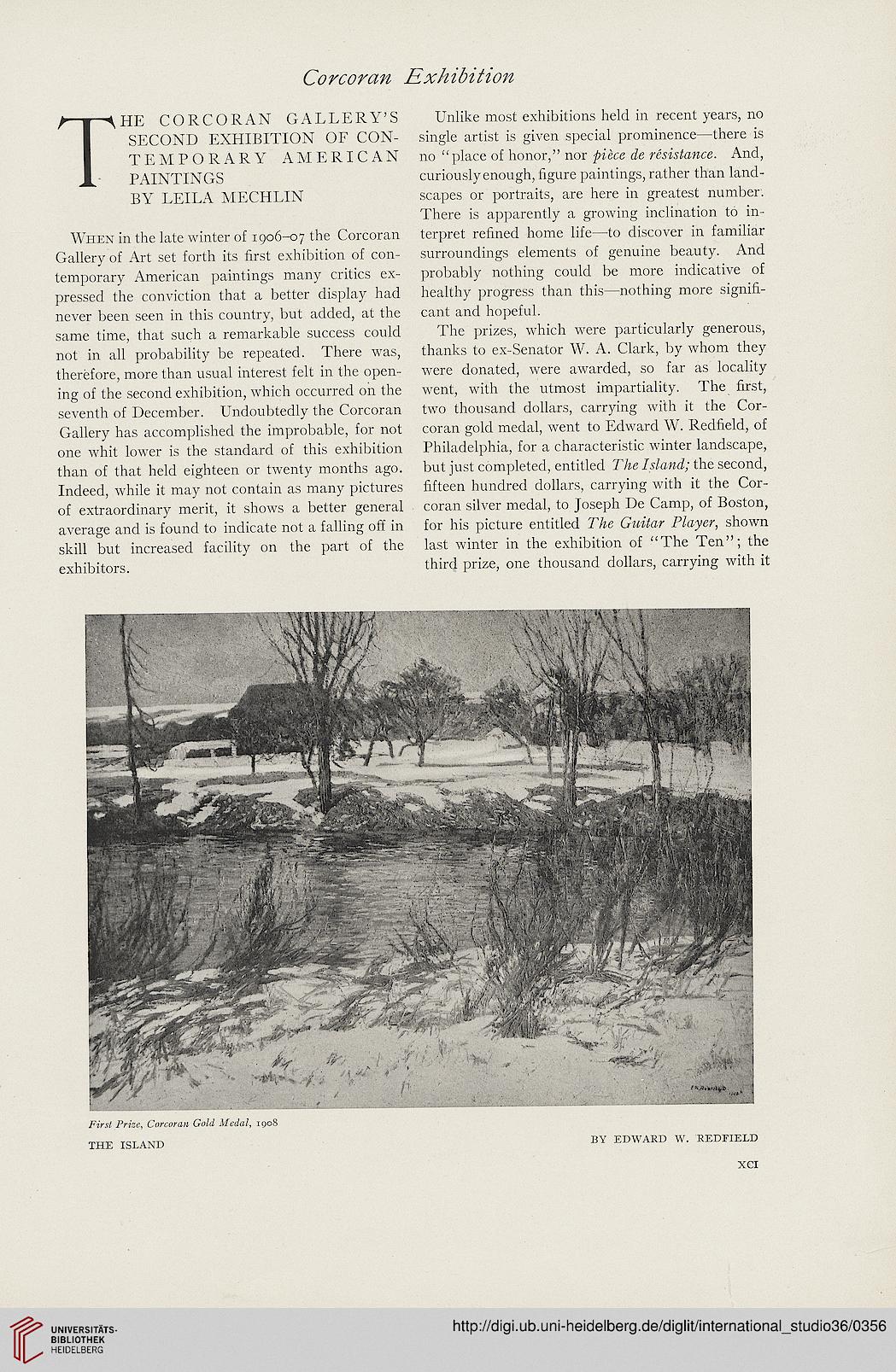 /-n ^HE CORCORAN GALLERY'S
SECOND EXHIRITION OF CON-
TEMPORARY AMERICAN
PAINTINGS
BY LEILA MECHLIN
WHEN in the iate winter of 1906-07 the Corcoran
Galiery of Art set forth its first exhibition of con-
temporary American paintings many critics ex-
pressed the conviction that a better dispiay had
never been seen in this country, but added, at the
same time, that such a remarkabie success could
not in ail probabiiity be repeated. There was,
therefore, more than usual interest felt in the open-
ing of the second exhibition, which occurred on the
seventh of December. Undoubtedly the Corcoran
Gallery has accomplished the improbabie, for not
one whit lower is the standard of this exhibition
than of that held eighteen or twenty months ago.
Indeed, while it may not contain as many pictures
of extraordinary merit, it shows a better general
average and is found to indicate not a falling off in
skill but increased faciiity on the part of the
exhibitors.

Uniike most exhibitions heid in recent years, no
single artist is given special prominence—there is
no "place of honor," nor de r&SMfawce. And,
curiouslyenough, figure paintings, rather than land-
scapes or portraits, are here in greatest number.
There is apparently a growing inclination to in-
terpret refined home life—to discover in familiar
surroundings elements of genuine beauty. And
probably nothing could be more indicative of
healthy progress than this—nothing more signih-
cant and hopeful.
The prizes, which were particularly generous,
thanks to ex-Senator W. A. Clark, by whom they
were donated, were awarded, so far as locality
went, with the utmost impartiality. The hrst,
two thousand dollars, carrying with it the Cor-
coran gold medal, went to Edward W. Redfield, of
Philadelphia, for a characteristic winter landscape,
but just completed, entitled TAe the second,
fifteen hundred dollars, carrying with it the Cor-
coran silver medal, to Joseph De Camp, of Boston,
for his picture entitled TAe Pfgyer, shown
last winter in the exhibition of "The Ten"; the
third prize, one thousand dollars, carrying with it