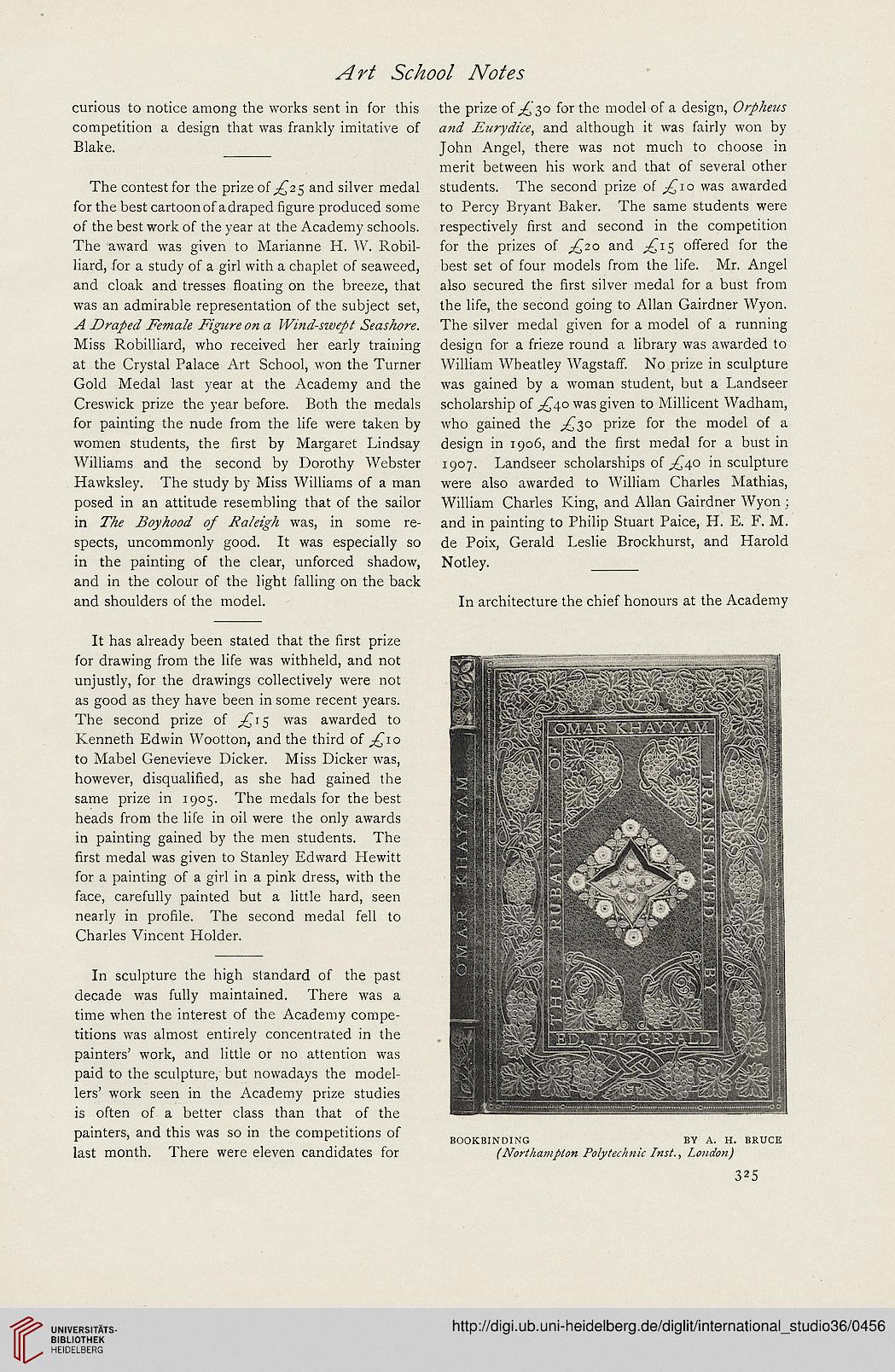 curious to notice among the works sent in for this
competition a design that was frankly imitative of
Biake.

The contest for the prize of ^*25 and siiver medai
for the best cartoonof adraped figure produced some
of the best work of the year at the Academy schoois.
The award was given to Marianne H. W. Robil-
iiard, for a study of a giri with a chapiet of seaweed,
and cioak and tresses Hoating on the breeze, that
was an admirable representation of the subject set,
2^ ZM7M/.S ZijM7T? (772 <3 IT272(f-.fW<yV &(!^(77^.
Miss Robiiiiard, who received her eariy training
at the Crystai Paiace Art Schooi, won the Turner
Goid Medal last year at the Academy and the
Creswick prize the year before. Both the medals
for painting the nude from the life were taken by
women students, the hrst by Margaret Lindsay
Williams and the second by Dorothy Webster
Hawksley. The study by Miss Williams of a man
posed in an attitude resembling that of the sailor
in ZXe j%7y^(7<7</ 0/* was, in some re-
spects, uncommonly good. It was especially so
in the painting of the clear, unforced shadow,
and in the colour of the light falling on the back
and shoulders of the model.

It has already been stated that the frrst prize
for drawing from the life was withheld, and not
unjustly, for the drawings collectively were not
as good as they have been in some recent years.
The second prize of 15 was awarded to
Kenneth Edwin Wootton, and the third of
to Mabel Genevieve Dicker. Miss Dicker was,
however, disqualihed, as she had gained the
same prize in 1905. The medals for the best
heads from the life in oil were the only awards
in painting gained by the men students. The
first medal was given to Stanley Edward Hewitt
for a painting of a girl in a pink dress, with the
face, carefully painted but a little hard, seen
nearly in prohle. The second medal fell to
Charles Vmcent Holder.

In sculpture the high standard of the past
decade was fully maintained. There was a
time when the interest of the Academy compe-
titions was almost entirely concentrated in the
painters' work, and little or no attention was
paid to the sculpture, but nowadays the model-
lers' work seen in the Academy prize studies
is often of a better class than that of the
painters, and this was so in the competitions of
last month. There were eleven candidates for

the prize of ^'30 for the model of a design, (VA%f22.r
<i72<f ZirT-ya'i'rc, and although it was fairly won by
John Angel, there was not much to choose in
merit between his work and that of several other
students. The second prize of ^10 was awarded
to Percy Bryant Baker. The same students were
respectively hrst and second in the competition
for the prizes of ^20 and ^ig offered for the
best set of four models from the life. Mr. Angel
also secured the hrst silver medal for a bust from
the life, the second going to AHan Gairdner Wyon.
The silver medal given for a model of a running
design for a frieze round a library was awarded to
William Wheatley Wagstaff. No prize in sculpture
was gained by a woman student, but a Landseer
scholarship of ^40 was given to Millicent Wadham,
who gained the ^30 prize for the model of a
design in 1906, and the first medal for a bust in
1907. Landseer scholarshipsof^40 insculpture
were also awarded to William Charles Mathias,
William Charles King, and Allan Gairdner Wyon ;
and in painting to Philip Stuart Paice, H. E. F. M.
de Poix, Gerald Leslie Brockhurst, and Harold
Notley. _
In architecture the chief honours at the Academy