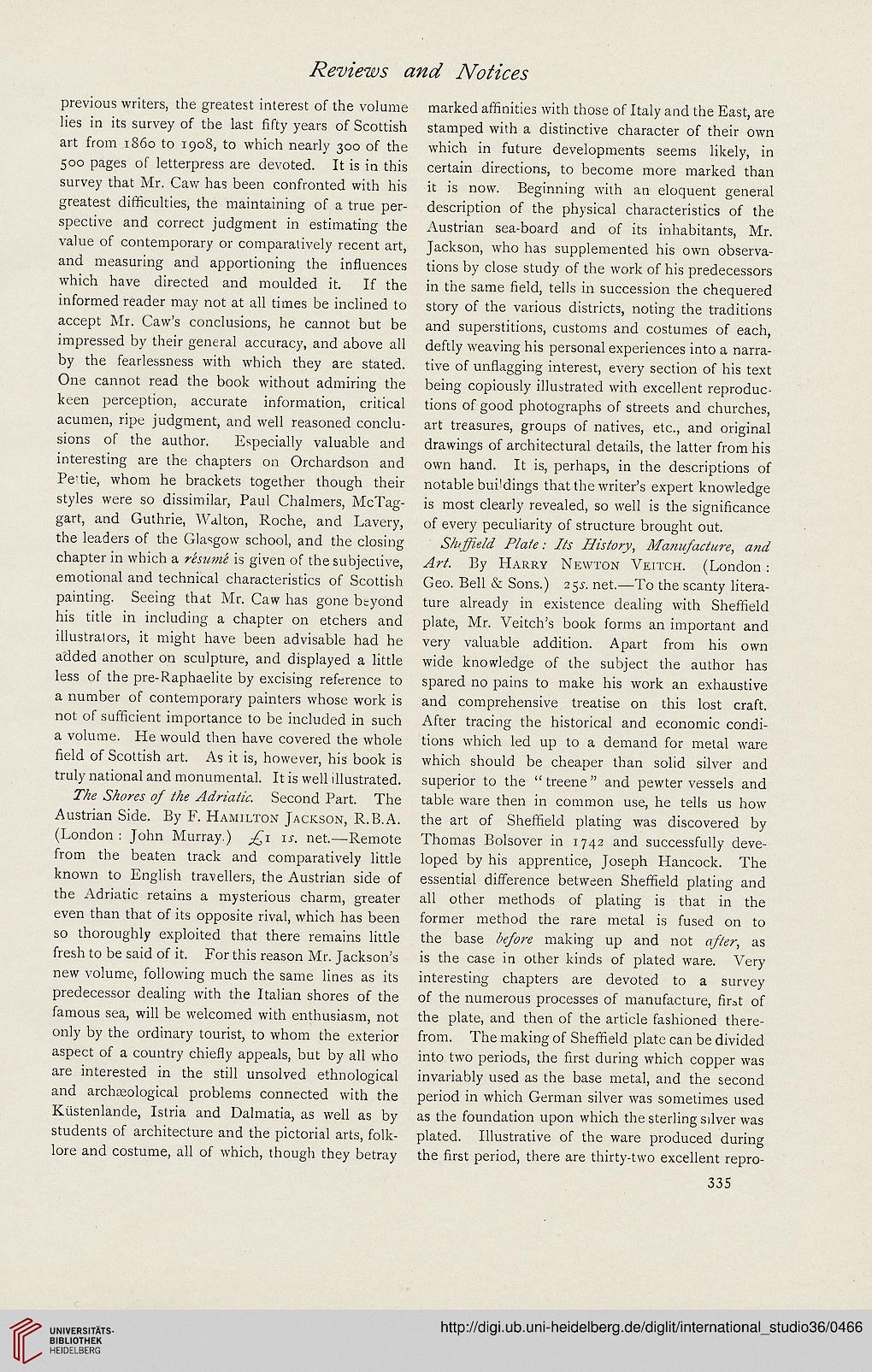 previous writers, the greatest interest of the volume
iies in its survey of the iast fifty years of Scottish
art from 1860 to 1908, to which nearly 300 of the
500 pages of ietterpress are devoted. It is in this
survey that Mr. Caw has been confronted with his
greatest difhcuities, the maintaining of a true per-
spective and correct judgment in estimating the
vaiue of contemporary or comparativeiy recent art,
and measuring and apportioning the inftuences
which have directed and moulded it. If the
informed reader may not at ail times be inclined to
accept Mr. Caw's conciusions, he cannot but be
impressed by their generai accuracy, and above ail
by the fearlessness with which they are stated.
One cannot read the book without admiring the
keen perception, accurate information, criticai
acumen, ripe judgment, and weH reasoned conciu-
sions of the author. EspeciaHy valuable and
interesting are the chapters on Orchardson and
Pe'tie, whom he brackets together though their
styies were so dissimiiar, Paut Chalmers, McTag-
gart, and Guthrie, Walton, Roche, and Lavery,
the ieaders of the Giasgow schooi, and the ciosing
chapter in which a 7-<&M77;<? is given of the subjective,
emotional and technical characteristics of Scottish
painting. Seeing that Mr. Caw has gone bsyond
his titie in inciuding a chapter on etchers and
iiiustrators, it might have been advisabie had he
added another on scuipture, and dispiayed a iittie
iess of the pre-Raphaelite by excising reference to
a number of contemporary painters whose work is
not of sufHcient importance to be iticiuded in such
a volume. He wouid then have covered the whoie
Held of Scottish art. As it is, however, his book is
truly national and monumentai. It is weil iliustrated.
<Sv%c7-M Second Part. The
Austrian Side. By F. HAMiLTON JACKSON, R.B.A.
(London : John Murray.) ^ji ir. net.—Remote
from the beaten track and comparativeiy little
known to Engiish traveliers, the Austrian side of
the Adriatic retains a mysterious charm, greater
even than that of its opposite rival, which has been
so thoroughly exploited that there remains littie
fresh to be said of it. For this reason Mr. Jackson's
new voiume, foliowing much the same iines as its
predecessor deaiing with the Itaiian shores of the
famous sea, wiii be weicomed with enthusiasm, not
oniy by the ordinary tourist, to whom the exterior
aspect of a country chieHy appeais, but by aii who
are interested in the stiil unsolved ethnologicai
and archmological problems connected with the
Kusteniande, Istria and Dalmatia, as weii as by
students of architecture and the pictoriai arts, fotk-
lore and costume, ali of which, though they betray

marked affinities with those of Italy and the East, are
stamped with a distinctive character of their own
which in future deveiopments seems iikely, in
certain directions, to become more marked than
it is now. Beginning with an eloquent generai
description of the physica! characteristics of the
Austrian sea-board and of its inhabitants, Mr.
Jackson, who has supplemented his own observa-
tions by ciose study of the work of his predecessors
in the same fieid, teHs in succession the chequered
story of the various districts, noting the traditions
and superstitions, customs and costumes of each,
deftly weaving his personal experiences into a narra-
tive of unHagging interest, every section of his text
being coptously iHustrated with exceiient reproduc-
tions of good photographs of streets and churches,
art treasures, groups of natives, etc., and original
drawings of architectural detaiis, the latter from his
own hand. It is, perhaps, in the descriptions of
notabie buHdings that the writer's expert knowledge
is most cleariy reveaied, so weil is the significance
of every pecuiiarity of structure brought out.
7A AfAA77y, <277//
^47-A By HARRY NEWTON VEiTCH. (London :
Geo. Beli & Sons.) 2gj. net.—To the scanty litera-
ture already in existence deaiing with ShefHeld
plate, Mr. Veitch's book forms an important and
very vaiuable addition. Apart from his own
wide knowledge of the subject the author has
spared no pains to make his work an exhaustive
and comprehensive treatise on this lost craft.
After tracing the historicai and economic condi-
tions which led up to a demand for metai ware
which should be cheaper than solid silver and
superior to the " treene" and pewter vesseis and
table ware then in common use, he tells us how
the art of ShetHeld piating was discovered by
Thomas Bolsover in 1742 and successfuily deve-
loped by his apprentice, Joseph Hancock. The
essential difference between ShefHeld plating and
all other methods of plating is that in the
former method the rare metal is fused on to
the base &/&712 making up and not u/%7*, as
is the case in other kinds of plated ware. Very
interesting chapters are devoted to a survey
of the numerous processes of manufacture, Hr^t of
the plate, and then of the article fashioned there-
from. The making of ShefHeld plate can be divided
into two periods, the Hrst during which copper was
invariably used as the base metal, and the second
period in which German silver was sometimes used
as the foundation upon which the sterling sdver was
plated. IHustrative of the ware produced during
the Hrst period, there are thirty-two excelient repro-
335