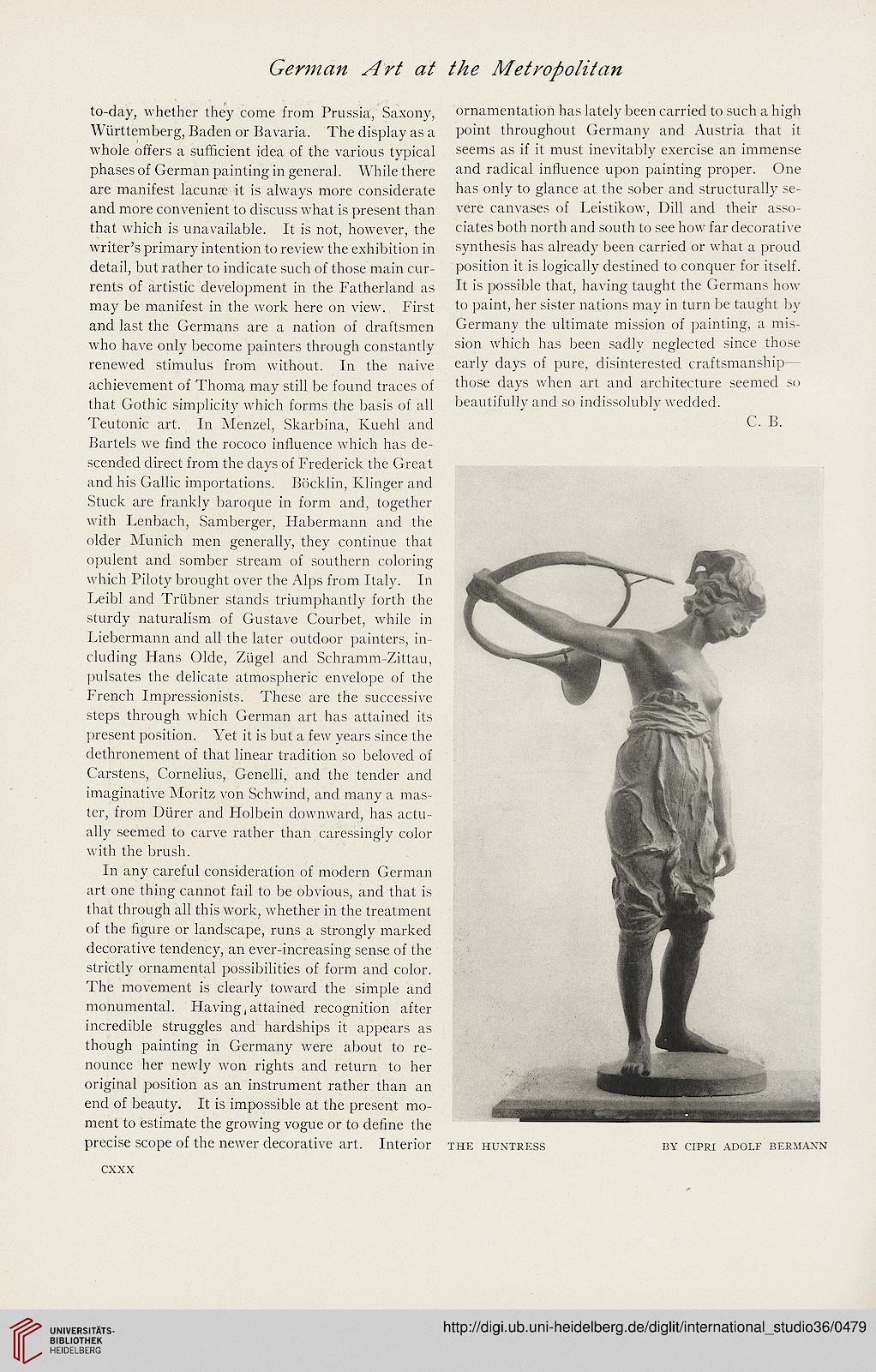 to-day, whether they come from Prussia, Saxony,
Wiirttemberg, Baden or Bavaria. The dispiay as a
whoie offers a sudicient idea of the various typicai
phases of German painting in general. Whiie there
are manifest iacunas it is always more considerate
and more convenient to discuss what is present than
that which is unavaiiabie. It is not, however, the
writer's primary intention to review the exhibition in
detail, but rather to indicate such of those main cur-
rents of artistic deveiopment in the Fatheriand as
may be manifest in the work here on view. First
and iast the Germans are a nation of draftsmen
who have only become painters through constantiy
renewed stimulus from without. In the naive
achievement of Thoma may still be found traces of
that Gothic simplicity which forms the basis of all
Teutonic art. In Menzel, Skarbina, Kuehl and
Bartels we hnd the rococo induence which has de-
scended direct from the days of Frederick the Great
and his Gallic importations. Bocklin, Klinger and
Stuck are frankly baroque in form and, together
with Lenbach, Samberger, Habermann and the
older Munich men generally, they continue that
opulent and somber stream of southern coloring
which Piloty brought over the Alps from Italy. In
Leibl and Trilbner stands triumphantly forth the
sturdy naturalism of Gustave Courbet, while in
Liebermann and all the later outdoor painters, in-
cluding Hans Olde, Zugel and Schramm-Zittau,
pulsates the delicate atmospheric envelope of the
French Impressionists. These are the successive
steps through which German art has attained its
present position. Yet it is but a few years since the
dethronement of that linear tradition so beloved of
Carstens, Cornelius, Genelli, and the tender and
imaginative Moritz von Schwind, and many a mas-
ter, from Durer and Holbein downward, has actu-
ally seemed to carve rather than caressingly color
with the brush.
In any careful consideration of modern German
art one thing cannot fail to be obvious, and that is
tliat through all this work, whether in the treatment
of the figure or landscape, runs a strongly marked
decorative tendency, an ever-increasing sense of the
strictly ornamental possibilities of form and color.
The movement is clearly toward the simple and
monumental. Having,attained recognition after
incredible struggles and hardships it appears as
though painting in Germany were about to re-
nounce her newly won rights and return to her
original position as an instrument rather than an
end of beauty. It is impossible at the present mo-
ment to estimate the growing vogue or to dehne the
precise scope of the newer decorative art. Interior

ornamentation has lately been carried to such a high
point throughout Germany and Austria that it
seems as if it must inevitably exercise an immense
and radical induence upon painting proper. One
has only to glance at the sober and structurally se-
vere canvases of Leistikow, Dill and their asso-
ciates both north and south to see how far decorative
synthesis has already been carried or what a proud
position it is logically destined to conquer for itself.
It is possible that, having taught the Germans how
to paint, her sister nations may in turn be taught by
Germany the ultimate mission of painting, a mis-
sion which has been sadlv neglected since those
early days of pure, disinterested craftsmanship—
those days when art and architecture seemed so
beautifuliy and so indissolubly wedded.
C. B.


THE HUNTRESS BY CIPRI ADOLF BERMANN