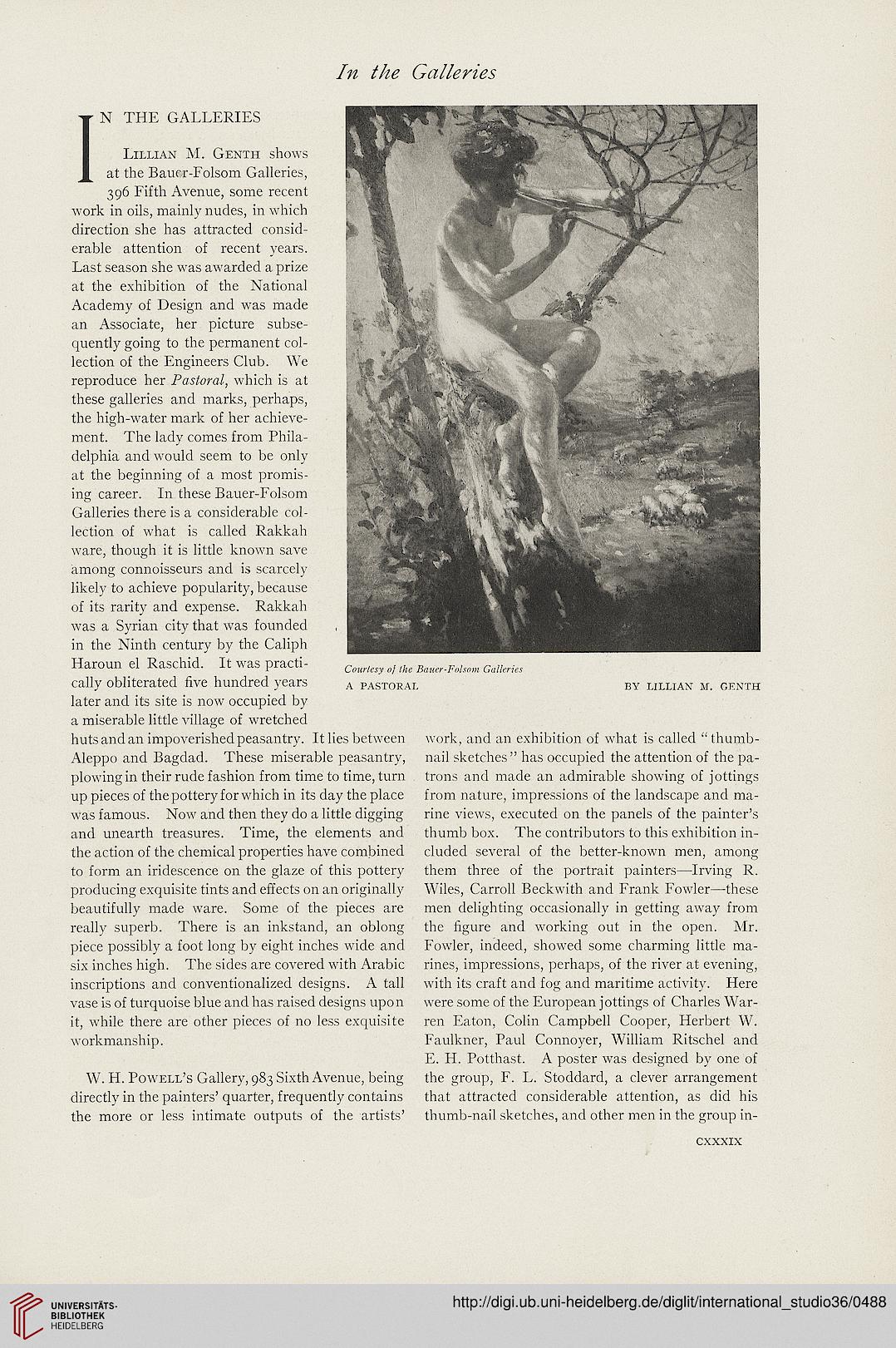 
y N THE GALLERIES
LlLLIAN M. GENTH sllOWS
at the Bauer-Fotsom GaHeries,
396 Fifth Avenue, some recent
work in oils, mainly nudes, in which
direction she has attracted consid-
erable attention of recent years.
Last season she was awarded a prize
at the exhibition of the Nationai
Academy of Design and was made
an Associate, her picture subse-
quentiy going to the permanent coi-
lection of the Engineers Club. We
reproduce her Ruxtorof, which is at
these galieries and marks, perhaps,
the high-water mark of her achieve-
ment. The lady comes from Phiia-
delphia and wouid seem to be oniy
at the beginning of a most promis-
ing career. In these Bauer-Foisom
Galleries there is a considerabie col-
lection of what is calied Rakkah
ware, though it is little known save
among connoisseurs and is scarcely
iikeiy to achieve popuiarity, because
of its rarity and expense. Rakkah
was a Syrian city that was founded
in the Ninth century by the Caiiph
Haroun ei Raschid. It was practi-
caily obiiterated hve hundred years
later and its site is now occupied by
a miserable Httle village of wretched
huts and an impoverishedpeasantry. It lies between
Aleppo and Bagdad. These miserable peasantry,
plowing in their rude fashion from time to time, turn
up pieces of thepottery forwhich in its day the place
was famous. Now and then they do a little digging
and unearth treasures. Time, the elements and
the action of the chemical properties have combined
to form an iridescence on the glaze of this pottery
producing exquisite tints and effects on an originally
beautifully made ware. Some of the pieces are
really superb. There is an inkstand, an oblong
piece possibly a foot long by eight inches wide and
six inches high. The sides are covered with Arabic
inscriptions and conventionalized designs. A tall
vase is of turquoise blue and has raised designs upon
it, while there are other pieces of no less exquisite
workmanship.
W. H. PowELL's Gallery, 983 Sixth Avenue, being
directly in the painters' quarter, frequently contains
the more or less intimate outputs of the artists'

work, and an exhibition of what is called " thumb-
nail sketches " has occupied the attention of the pa-
trons and made an admirable showing of jottings
from nature, impressions of the landscape and ma-
rine views, executed on the panels of the painter's
thumb box. The contributors to this exhibition in-
cluded several of the better-known men, among
them three of the portrait painters—Irving R.
Wiies, Carroll Beckwith and Frank Fowler—these
men delighting occasionally in getting away from
the hgure and working out in the open. Mr.
Fowler, indeed, showed some charming little ma-
rines, impressions, perhaps, of the river at evening,
with its craft and fog and maritime activity. Here
were some of the European jottings of Charles War-
ren Eaton, Colin Campbell Cooper, Herbert W.
Faulkner, Paul Connoyer, William Ritschel and
E. H. Potthast. A poster was designed by one of
the group, F. L. Stoddard, a clever arrangement
that attracted considerable attention, as did his
thumb-nail sketches, and other men in the group in-