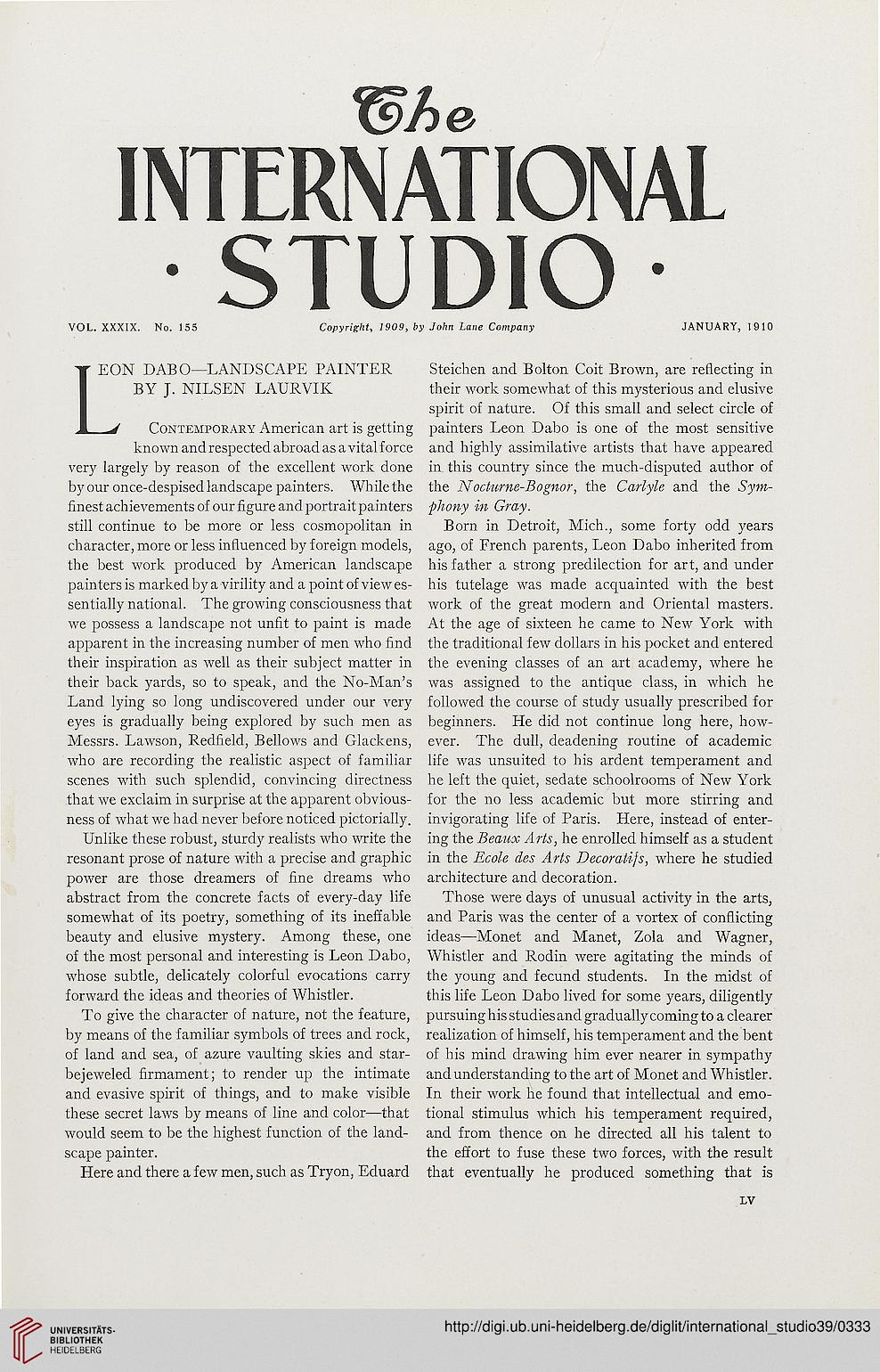 1EON DABO—LANDSCAPE PAINTER Steichen and Bolton Coit Brown, are reflecting in
BY J. NILSEN LAURVIK their work somewhat of this mysterious and elusive
spirit of nature. Of this small and select circle of
_J Contemporary American art is getting painters Leon Dabo is one of the most sensitive

knownandrespectedabroadasavitalforce and highly assimilative artists that have appeared

very largely by reason of the excellent work done in. this country since the much-disputed author of

by our once-despised landscape painters. While the the Nocturne-Bognor, the Carlyle and the Sym-

finest achievements of our figure and portrait painters phony in Gray.

still continue to be more or less cosmopolitan in Born in Detroit, Mich., some forty odd years
character, more or less influenced by foreign models, ago, of French parents, Leon Dabo inherited from
the best work produced by American landscape his father a strong predilection for art, and under
painters is marked by a virility and a point of view es- his tutelage was made acquainted with the best
sentially national. The growing consciousness that work of the great modern and Oriental masters,
we possess a landscape not unfit to paint is made At the age of sixteen he came to New York with
apparent in the increasing number of men who find the traditional few dollars in his pocket and entered
their inspiration as well as their subject matter in the evening classes of an art academy, where he
their back yards, so to speak, and the No-Man's was assigned to the antique class, in which he
Land lying so long undiscovered under our very followed the course of study usually prescribed for
eyes is gradually being explored by such men as beginners. He did not continue long here, how-
Messrs. Lawson, Redfield, Bellows and Glackens, ever. The dull, deadening routine of academic
who are recording the realistic aspect of familiar life was unsuited to his ardent temperament and
scenes with such splendid, convincing directness he left the quiet, sedate schoolrooms of New York
that we exclaim in surprise at the apparent obvious- for the no less academic but more stirring and
ness of what we had never before noticed pictorially. invigorating life of Paris. Here, instead of enter-
Unlike these robust, sturdy realists who write the ing the Beaux Arts, he enrolled himself as a student
resonant prose of nature with a precise and graphic in the Ecole des Arts Decoratijs, where he studied
power are those dreamers of fine dreams who architecture and decoration.

abstract from the concrete facts of every-day life Those were days of unusual activity in the arts,

somewhat of its poetry, something of its ineffable and Paris was the center of a vortex of conflicting

beauty and elusive mystery. Among these, one ideas—Monet and Manet, Zola and Wagner,

of the most personal and interesting is Leon Dabo, Whistler and Rodin were agitating the minds of

whose subtle, delicately colorful evocations carry the young and fecund students. In the midst of

forward the ideas and theories of Whistler. this life Leon Dabo lived for some years, diligently

To give the character of nature, not the feature, pursuinghisstudiesandgraduallycomingtoaclearer

by means of the familiar symbols of trees and rock, realization of himself, his temperament and the bent

of land and sea, of azure vaulting skies and star- of his mind drawing him ever nearer in sympathy

bejeweled firmament; to render up the intimate and understanding to the art of Monet and Whistler,

and evasive spirit of things, and to make visible In their work he found that intellectual and emo-

these secret laws by means of line and color—that tional stimulus which his temperament required,

scape painter. the effort to fuse these two forces, with the result

Here and there a few men, such as Tryon, Eduard that eventually he produced something that is