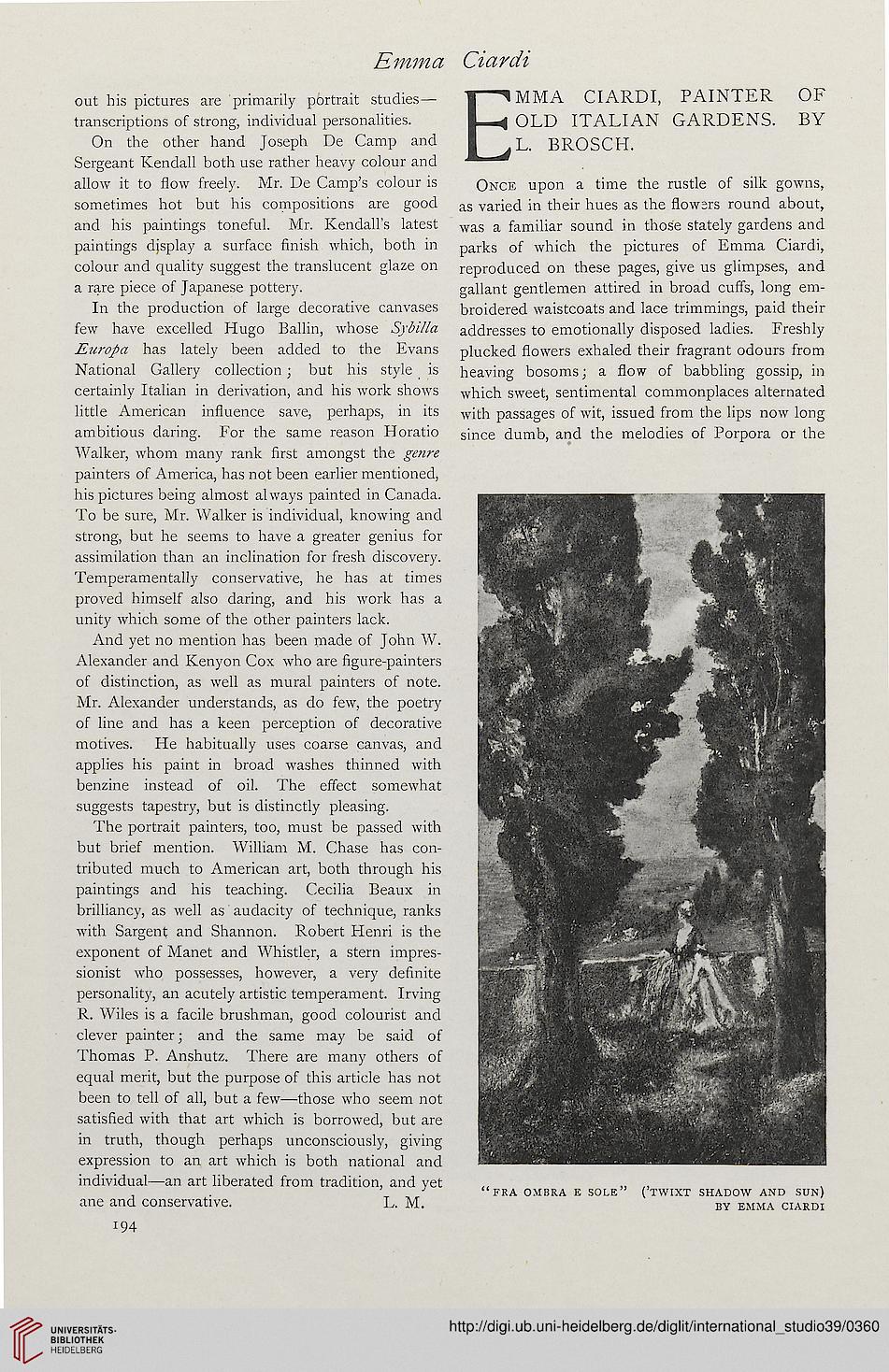 out his pictures are primarily portrait studies—
transcriptions of strong, individual personalities.

On the other hand Joseph De Camp and
Sergeant Kendall both use rather heavy colour and
allow it to flow freely. Mr. De Camp's colour is
sometimes hot but his compositions are good
and his paintings toneful. Mr. Kendall's latest
paintings display a surface finish which, both in
colour and quality suggest the translucent glaze on
a rare piece of Japanese pottery.

In the production of large decorative canvases
few have excelled Hugo Ballin, whose Sybilla
Europa has lately been added to the Evans
National Gallery collection; but his style is
certainly Italian in derivation, and his work shows
little American influence save, perhaps, in its
ambitious daring. For the same reason Horatio
Walker, whom many rank first amongst the genre
painters of America, has not been earlier mentioned,
his pictures being almost always painted in Canada.
To be sure, Mr. Walker is individual, knowing and
strong, but he seems to have a greater genius for
assimilation than an inclination for fresh discovery.
Temperamentally conservative, he has at times
proved himself also daring, and his work has a
unity which some of the other painters lack.

And yet no mention has been made of John W.
Alexander and Kenyon Cox who are figure-painters
of distinction, as well as mural painters of note.
Mr. Alexander understands, as do few, the poetry
of line and has a keen perception of decorative
motives. He habitually uses coarse canvas, and
applies his paint in broad washes thinned with
benzine instead of oil. The effect somewhat
suggests tapestry, but is distinctly pleasing.

The portrait painters, too, must be passed with
but brief mention. William M. Chase has con-
tributed much to American art, both through his
paintings and his teaching. Cecilia Beaux in
brilliancy, as well as audacity of technique, ranks
with Sargent and Shannon. Robert Henri is the
exponent of Manet and Whistler, a stern impres-
sionist who possesses, however, a very definite
personality, an acutely artistic temperament. Irving
R. Wiles is a facile brushman, good colourist and
clever painter; and the same may be said of
Thomas P. Anshutz. There are many others of
equal merit, but the purpose of this article has not
been to tell of all, but a few—those who seem not
satisfied with that art which is borrowed, but are
in truth, though perhaps unconsciously, giving
expression to an art which is both national and
individual—an art liberated from tradition, and yet
ane and conservative. L. M.

Once upon a time the rustle of silk gowns,
as varied in their hues as the flowers round about,
was a familiar sound in those stately gardens and
parks of which the pictures of Emma Ciardi,
reproduced on these pages, give us glimpses, and
gallant gentlemen attired in broad cuffs, long em-
broidered waistcoats and lace trimmings, paid their
addresses to emotionally disposed ladies. Freshly
plucked flowers exhaled their fragrant odours from
heaving bosoms; a flow of babbling gossip, in
which sweet, sentimental commonplaces alternated
with passages of wit, issued from the lips now long
since dumb, and the melodies of Porpora or the