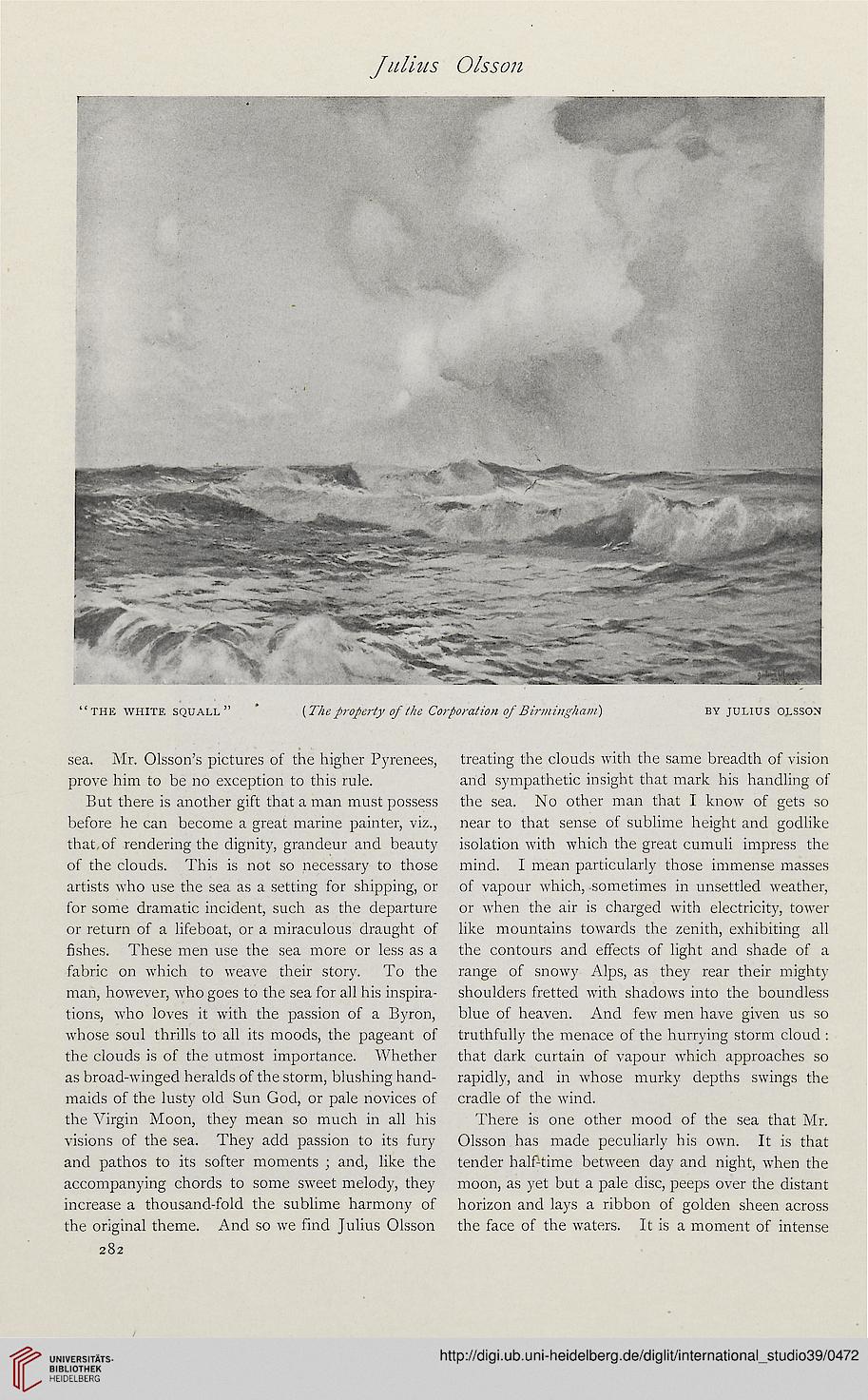 "the white squall" * (Theproperty of the Corporation ofBirmingham) by julius olsson

sea. Mr. Olsson's pictures of the higher Pyrenees, treating the clouds with the same breadth of vision

prove him to be no exception to this rule. and sympathetic insight that mark his handling of

But there is another gift that a man must possess the sea. No other man that I know of gets so

before he can become a great marine painter, viz., near to that sense of sublime height and godlike

that,of rendering the dignity, grandeur and beauty isolation with which the great cumuli impress the

of the clouds. This is not so necessary to those mind. I mean particularly those immense masses

artists who use the sea as a setting for shipping, or of vapour which, sometimes in unsettled weather,

for some dramatic incident, such as the departure or when the air is charged with electricity, tower

or return of a lifeboat, or a miraculous draught of like mountains towards the zenith, exhibiting all

fishes. These men use the sea more or less as a the contours and effects of light and shade of a

fabric on which to weave their story. To the range of snowy Alps, as they rear their mighty

man, however, who goes to the sea for all his inspira- shoulders fretted with shadows into the boundless

tions, who loves it with the passion of a Byron, blue of heaven. And few men have given us so

whose soul thrills to all its moods, the pageant of truthfully the menace of the hurrying storm cloud :

the clouds is of the utmost importance. Whether that dark curtain of vapour which approaches so

as broad-winged heralds of the storm, blushing hand- rapidly, and in whose murky depths swings the

maids of the lusty old Sun God, or pale novices of cradle of the wind.

the Virgin Moon, they mean so much in all his There is one other mood of the sea that Mr.

visions of the sea. They add passion to its fury Olsson has made peculiarly his own. It is that

and pathos to its softer moments ; and, like the tender half-time between day and night, when the

accompanying chords to some sweet melody, they moon, as yet but a pale disc, peeps over the distant

the original theme. And so we find Julius Olsson the face of the waters. It is a moment of intense