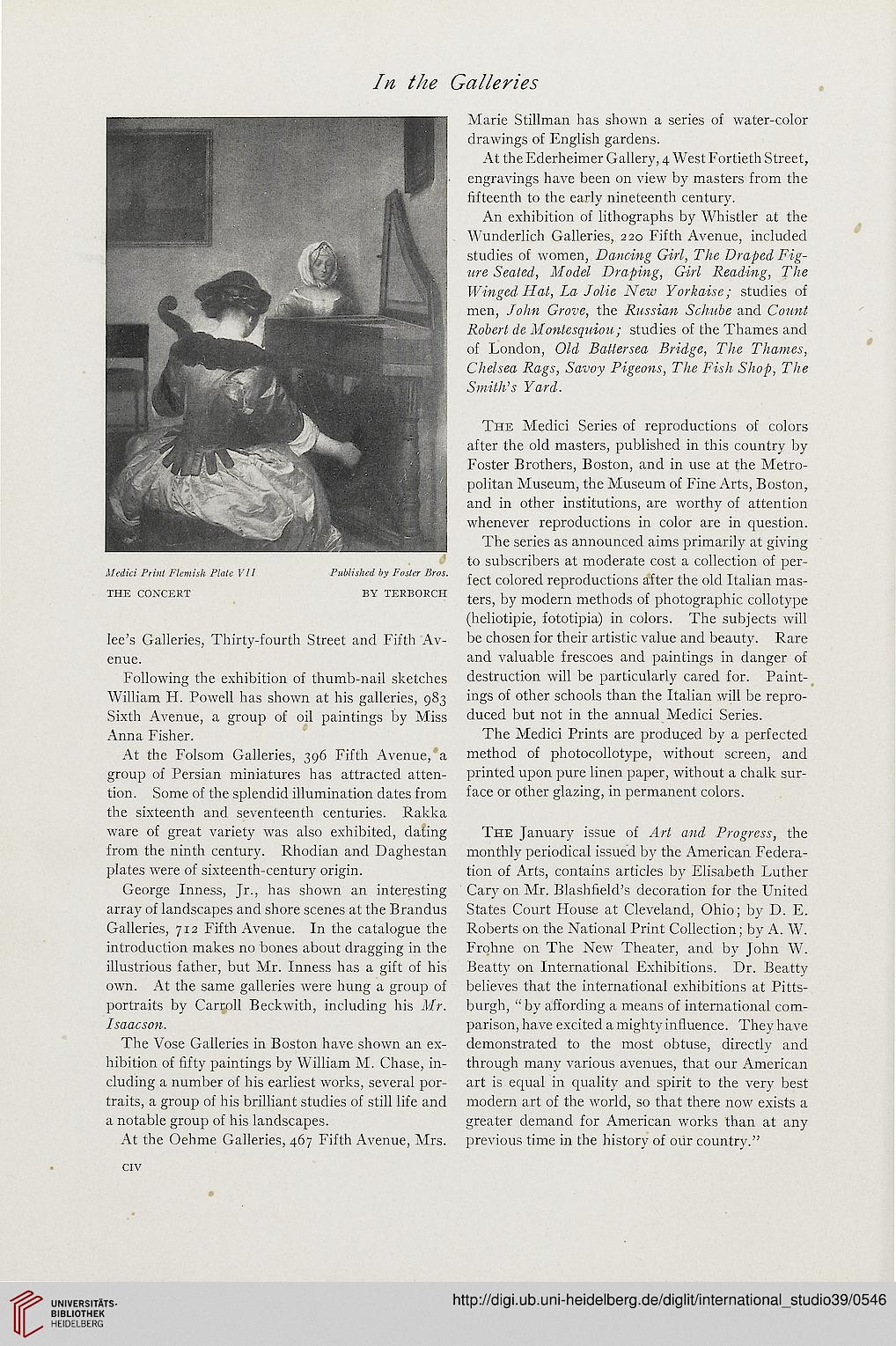 the concert by terborch

Following the exhibition of thumb-nail sketches
William H. Powell has shown at his galleries, 983
Sixth Avenue, a group of oil paintings by Miss
Anna Fisher.

At the Folsom Galleries, 396 Fifth Avenue, *a
group of Persian miniatures has attracted atten-
tion. Some of the splendid illumination dates from
the sixteenth and seventeenth centuries. Rakka
ware of great variety was also exhibited, dating
from the ninth century. Rhodian and Daghestan
plates were of sixteenth-century origin.

George Inness, Jr., has shown an interesting
array of landscapes and shore scenes at the Brandus
Galleries, 712 Fifth Avenue. In the catalogue the
introduction makes no bones about dragging in the
illustrious father, but Mr. Inness has a gift of his
own. At the same galleries were hung a group of
portraits by Carroll Beckwith, including his Mr.
Isaacson.

The Vose Galleries in Boston have shown an ex-
hibition of fifty paintings by William M. Chase, in-
cluding a number of his earliest works, several por-
traits, a group of his brilliant studies of still life and
a notable group of his landscapes.

Marie Stillman has shown a series of water-color
drawings of English gardens.

At the Ederheimer Gallery, 4 West Fortieth Street,
engravings have been on view by masters from the
fifteenth to the early nineteenth century.

The Medici Series of reproductions of colors
after the old masters, published in this country by
Foster Brothers, Boston, and in use at the Metro-
politan Museum, the Museum of Fine Arts, Boston,
and in other institutions, are worthy of attention
whenever reproductions in color are in question.

The series as announced aims primarily at giving
to subscribers at moderate cost a collection of per-
fect colored reproductions after the old Italian mas-
ters, by modern methods of photographic collotype
(heliotipie, fototipia) in colors. The subjects will
be chosen for their artistic value and beauty. Rare
and valuable frescoes and paintings in danger of
destruction will be particularly cared for. Paint-
ings of other schools than the Italian will be repro-
duced but not in the annual Medici Series.

The Medici Prints are produced by a perfected
method of photocollotype, without screen, and
printed upon pure linen paper, without a chalk sur-
face or other glazing, in permanent colors.

The January issue of Art and Progress, the
monthly periodical issued by the American Federa-
tion of Arts, contains articles by Elisabeth Luther
Cary on Mr. Blashfield's decoration for the United
States Court House at Cleveland, Ohio; by D. E.
Roberts on the National Print Collection; by A. W.
Frohne on The New Theater, and by John W.
Beatty on International Exhibitions. Dr. Beatty
believes that the international exhibitions at Pitts-
burgh, " by affording a means of international com-
parison, have excited a mighty influence. They have
demonstrated to the most obtuse, directly and
through many various avenues, that our American
art is equal in quality and spirit to the very best
modern art of the world, so that there now exists a
greater demand for American works than at any
previous time in the history of our country."