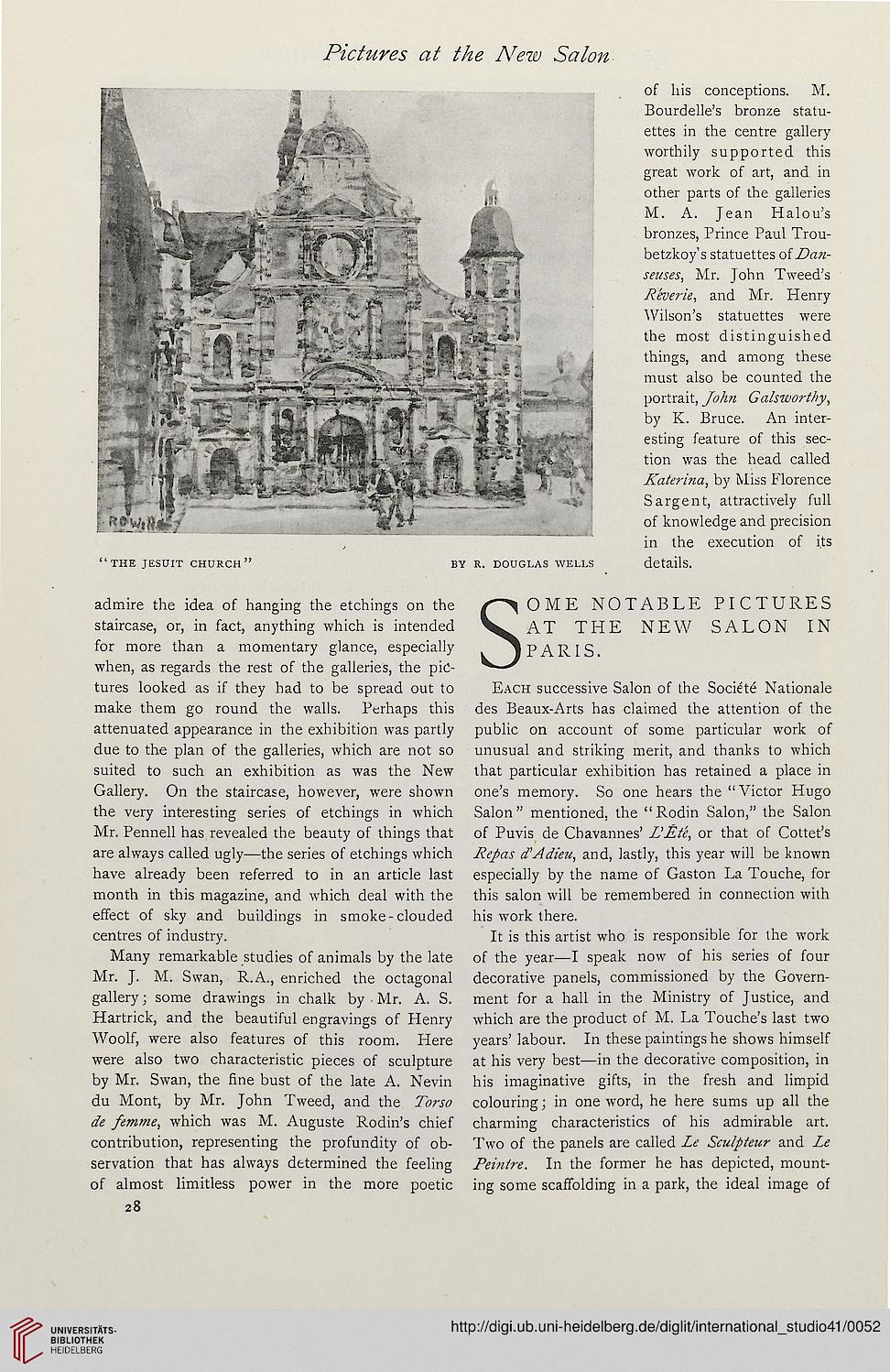 Information about OCR text
Pictures at the New Salon

admire the idea of hanging the etchings on the
staircase, or, in fact, anything which is intended
for more than a momentary glance, especially
when, as regards the rest of the galleries, the pic-
tures looked as if they had to be spread out to
make them go round the walls. Perhaps this
attenuated appearance in the exhibition was partly
due to the plan of the galleries, which are not so
suited to such an exhibition as was the New
Gallery. On the staircase, however, were shown
the very interesting series of etchings in which
Mr. Pennell has revealed the beauty of things that
are always called ugly—the series of etchings which
have already been referred to in an article last
month in this magazine, and which deal with the
effect of sky and buildings in smoke - clouded
centres of industry.

Many remarkable studies of animals by the late
Mr. J. M. Swan, R.A., enriched the octagonal
gallery; some drawings in chalk by • Mr. A. S.
Hartrick, and the beautiful engravings of Henry
Woolf, were also features of this room. Here
were also two characteristic pieces of sculpture
by Mr. Swan, the fine bust of the late A. Nevin
du Mont, by Mr. John Tweed, and the Torso
de femme, which was M. Auguste Rodin's chief
contribution, representing the profundity of ob-
servation that has always determined the feeling
of almost limitless power in the more poetic
28

of his conceptions. M.
Bourdelle's bronze statu-
ettes in the centre gallery
worthily supported this
great work of art, and in
other parts of the galleries
M. A. Jean Halou's
bronzes, Prince Paul Trou-
betzkoy's statuettes of Dan-
seuses, Mr. John Tweed's
Reverie, and Mr. Henry
Wilson's statuettes were
the most distinguished
things, and among these
must also be counted the
portrait, John Galsworthy,
by K. Bruce. An inter-
esting feature of this sec-
tion was the head called
Katerina, by Miss Florence
Sargent, attractively full
of knowledge and precision
in the execution of its
details.

Each successive Salon of the Socie'te Nationale
des Beaux-Arts has claimed the attention of the
public on account of some particular work of
unusual and striking merit, and thanks to which
that particular exhibition has retained a place in
one's memory. So one hears the "Victor Hugo
Salon" mentioned, the "Rodin Salon," the Salon
of Puvis de Cbavannes' L'Ete, or that of Cottet's
Repas d'Adieu, and, lastly, this year will be known
especially by the name of Gaston La Touche, for
this salon will be remembered in connection with
his work there.

It is this artist who is responsible for the work
of the year—I speak now of his series of four
decorative panels, commissioned by the Govern-
ment for a hall in the Ministry of Justice, and
which are the product of M. La Touche's last two
years' labour. In these paintings he shows himself
at his very best—in the decorative composition, in
his imaginative gifts, in the fresh and limpid
colouring; in one word, he here sums up all the
charming characteristics of his admirable art.
Two of the panels are called Le Sculpteur and Le
Peintre. In the former he has depicted, mount-
ing some scaffolding in a park, the ideal image of