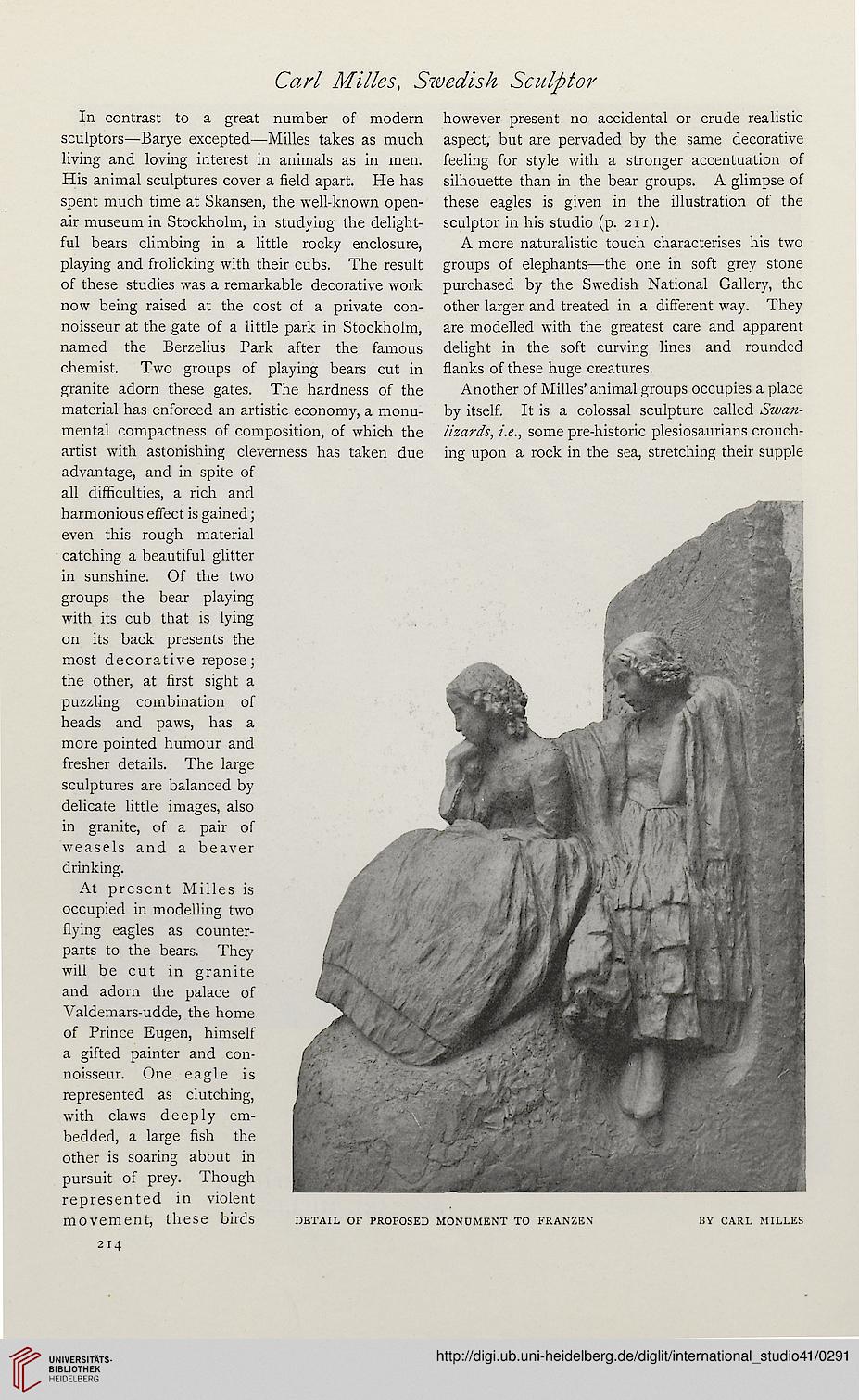 In contrast to a great number of modern however present no accidental or crude realistic
sculptors—Barye excepted—Milles takes as much aspect, but are pervaded by the same decorative
living and loving interest in animals as in men. feeling for style with a stronger accentuation of
His animal sculptures cover a field apart. He has silhouette than in the bear groups. A glimpse of
spent much time at Skansen, the well-known open- these eagles is given in the illustration of the
air museum in Stockholm, in studying the delight- sculptor in his studio (p. 211).
ful bears climbing in a little rocky enclosure, A more naturalistic touch characterises his two
playing and frolicking with their cubs. The result groups of elephants—the one in soft grey stone
of these studies was a remarkable decorative work purchased by the Swedish National Gallery, the
now being raised at the cost of a private con- other larger and treated in a different way. They
noisseur at the gate of a little park in Stockholm, are modelled with the greatest care and apparent
named the Berzelius Park after the famous delight in the soft curving lines and rounded
chemist. Two groups of playing bears cut in flanks of these huge creatures.

granite adorn these gates. The hardness of the Another of Milles'animal groups occupies a place
material has enforced an artistic economy, a monu- by itself. It is a colossal sculpture called Swan-
mental compactness of composition, of which the lizards, i.e., some pre-historic plesiosaurians crouch-
artist with astonishing cleverness has taken due ing upon a rock in the sea, stretching their supple
advantage, and in spite of
all difficulties, a rich and
harmonious effect is gained;
even this rough material
catching a beautiful glitter
in sunshine. Of the two
groups the bear playing
with its cub that is lying
on its back presents the
most decorative repose;
the other, at first sight a
puzzling combination of
heads and paws, has a
more pointed humour and
fresher details. The large
sculptures are balanced by
delicate little images, also
in granite, of a pair of
weasels and a beaver
drinking.

At present Milles is
occupied in modelling two
flying eagles as counter-
parts to the bears. They
will be cut in granite
and adorn the palace of
Valdemars-udde, the home
of Prince Eugen, himself
a gifted painter and con-
noisseur. One eagle is
represented as clutching,
with claws deeply em-
bedded, a large fish the
other is soaring about in
pursuit of prey. Though
represented in violent
movement, these birds detail of proposed monument to franzen by carl milles