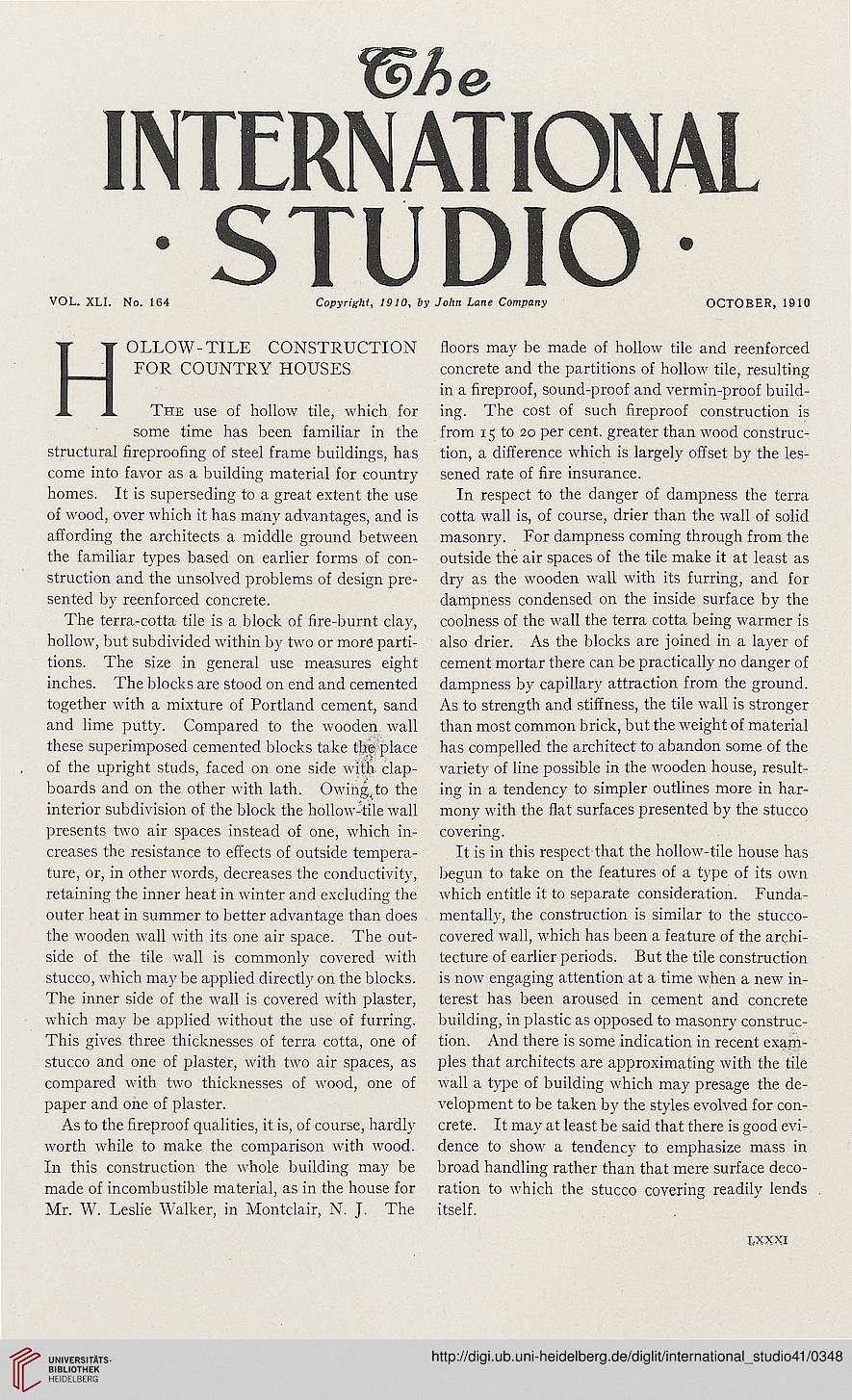 FOR COUNTRY HOUSES concrete and the partitions of hollow tile, resulting
in a fireproof, sound-proof and vermin-proof build-

The use of hollow tile, which for ing. The cost of such fireproof construction is

some time has been familiar in the from 15 to 20 per cent, greater than wood construc-

structural fireproofing of steel frame buildings, has tion, a difference which is largely offset by the les-

come into favor as a building material for country sened rate of fire insurance.

homes. It is superseding to a great extent the use In respect to the danger of dampness the terra
of wood, over which it has many advantages, and is cotta wall is, of course, drier than the wall of solid
affording the architects a middle ground between masonry. For dampness coming through from the
the familiar types based on earlier forms of con- outside the air spaces of the tile make it at least as
struction and the unsolved problems of design pre- dry as the wooden wall with its furring, and for
sen ted by reenforced concrete. dampness condensed on the inside surface by the
The terra-cotta tile is a block of fire-burnt clay, coolness of the wall the terra cotta being warmer is
hollow, but subdivided within by two or more parti- also drier. As the blocks are joined in a layer of
tions. The size in general use measures eight cement mortar there can be practically no danger of
inches. The blocks are stood on end and cemented dampness by capillary attraction from the ground,
together with a mixture of Portland cement, sand As to strength and stiffness, the tile wall is stronger
and lime putty. Compared to the wooden wall than most common brick, but the weight of material
these superimposed cemented blocks take the place has compelled the architect to abandon some of the
of the upright studs, faced on one side with clap- variety of line possible in the wooden house, result-
boards and on the other with lath. Owing^to the ing in a tendency to simpler outlines more in har-
interior subdivision of the block the hollow-tile wall mony with the flat surfaces presented by the stucco
presents two air spaces instead of one, which in- covering.

creases the resistance to effects of outside tempera- It is in this respect that the hollow-tile house has
ture, or, in other words, decreases the conductivity, begun to take on the features of a type of its own
retaining the inner heat in winter and excluding the which entitle it to separate consideration. Funda-
outer heat in summer to better advantage than does mentally, the construction is similar to the stucco-
the wooden wall with its one air space. The out- covered wall, which has been a feature of the archi-
side of the tile wall is commonly covered with tecture of earlier periods. But the tile construction
stucco, which may be applied directly on the blocks, is now engaging attention at a time when a new in-
The inner side of the wall is covered with plaster, terest has been aroused in cement and concrete
which may be applied without the use of furring, building, in plastic as opposed to masonry construc-
This gives three thicknesses of terra cotta, one of tion. And there is some indication in recent exam-
stucco and one of plaster, with two air spaces, as pies that architects are approximating with the tile
compared with two thicknesses of wood, one of wall a type of building which may presage the de-
paper and one of plaster. velopment to be taken by the styles evolved for con-
As to the fireproof qualities, it is, of course, hardly crete. It may at least be said that there is good evi-
worth while to make the comparison with wood, dence to show a tendency to emphasize mass in
In this construction the whole building may be broad handling rather than that mere surface deco-
made of incombustible material, as in the house for ration to which the stucco covering readily lends
Mr. W. Leslie Walker, in Montclair, N. J. The itself.