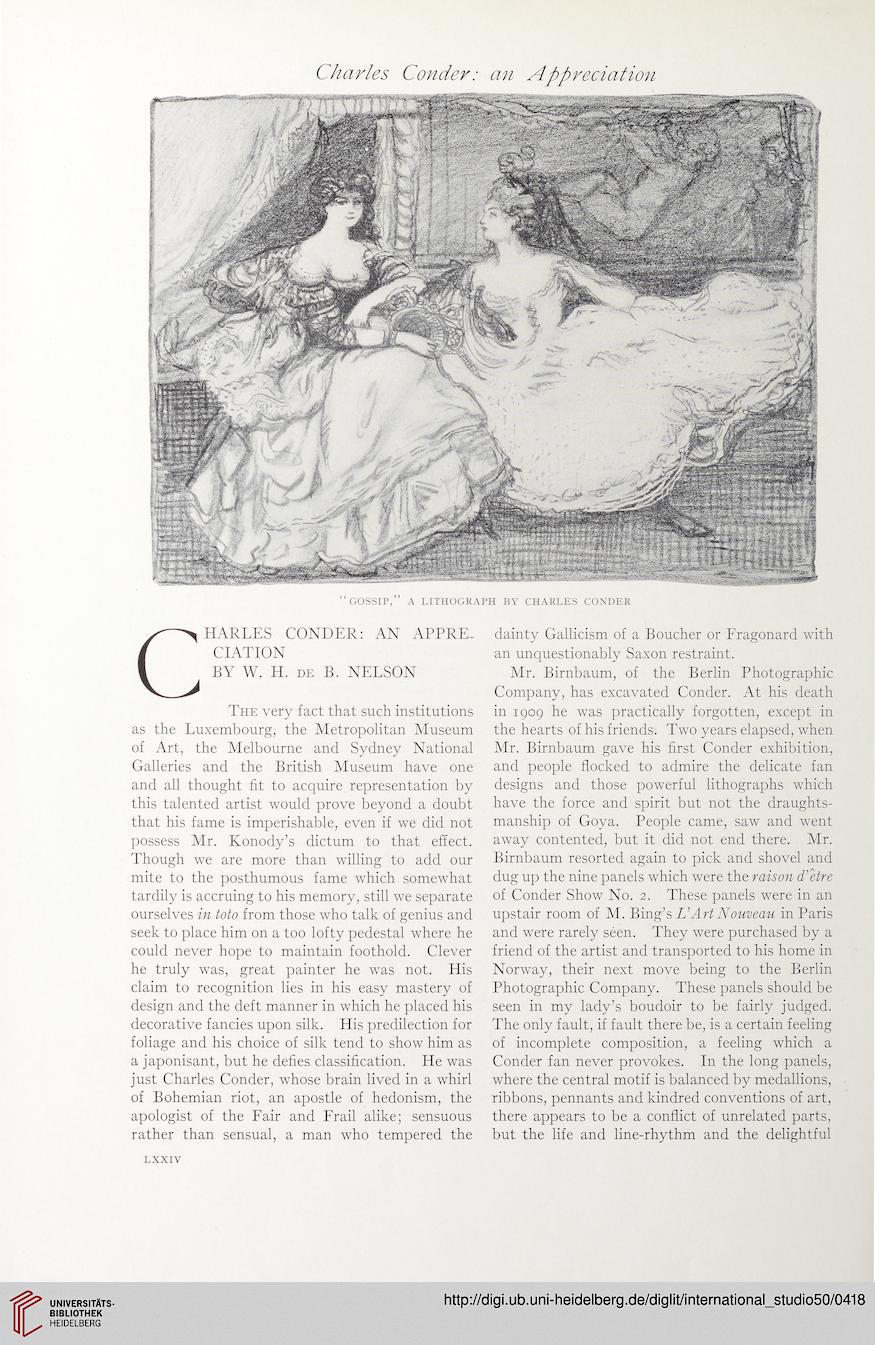 “GOSSIP,” A LITHOGRAPH BY CHARLES CONDER

CHARLES CONDER: AN APPRE-
CIATION
BY W. H. de B. NELSON
Ti-ie very fact that such institutions
as the Luxembourg, the Metropolitan Museum
of Art, the Melbourne and Sydney National
Galleries and the British Museum have one
and all thought fit to acquire representation by
this talented artist would prove beyond a doubt
that his fame is imperishable, even if we did not
possess Mr. Konody’s dictum to that effect.
Though we are more than willing to add our
mite to the posthumous fame which somewhat
tardily is accruing to his memory, still we separate
ourselves in toto from those who talk of genius and
seek to place him on a too lofty pedestal where he
could never hope to maintain foothold. Clever
he truly was, great painter he was not. His
claim to recognition lies in his easy mastery of
design and the deft manner in which he placed his
decorative fancies upon silk. His predilection for
foliage and his choice of silk tend to show him as
a japonisant, but he defies classification. He was
just Charles Conder, whose brain lived in a whirl
of Bohemian riot, an apostle of hedonism, the
apologist of the Fair and Frail alike; sensuous
rather than sensual, a man who tempered the

dainty Gallicism of a Boucher or Fragonard with
an unquestionably Saxon restraint.
Mr. Birnbaum, of the Berlin Photographic
Company, has excavated Conder. At his death
in 1909 he was practically forgotten, except in
the hearts of his friends. Two years elapsed, when
Mr. Birnbaum gave his first Conder exhibition,
and people flocked to admire the delicate fan
designs and those powerful lithographs which
have the force and spirit but not the draughts-
manship of Goya. People came, saw and went
away contented, but it did not end there. Mr.
Birnbaum resorted again to pick and shovel and
dug up the nine panels which were the raison d'etre
of Conder Show No. 2. These panels were in an
upstair room of M. Bing’s L'Art Nouveau in Paris
and were rarely seen. They were purchased by a
friend of the artist and transported to his home in
Norway, their next move being to the Berlin
Photographic Company. These panels should be
seen in my lady’s boudoir to be fairly judged.
The only fault, if fault there be, is a certain feeling
of incomplete composition, a feeling which a
Conder fan never provokes. In the long panels,
where the central motif is balanced by medallions,
ribbons, pennants and kindred conventions of art,
there appears to be a conflict of unrelated parts,
but the life and line-rhythm and the delightful