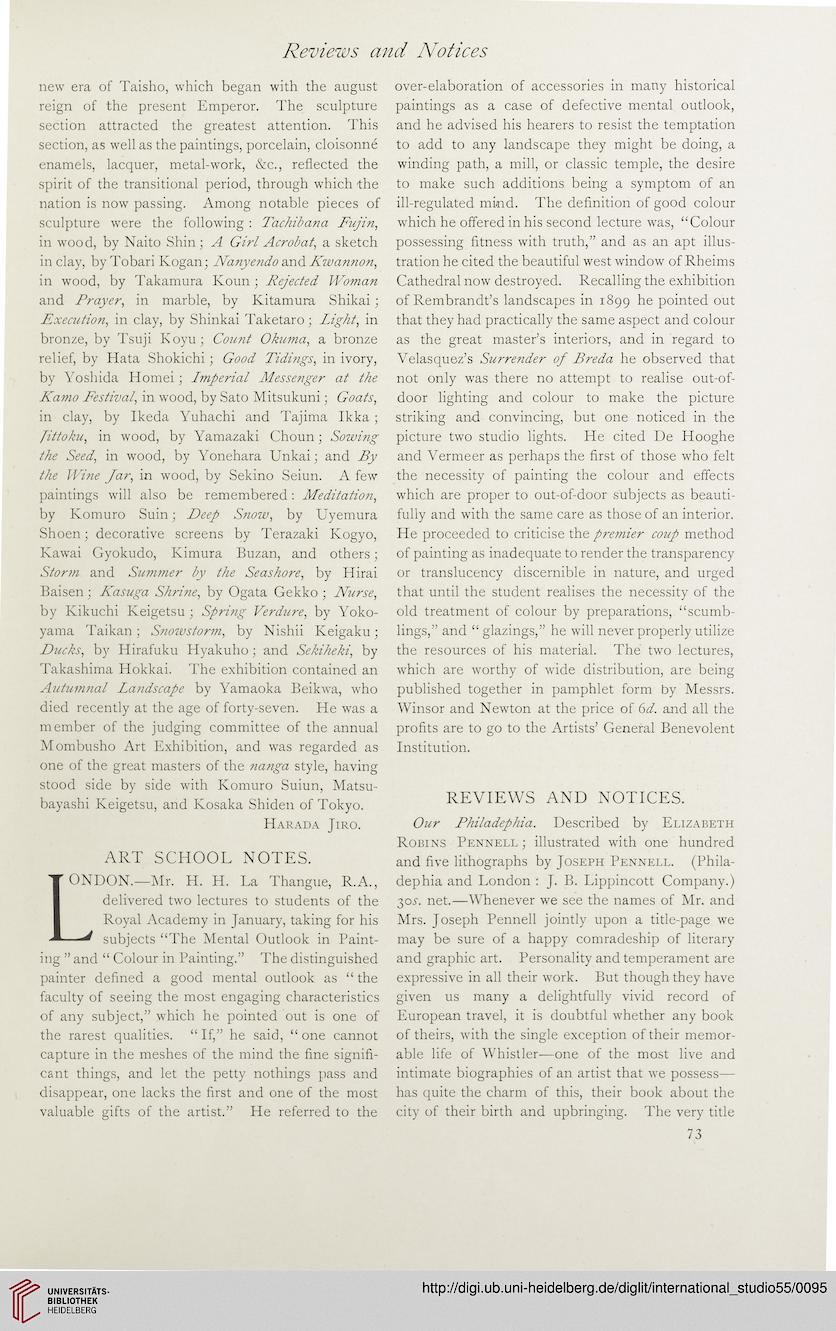 new era of Taisho, which began with the august
reign of the present Emperor. The sculpture
section attracted the greatest attention. This
section, as well as the paintings, porcelain, cloisonne
enamels, lacquer, metal-work, &c., reflected the
spirit of the transitional period, through which the
nation is now passing. Among notable pieces of
sculpture were the following : Tachibana Fujin,
in wood, by Naito Shin; A Girl Acrobat, a sketch
in clay, byTobari Kogan; Nanyendo and Kwannon,
in wood, by Takamura Koun ; Rejected Woman
and Prayer, in marble, by Kitamura Shikai;
Execution, in clay, by Shinkai Taketaro; Light, in
bronze, by Tsuji Koyu; Count Okuma, a bronze
relief, by Hata Shokichi; Good Tidings, in ivory,
by Yoshida Homei; Imperial Messenger at the
Kamo Festival, in wood, by Sato Mitsukuni; Goats,
in clay, by Ikeda Yuhachi and Tajima Ikka ;
jittoku, in wood, by Yamazaki Choun; Sowing
the Seed, in wood, by Yonehara Unkai; and
the Wine Jar, in wood, by Sekino Seiun. A few
paintings will also be remembered: Meditation,
by Komuro Suin; Deep Snow, by Uyemura
Shoen; decorative screens by Terazaki Kogyo,
Kawai Gyokudo, Kimura Buzan, and others;
Storm and Slimmer by the Seashore, by Hirai
Baisen; Kasuga Shrine, by Ogata Gekko ; Nurse,
by Kikuchi Keigetsu ; Spring Verdure, by Yoko-
yama Taikan; Snowstorm, by Nishii Keigaku;
Ducks, by Hirafuku Hyakuho; and Sekiheki, by
Takashima Hokkai. The exhibition contained an
Autumnal Landscape by Yamaoka Beikwa, who
died recently at the age of forty-seven. He was a
member of the judging committee of the annual
Mombusho Art Exhibition, and was regarded as
one of the great masters of the nanga style, having
stood side by side with Komuro Suiun, Matsu-
bayashi Keigetsu, and Kosaka Shiden of Tokyo.
Harada Jiro.
ART SCHOOL NOTES.
EDON.—Mr. H. H. La Thangue, R.A.,
delivered two lectures to students of the
Royal Academy in January, taking for his
subjects “The Mental Outlook in Paint-
ing ” and “ Colour in Painting.” The distinguished
painter defined a good mental outlook as “ the
faculty of seeing the most engaging characteristics
of any subject,” which he pointed out is one of
the rarest qualities. “If,” he said, “one cannot
capture in the meshes of the mind the fine signifi-
cant things, and let the petty nothings pass and
disappear, one lacks the first and one of the most
valuable gifts of the artist.” He referred to the

over-elaboration of accessories in many historical
paintings as a case of defective mental outlook,
and he advised his hearers to resist the temptation
to add to any landscape they might be doing, a
winding path, a mill, or classic temple, the desire
to make such additions being a symptom of an
ill-regulated mind. The definition of good colour
which he offered in his second lecture was, “Colour
possessing fitness with truth,” and as an apt illus-
tration he cited the beautiful west window of Rheims
Cathedral now destroyed. Recalling the exhibition
of Rembrandt’s landscapes in 1899 he pointed out
that they had practically the same aspect and colour
as the great master’s interiors, and in regard to
Velasquez’s Surrender of Breda he observed that
not only was there no attempt to realise out-of-
door lighting and colour to make the picture
striking and convincing, but one noticed in the
picture two studio lights. He cited De Hooghe
and Vermeer as perhaps the first of those who felt
the necessity of painting the colour and effects
which are proper to out-of-door subjects as beauti-
fully and with the same care as those of an interior.
He proceeded to criticise the premier coup method
of painting as inadequate to render the transparency
or translucency discernible in nature, and urged
that until the student realises the necessity of the
old treatment of colour by preparations, “scumb-
lings,” and “ glazings,” he will never properly utilize
the resources of his material. The two lectures,
which are worthy of wide distribution, are being
published together in pamphlet form by Messrs.
Winsor and Newton at the price of 6d. and all the
profits are to go to the Artists’ General Benevolent
Institution.
REVIEWS AND NOTICES.
Our Philadephia. Described by Elizabeth
Robins Pennell ; illustrated with one hundred
and five lithographs by Joseph Pennell. (Phila-
dephia and London : J. B. Lippincott Company.)
30s. net.—Whenever we see the names of Mr. and
Mrs. Joseph Pennell jointly upon a title-page we
may be sure of a happy comradeship of literary
and graphic art. Personality and temperament are
expressive in all their work. But though they have
given us many a delightfully vivid record of
European travel, it is doubtful whether any book
of theirs, with the single exception of their memor-
able life of Whistler—one of the most live and
intimate biographies of an artist that we possess—
has quite the charm of this, their book about the
city of their birth and upbringing. The very title
73