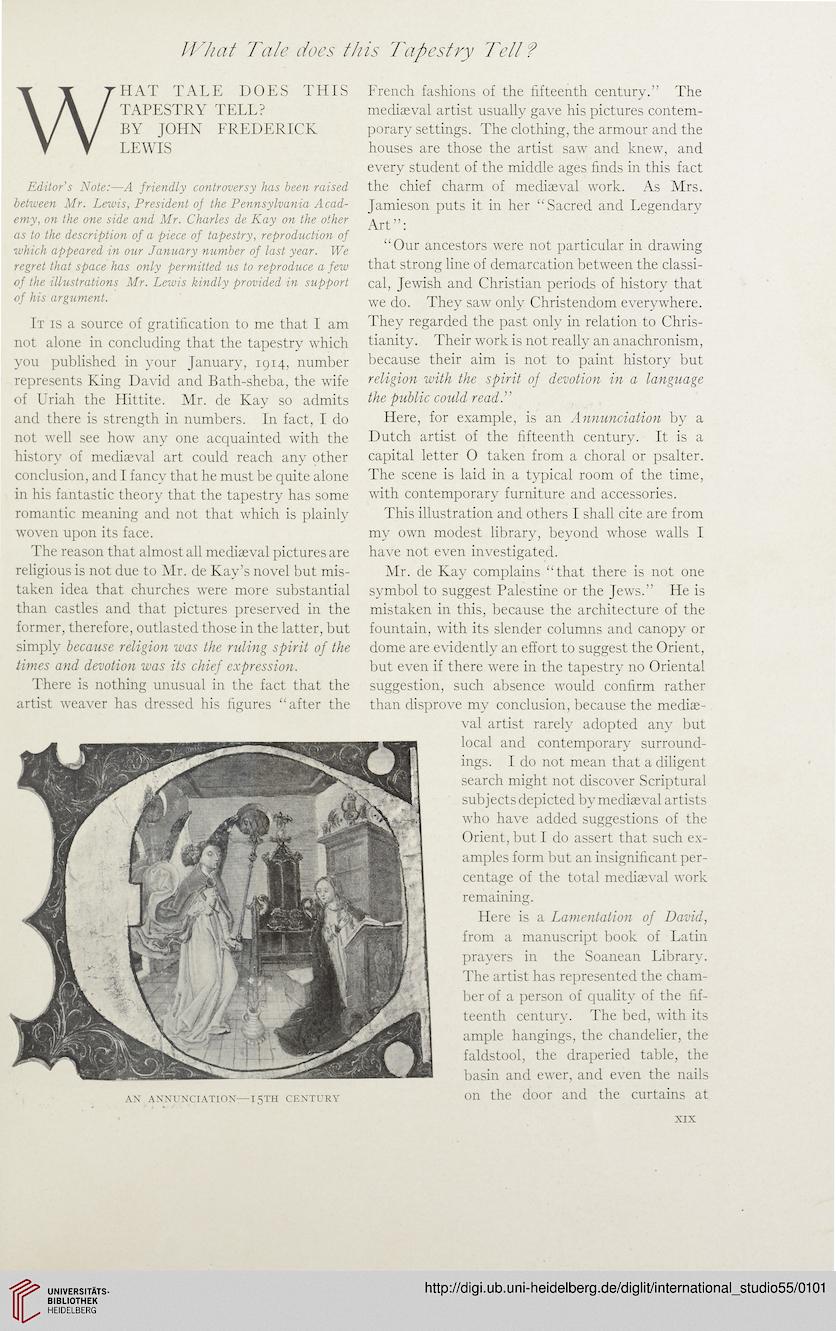 Information about OCR text
What Tale does this Tapestry Tell?

WHAT TALE DOES THIS
TAPESTRY TELL?
BY JOHN FREDERICK
LEWIS
Editor's Note:—A friendly controversy has been raised
between Mr. Lewis, President of the Pennsylvania Acad-
emy, on the one side and Mr. Charles de Kay on the other
as to the description of a piece of tapestry, reproduction of
which appeared in our January number of last year. We
regret that space has only permitted us to reproduce a few
of the illustrations Mr. Lewis kindly provided in support
of his argument.
It is a source of gratification to me that I am
not alone in concluding that the tapestry which
you published in your January, 1914, number
represents King David and Bath-sheba, the wife
of Uriah the Hittite. Mr. de Kay so admits
and there is strength in numbers. In fact, I do
not well see how any one acquainted with the
history of mediaeval art could reach any other
conclusion, and I fancy that he must be quite alone
in his fantastic theory that the tapestry has some
romantic meaning and not that which is plainly
woven upon its face.
The reason that almost all mediaeval pictures are
religious is not due to Mr. de Kay’s novel but mis-
taken idea that churches were more substantial
than castles and that pictures preserved in the
former, therefore, outlasted those in the latter, but
simply because religion was the ruling spirit of the
times and devotion was its chief expression.
There is nothing unusual in the fact that the
artist weaver has dressed his figures “after the

French fashions of the fifteenth century.” The
mediaeval artist usually gave his pictures contem-
porary settings. The clothing, the armour and the
houses are those the artist saw and knew, and
every student of the middle ages finds in this fact
the chief charm of mediaeval work. As Mrs.
Jamieson puts it in her “Sacred and Legendary
Art”:
“Our ancestors were not particular in drawing
that strong line of demarcation between the classi-
cal, Jewish and Christian periods of history that
we do. They saw only Christendom everywhere.
They regarded the past only in relation to Chris-
tianity. Their work is not really an anachronism,
because their aim is not to paint history but
religion with the spirit of devotion in a language
the public could read.”
Here, for example, is an Annunciation by a
Dutch artist of the fifteenth century. It is a
capital letter 0 taken from a choral or psalter.
The scene is laid in a typical room of the time,
with contemporary furniture and accessories.
This illustration and others I shall cite are from
my own modest library, beyond whose walls I
have not even investigated.
Mr. de Kay complains “that there is not one
symbol to suggest Palestine or the Jews.” He is
mistaken in this, because the architecture of the
fountain, with its slender columns and canopy or
dome are evidently an effort to suggest the Orient,
but even if there were in the tapestry no Oriental
suggestion, such absence would confirm rather
than disprove my conclusion, because the mediae-
val artist rarely adopted any but
local and contemporary surround-
ings. I do not mean that a diligent
search might not discover Scriptural
subjects depicted by mediaeval artists
who have added suggestions of the
Orient, but I do assert that such ex-
amples form but an insignificant per-
centage of the total mediaeval work
remaining.
Here is a Lamentation of David,
from a manuscript book of Latin
prayers in the Soanean Library.
The artist has represented the cham-
ber of a person of quality of the fif-
teenth century. The bed, with its
ample hangings, the chandelier, the
faldstool, the draperied table, the
basin and ewer, and even the nails
on the door and the curtains at