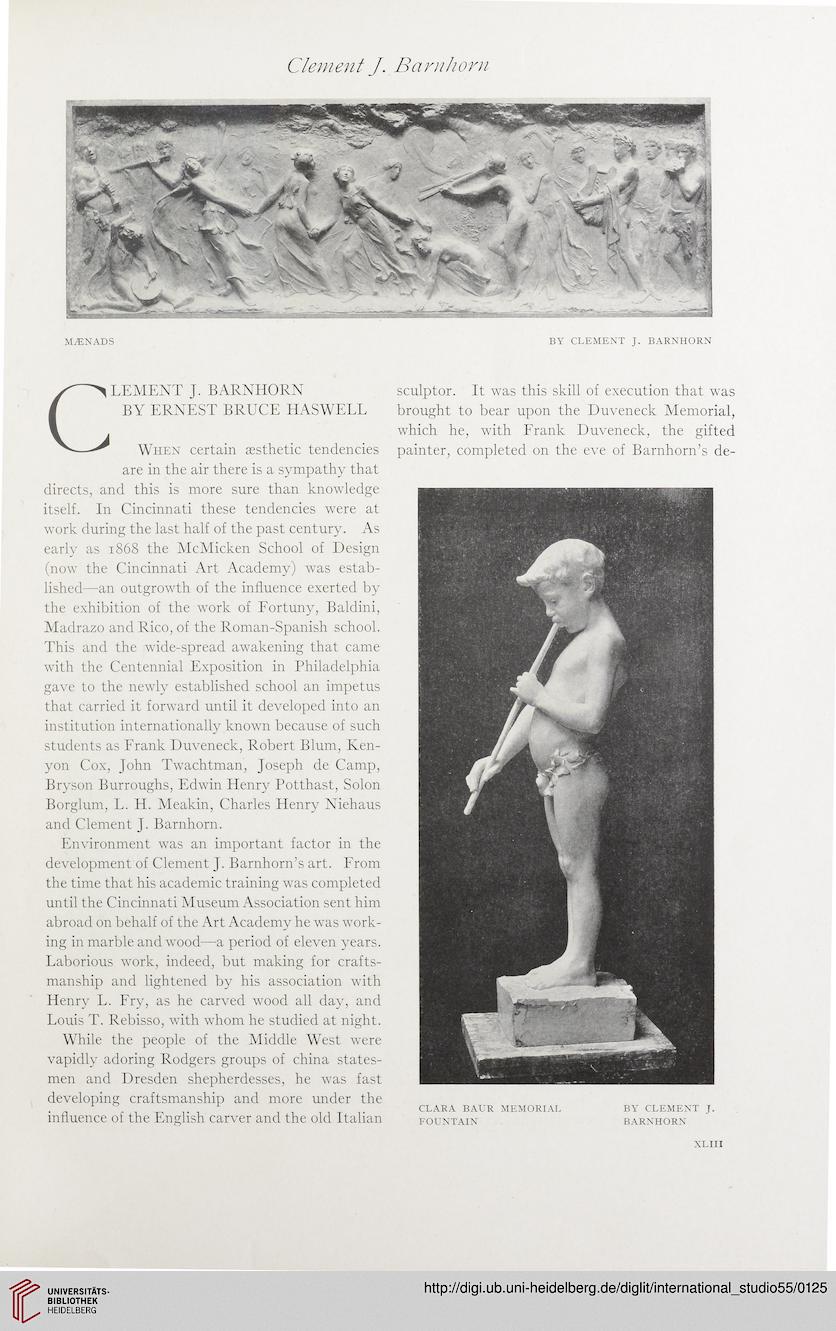 are in the air there is a sympathy that
directs, and this is more sure than knowledge
itself. In Cincinnati these tendencies were at
work during the last half of the past century. As
early as 1868 the McMicken School of Design
(now the Cincinnati Art Academy) was estab-
lished—an outgrowth of the influence exerted by
the exhibition of the work of Fortuny, Baldini,
Madrazo and Rico, of the Roman-Spanish school.
This and the wide-spread awakening that came
with the Centennial Exposition in Philadelphia
gave to the newly established school an impetus
that carried it forward until it developed into an
institution internationally known because of such
students as Frank Duveneck, Robert Blum, Ken-
yon Cox, John Twachtman, Joseph de Camp,
Bryson Burroughs, Edwin Henry Potthast, Solon
Borglum, L. H. Meakin, Charles Henry Niehaus
and Clement J. Barnhorn.
Environment was an important factor in the
development of Clement J. Barnhorn’s art. From
the time that his academic training was completed
until the Cincinnati Museum Association sent him
abroad on behalf of the Art Academy he was work-
ing in marble and wood—a period of eleven years.
Laborious work, indeed, but making for crafts-
manship and lightened by his association with
Henry L. Fry, as he carved wood all day, and
Louis T. Rebisso, with whom he studied at night.
While the people of the Middle West were
vapidly adoring Rodgers groups of china states-
men and Dresden shepherdesses, he was fast
developing craftsmanship and more under the
influence of the English carver and the old Italian

sculptor. It was this skill of execution that was
brought to bear upon the Duveneck Memorial,
which he, with Frank Duveneck, the gifted
painter, completed on the eve of Barnhorn’s de-