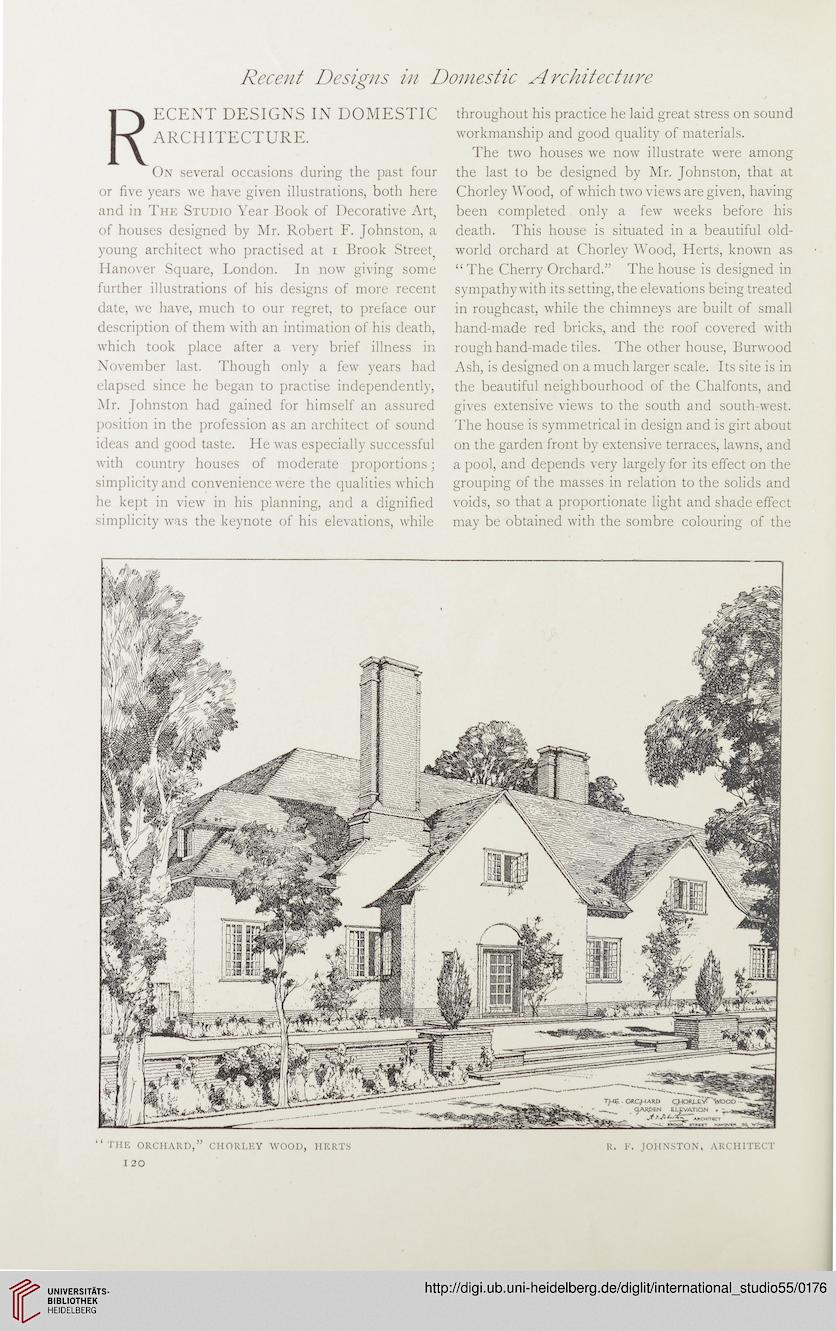 Recent designs in domestic
ARCHITECTURE.
On several occasions during the past four
or five years we have given illustrations, both here
and in The Studio Year Book of Decorative Art,
of houses designed by Mr. Robert F. Johnston, a
young architect who practised at i Brook Street
Hanover Square, London. In now giving some
further illustrations of his designs of more recent
date, we have, much to our regret, to preface our
description of them with an intimation of his death,
which took place after a very brief illness in
November last. Though only a few years had
elapsed since he began to practise independently,
Mr. Johnston had gained for himself an assured
position in the profession as an architect of sound
ideas and good taste. He was especially successful
with country houses of moderate proportions;
simplicity and convenience were the qualities which
he kept in view in his planning, and a dignified
simplicity was the keynote of his elevations, while

throughout his practice he laid great stress on sound
workmanship and good quality of materials.
The two houses we now illustrate were among
the last to be designed by Mr. Johnston, that at
Chorley Wood, of which two views are given, having
been completed only a few weeks before his
death. This house is situated in a beautiful old-
world orchard at Chorley Wood, Herts, known as
“ The Cherry Orchard.” The house is designed in
sympathy with its setting, the elevations being treated
in roughcast, while the chimneys are built of small
hand-made red bricks, and the roof covered with
rough hand-made tiles. The other house, Burwood
Ash, is designed on a much larger scale. Its site is in
the beautiful neighbourhood of the Chaifonts, and
gives extensive views to the south and south-west.
The house is symmetrical in design and is girt about
on the garden front by extensive terraces, lawns, and
a pool, and depends very largely for its effect on the
grouping of the masses in relation to the solids and
voids, so that a proportionate light and shade effect
may be obtained with the sombre colouring of the