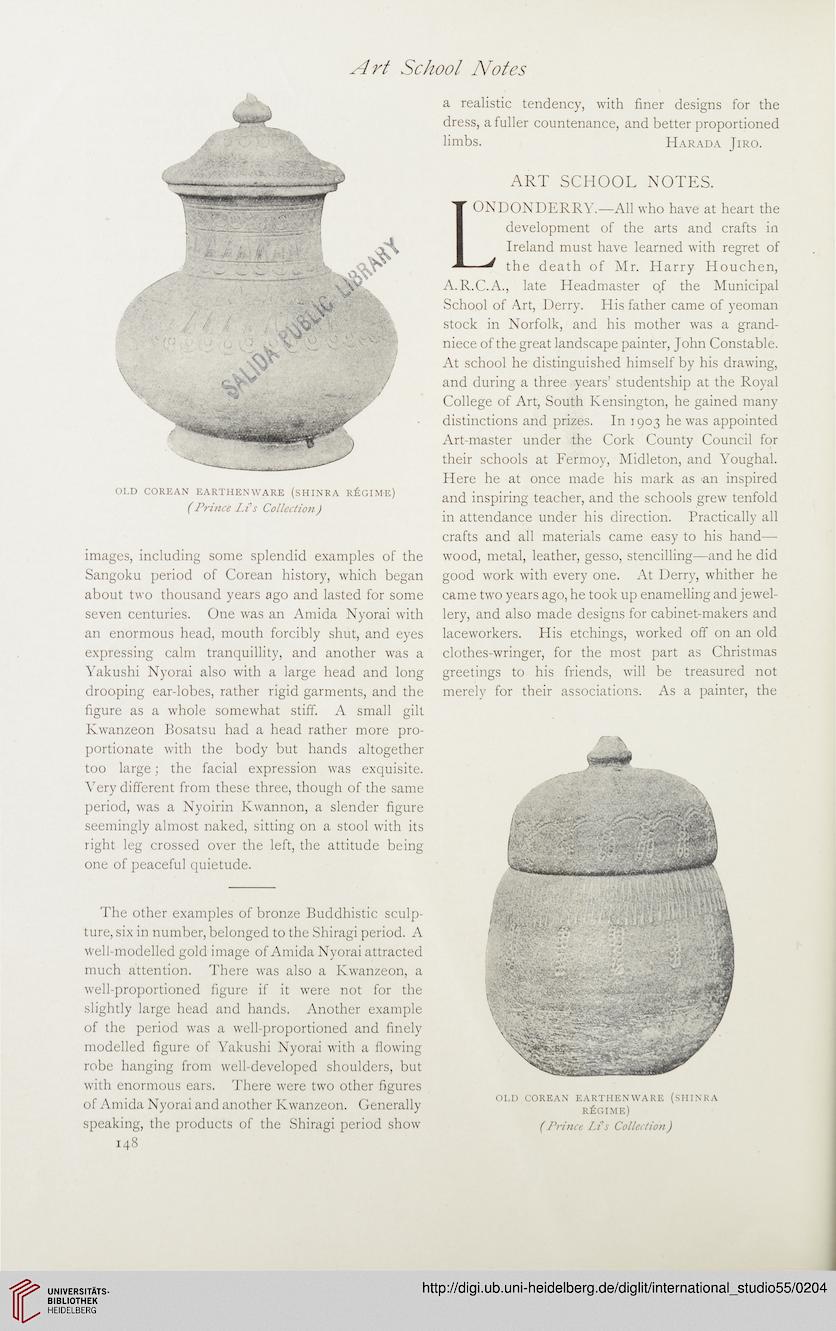 
images, including some splendid examples of the
Sangoku period of Corean history, which began
about two thousand years ago and lasted for some
seven centuries. One was an Amida Nyorai with
an enormous head, mouth forcibly shut, and eyes
expressing calm tranquillity, and another was a
Yakushi Nyorai also with a large head and long
drooping ear-lobes, rather rigid garments, and the
figure as a whole somewhat stiff. A small gilt
Kwanzeon Bosatsu had a head rather more pro-
portionate with the body but hands altogether
too large; the facial expression was exquisite.
Very different from these three, though of the same
period, was a Nyoirin Kwannon, a slender figure
seemingly almost naked, sitting on a stool with its
right leg crossed over the left, the attitude being
one of peaceful quietude.

The other examples of bronze Buddhistic sculp-
ture, six in number, belonged to the Shiragi period. A
Well-modelled gold image of Amida Nyorai attracted
much attention. There was also a Kwanzeon, a
well-proportioned figure if it were not for the
slightly large head and hands. Another example
of the period was a well-proportioned and finely
modelled figure of Yakushi Nyorai with a flowing
robe hanging from well-developed shoulders, but
with enormous ears. There were two other figures
of Amida Nyorai and another Kwanzeon. Generally
speaking, the products of the Shiragi period show
148

a realistic tendency, with finer designs for the
dress, a fuller countenance, and better proportioned
limbs. Harada Jiro.
ART SCHOOL NOTES.
EDONDERRY.—All who have at heart the
development of the arts and crafts in
Ireland must have learned with regret of
the death of Mr. Harry Houchen,
A.R.C.A., late Headmaster o.f the Municipal
School of Art, Derry. His father came of yeoman
stock in Norfolk, and his mother was a grand-
niece of the great landscape painter, John Constable.
At school he distinguished himself by his drawing,
and during a three years’ studentship at the Royal
College of Art, South Kensington, he gained many
distinctions and prizes. In 1903 he was appointed
Art-master under the Cork County Council for
their schools at Fermoy, Midleton, and Youghal.
Here he at once made his mark as 'an inspired
and inspiring teacher, and the schools grew tenfold
in attendance under his direction. Practically all
crafts and all materials came easy to his hand—-
wood, metal, leather, gesso, stencilling—and he did
good work with every one. At Derry, whither he
came two years ago, he took up enamelling and jewel-
lery, and also made designs for cabinet-makers and
laceworkers. His etchings, worked off on an old
clothes-wringer, for the most part as Christmas
greetings to his friends, will be treasured not
merely for their associations. As a painter, the