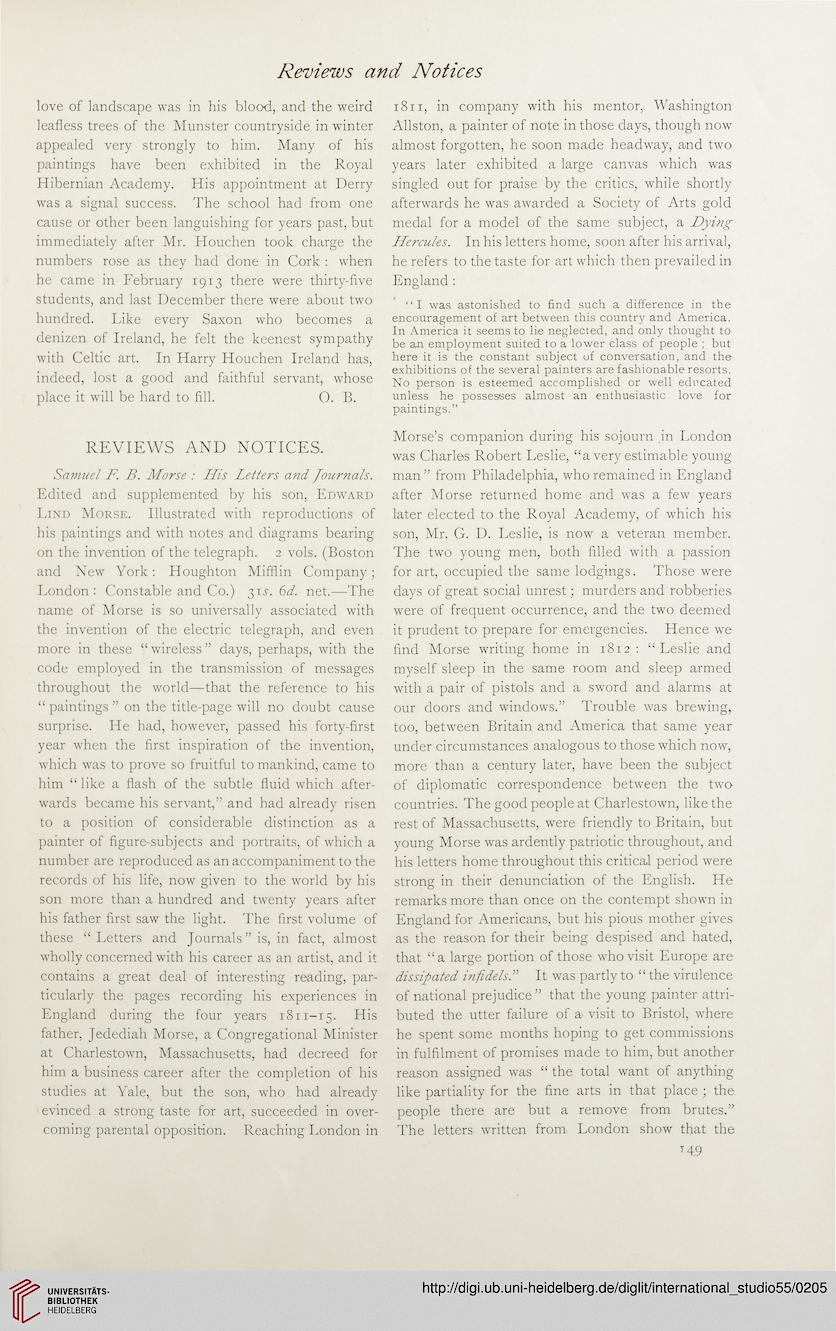 love of landscape was in his blood, and the weird
leafless trees of the Munster countryside in winter
appealed very strongly to him. Many of his
paintings have been exhibited in the Royal
Hibernian Academy. His appointment at Derry
was a signal success. The school had from one
cause or other been languishing for years past, but
immediately after Mr. Houchen took charge the
numbers rose as they had done in Cork : when
he came in February 1913 there were thirty-five
students, and last December there were about two
hundred. Like every Saxon who becomes a
denizen of Ireland, he felt the keenest sympathy
with Celtic art. In Harry Houchen Ireland has,
indeed, lost a good and faithful servant, whose
place it will be hard to fill. O. B.
REVIEWS AND NOTICES.
Samuel F. B. Morse : His Letters and Journals.
Edited and supplemented by his son, Edward
Lind Morse. Illustrated with reproductions of
his paintings and with notes and diagrams bearing
on the invention of the telegraph. 2 vols. (Boston
and New York: Houghton Mifflin Company;
London: Constable and Co.) 315'. 6d. net.—The
name of Morse is so universally associated with
the invention of the electric telegraph, and even
more in these “wireless” days, perhaps, with the
code employed in the transmission of messages
throughout the world—that the reference to his
“paintings” on the title-page will no doubt cause
surprise. He had, however, passed his forty-first
year when the first inspiration of the invention,
which was to prove so fruitful to mankind, came to
him “ like a flash of the subtle fluid which after-
wards became his servant,” and had already risen
to a position of considerable distinction as a
painter of figure-subjects and portraits, of which a
number are reproduced as an accompaniment to the
records of his life, now given to the world by his
son more than a hundred and twenty years after
his father first saw the light. The first volume of
these “Letters and Journals” is, in fact, almost
wholly concerned with his career as an artist, and it
contains a great deal of interesting reading, par-
ticularly the pages recording his experiences in
England during the four years 1811-15. His
father, Jedediah Morse, a Congregational Minister
at Charlestown, Massachusetts, had decreed for
him a business career after the completion of his
studies at Yale, but the son, who had already
evinced a strong taste for art, succeeded in over-
coming parental opposition. Reaching London in

1811, in company with his mentor, Washington
Allston, a painter of note in those days, though now
almost forgotten, he soon made headway, and two
years later exhibited a large canvas which was
singled out for praise by the critics, while shortly
afterwards he was awarded a Society of Arts gold
medal for a model of the same subject, a Dying
Hercules. In his letters home, soon after his arrival,
he refers to the taste for art which then prevailed in
England :
“I was astonished to find such a difference in the
encouragement of art between this country and America.
In America it seems to lie neglected, and only thought to
be an employment suited to a lower class of people ; but
here it is the constant subject of conversation, and the
exhibitions of the several painters are fashionable resorts.
No person is esteemed accomplished or well educated
unless he possesses almost an enthusiastic love for
paintings.”
Morse’s companion during his sojourn in London
was Charles Robert Leslie, “a very estimable young-
man” from Philadelphia, who remained in England
after Morse returned home and was a few years
later elected to the Royal Academy, of which his
son, Mr. G. D. Leslie, is now a veteran member.
The two young men, both filled with a passion
for art, occupied the same lodgings. Those were
days of great social unrest; murders and robberies
were of frequent occurrence, and the two deemed
it prudent to prepare for emergencies. Hence we
find Morse writing home in 1812 : “Leslie and
myself sleep in the same room and sleep armed
with a pair of pistols and a sword and alarms at
our doors and windows.” Trouble was brewing,
too, between Britain and America that same year
under circumstances analogous to those which now,
more than a century later, have been the subject
of diplomatic correspondence between the two
countries. The good people at Charlestown, like the
rest of Massachusetts, were friendly to Britain, but
young Morse was ardently patriotic throughout, and
his letters home throughout this critical period were
strong in their denunciation of the English. He
remarks more than once on the contempt shown in
England for Americans, but his pious mother gives
as the reason for their being despised and hated,
that “a large portion of those who visit Europe are
dissipated infidels.” It was partly to “ the virulence
of national prejudice” that the young painter attri-
buted the utter failure of a visit to Bristol, where
he spent some months hoping to get commissions
in fulfilment of promises made to him, but another
reason assigned was “ the total want of anything
like partiality for the fine arts in that place ; the
people there are but a remove from brutes.”
The letters written from London show that the